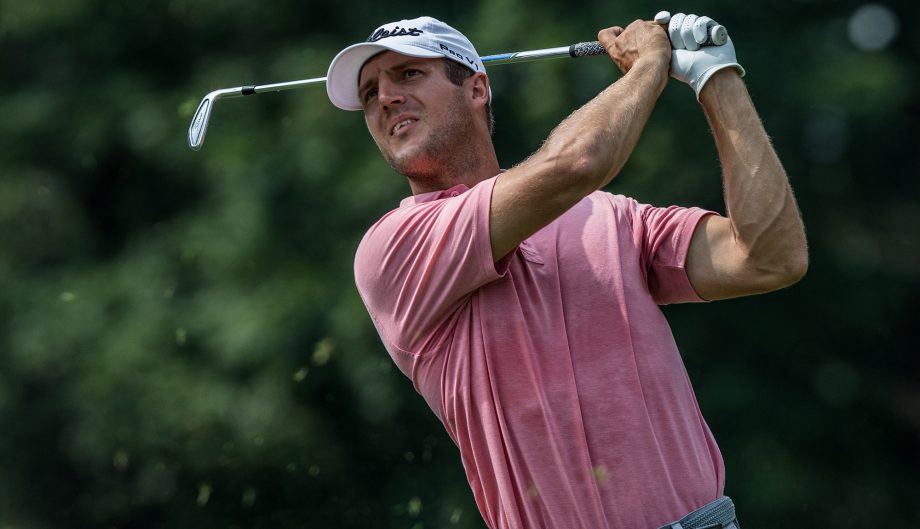 During his childhood years, Garrett Rank kept busy with his two biggest passions – hockey during the winters; and golf in the summers.

Today, at 29 years old, not much has changed for the now full-time National Hockey League referee, who also holds the distinction as one of Canada’s top ranked amateur golfers.

“I grew up in the small town of Elmira, Ontario and as a Canadian boy it was hockey in the winter time and golf in the summer,” said Rank, a former member of the national team program from 2012 -2014.

As a child, young Garrett would follow his father, Richard and his older brother, Kyle, to the golf course during the summers.

“My parents thought taking us to the golf course was a good idea because they knew that we wouldn’t get into much trouble on a golf course,” Rank recalled.

During the winters, his focus shifted from the links to the hockey rinks.

“I grew up playing a lot of hockey in the winters and had dreams of playing in the NHL. I was a forward and played centre and played some junior hockey and also played college hockey at the University of Waterloo,” he pointed out.

“As I grew older, I realized a professional career as a hockey player was not going to happen. So being a referee was neat way to stay involved in the game; and lucky enough for me, I had the opportunity to start right away as a referee in junior hockey,” he added.

“I spent four years in the OHL and they saw some potential in me; and before I knew it, I was refereeing professional hockey games.”

“It was a game between Minnesota and Buffalo and my first call was overturned after video review… I had to make the announcement to the arena saying that there was a goal being awarded to Minnesota and so the fans in Buffalo didn’t like that too much,” Rank pointed out.

“My boss called me the next day and said ‘look at it this way, you can only go up from here,’” he recalled with a laugh.

Things have certainly trended upwards for Rank who went from refereeing seven NHL games that first season to 40 games the following season.  And just last year, he was promoted to full-time status and officiated over 70 NHL games.

Having recently completed his first full season as an NHL referee, Rank has shifted his focus to his summer sport of choice – golf.

Having recently competed in his third consecutive RBC Canadian Open, the three-time defending Canadian Men’s Mid-Amateur Champion is quick to offer his thoughts on the hockey rink design on the seventh hole.

“The fact that they have a rink this year is really neat. It ties in with Canada really well because hockey is huge in our country. It allows the players to have a little bit of fun and joke around with the fans,” said Rank, who made the 36-hole cut last year.

Glen Abbey Golf Club superintendent, Andrew Gyba, is quick to acknowledge the favourable feedback in regards to the hockey rink on the seventh hole.

“I think it’s a great idea, especially seeing how much fun the players are having with it through the practice rounds and through the Pro-Ams…Yeah, I’m all for the rink. Let’s keep it going,” said Gyba.

While he didn’t bring his ‘A’ game to the RBC Canadian Open this year, Rank – who shot a combined two-round total of 11 over par at Glen Abbey – is hoping to step up his game for what promises to be an exciting summer ahead.

First, he will be aiming to put in a strong performance at the upcoming U.S. Amateur, which runs from Aug. 14-20 at the Riviera Country Club in Los Angeles, Calif.

“I played the U.S. Amateur the last few years and feel that I have a bit of unfinished business there,” said Rank who has yet to advance past the round of 32 at the tournament. “The winner gets to play at the Masters, so I’m definitely looking to have a great week.”

The week after, Rank will be looking to defend his Canadian Men’s Mid-Amateur title for a fourth consecutive year at the Wascana Country Club in Regina, Sask.

“With the Canadian Mid-Am, it’s cool that the winner gets to play at the RBC Canadian Open each year – so that’s the goal to win that and get back here next summer,” he said.

Looking at the bigger picture, the 29-year-old feels that he is truly living the dream in that he remains so closely connected to his two childhood passions.

“Obviously there’s been a lot of hard work and dedication to get to this point, but I feel really fortunate to be where I am today. I’m really living the dream,” said Rank.

“I mean, I’ve got one of the coolest jobs in the world as a hockey official; and it’s just neat that it enables me to spend my summers pursing my other childhood passion at such a high level.”