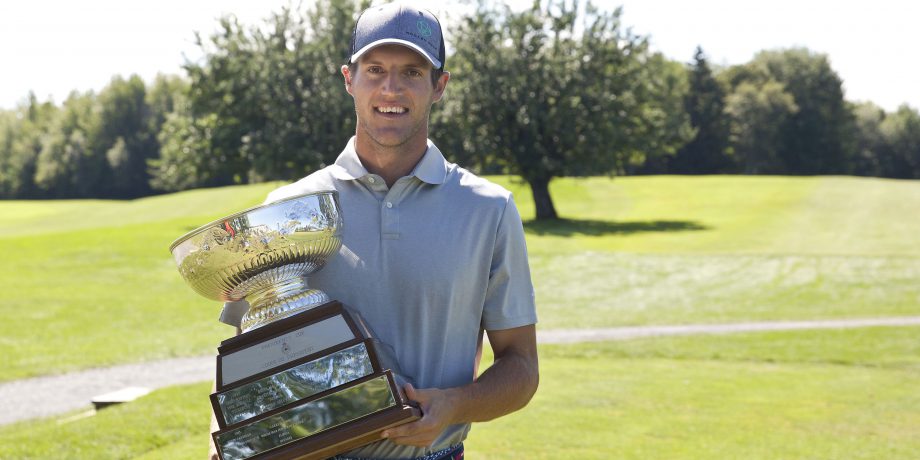 NEW GLASGOW, N.S. – Garrett Rank successfully defended his Canadian Men’s Mid-Amateur title at the 2015 edition of the national championship. Hosted by Abercrombie Country Club in New Glasgow, N.S., Rank led wire-to-wire and completed his title defence with a final-round of 1-under 69 to finish 3-under 277 in the competition.

“This means a lot to me. I worked really hard on my game this summer,” reflected the champion. “To win another national championship feels really good. I played solid again today and gave myself a lot of chances. I was just really steady.”

The native of Elmira, Ont., opened with an even-par 36 across the front nine and totaled four birdies on the day. With the victory, Rank has captured his second consecutive President’s Cup as Canadian Mid-Amateur champion, following a thrilling 2014 playoff victory. He joins a list of five past champions who have claimed more than one title at this event.

“This championship allows you to meet the different guys and hear their stories,” said Rank. “Playing with Dave (Bunker) again was nice. There are guys here like Graham Cooke who has won this tournament seven times. It’s great to play against those guys and then also learn what they do and where they come from.”

The 27-year-old has earned his way into the field for the 2016 RBC Canadian Open at Glen Abbey Golf Club in Oakville, Ont. It will be his second foray into Canada’s National Open Championship after playing in the 2015 edition by way of last year’s victory in this tournament. The 107th playing of the RBC Canadian Open is slated to take place July 18-24, 2016.

“I’m excited to get back to the RBC Canadian Open,” added the former University of Waterloo Warrior. “Playing this year was a great experience. I’ll be able to play a little more settled next year. I won’t have as many nerves. I know if I play my game and if I play the way that I can play, I can compete out there.”

Finishing in second place was Dave Bunker. The native of Woodbridge, Ont., collected back-to-back birdies on holes 3 and 4 before finishing the day at 2-over 72. Michel Landry of Saint John, N.B., carded three birdies across the back nine to complete the competition in third place at 7-over 287.

With his four-day total of 4-over 284, Bunker captured the over-40 Mid-Master division of the championship. “I had a really good start. I felt really good,” said Bunker, who notched two birdies across his first four holes. “I ran into some trouble on holes 11 and 12. That kind of put me out of the chance to catch Garrett. In the end, a 72 is not a bad round in the wind and in the conditions we played through today.”

This is the seventh Mid-Master title for the 50-year-old. “I feel great about that. It means that I’m playing well because there are so many really good players over 40. To be able to finish second overall is really good. Garrett is a great person, first of all. He’s also a really good player. This is really good for him. He deserves everything he’s getting with the chance to play in the RBC Canadian Open again.”

Played concurrently with the first 36 holes of the competition, Team Ontario emerged victorious in the inter-provincial team championship to claim the R. Bruce Forbes Trophy. Garrett Rank and teammates Kevin Fawcett of Toronto and Josh Hunke from New Hamburg, Ont., totaled 5-over 285. Playing in their home province, the members of Team Nova Scotia took runners-up honours with an 8-over 288 score while Team New Brunswick captured third-place at 12-over 292.