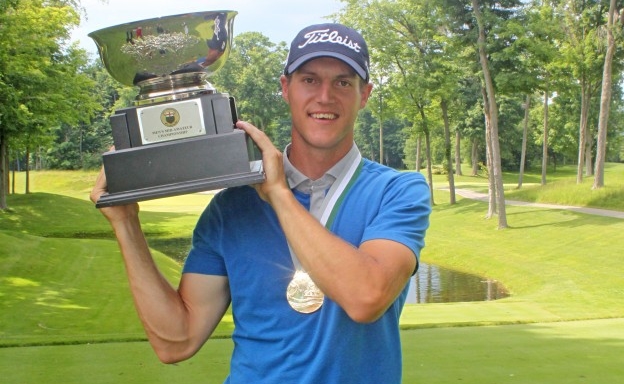 KITCHENER, Ont. — Elmira, Ont.’s Garrett Rank held a two-shot lead heading into the final round of the Golf Association of Ontario’s (GAO) Investors Group Men’s Mid-Amateur Championship at Westmount Golf & Country Club in Kitchener. By the end of the day, Rank remained at the top of the leaderboard and claimed his first Ontario Men’s Mid Amateur title.

The 27-year-old former Team Canada member finished the final round 3-under (70) to bring his tournament total to seven-under (74-68-70-212). Despite finding trouble during the round, Rank was able to hit recovery after recovery to win. Last year, Rank won the Canadian Mid-Amateur but said following it up with the provincial title was still a great feeling.

“It feels good! Any time you can win a tournament and put yourself in a winning position it feels really good,” said Rank.

Rank went on to talk about how the weather earlier in the week didn’t affect his overall tournament.

“I almost blew away on Tuesday, it was that windy! I just knew that everyone had to play in it and I just played my way through it. I knew if I could keep my score around par I would be near the lead. In the second and third rounds I made some key putts. I didn’t make everything but I was really solid. I took advantage of my good iron shots and made birdies and some good par saves.”

Despite some tough shots during his final round, Rank was able to recover well, something that he said helped him win.

“There were a few times today where there could have been some big swings but I managed to save a couple bogeys. I just tried to keep the momentum moving in the right direction and eventually made some late birdies.”

For Rank, he will now turn his attention to representing Canada at the PanAm Games, July 16-19 at Angus Glen Golf Club in Markham, and the RBC Canadian Open, July 23-26 at Glen Abbey Golf Club in Oakville.

Earning the silver medal was Toronto’s Kevin Fawcett. The Toronto Golf Club member shot an even-par final round (73) to finish the tournament at two-under (71-73-73-217).

Picking up the bronze medal was New Hamburg’s Josh Hunke. Hunke, from Deer Ridge Golf Club, also ended the day at even par bringing his three-day total to one-under (72-73-73-218).

Rank, Fawcett and Hunke were all named as the members of Team Ontario for the inter-provincial competition at the Canadian Men’s Mid-Amateur, Aug. 25-28 in New Glasgow, Nova Scotia.

Capturing the Mid-Masters (40+) trophy was Woodstock’s Drew Symons. Symons, the 2012 Mid-Amateur Champion and Craigowan Golf & Country Club member, ended the day one-under (72) and finished in a tie for fourth overall at even for the tournament (73-74-72-219).

For full tournament information and the final leaderboard click here.

The top 41 finishers in the event earned entry into the Canadian Men’s Mid-Amateur Championship.