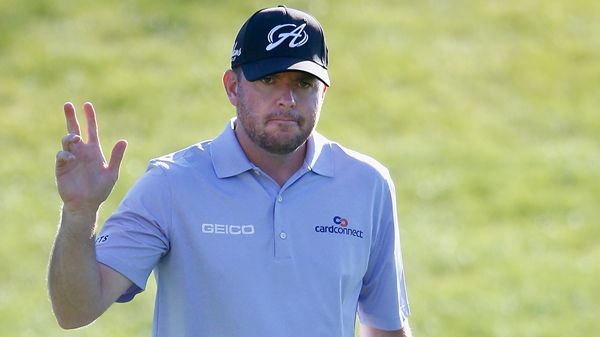 PALM HARBOR, Fla. – Robert Garrigus can’t recall a better performance going into the weekend. And his golf has been pretty good, too.

Garrigus spent most of the practice days fishing in the lakes of Innisbrook, catching nearly three dozen bass. As for his day job, he bagged 10 birdies over two days and delivered the best score of the tournament, a 5-under 66 on Friday, to build a three-shot lead in the Valspar Championship.

His only other PGA Tour victory was a little more than an hour away at Disney, and Garrigus offered a simple explanation.

Garrigus didn’t play a single practice round the year he won Disney. He arrived at Innisbrook on Monday and fished that evening, most of Tuesday and then for about five hours Wednesday without ever looking at the Copperhead course.

“I think that puts me in a good frame of mind because I’m clear and not thinking about anything, just going out and having some fun,” he said.

His golf has been plenty fun.

Garrigus, one of the longest hitters in golf, has made birdie on all of the par 5s both rounds. That has contributed mightily to being at 7-under 135, three shots clear of Kevin Na going into a weekend with a Masters spot potentially up for grabs.

Only five of the top 22 on the leaderboard already are eligible for the Masters.

The three-shot lead is the largest through 36 holes in the 14-year history of this tournament.

Garrigus is about the only player who has made it look easy, even though he felt as stressed as anyone on the Copperhead course, regarded by many as perhaps the best tournament course in Florida.

Even though the weather was close to perfect _ only a breeze in warm sunshine _ only 17 players broke 70.

John Daly was not among them. He was struggling with what he called the yips with his putter when he got to the 16th hole. Daly put three shots in the water, shanked a 7-iron, duffed a chip into the bunker and made a 12. With a double bogey on the last hole, he shot a 90, the highest score of his PGA Tour career.

Graham DeLaet of Weyburn, Sask., shot a 68 to improve on his first-round score of 75 to jump into a tie for 35th at 1 over. Mike Weir of Brights Grove, Ont., did not make the cut.

For all his birdies, Garrigus was especially satisfied with one par.

He pulled his tee shot well left on the 16th hole, the most dangerous tee shot at Innisbrook. The ball went deep into the pines, and Garrigus decided to take on a tiny gap in the trees with a 5-iron.

“I probably hit one of the top-five shots of my life there on 16 out of the trees,” he said. “Hit a low, cut 5-iron, then rose it up over the pine tree and cut it 40 yards and hit to 10 feet. That’s just one of those shots that when you’re playing good and everything is rolling, you kind of expect it. It was a lot of fun to try it, and to pull it off was even better. I’ve spent half my life in the trees. I’ve had a lot of practice.”

He missed the putt, but was more than happy with par.

As for the rest of the golf course, he picked up another birdie on the par-3 15th with a long putt, and one on the par-4 ninth with a 20-foot birdie down the hill.

Rose feels as if his shoulder injury is in the past, except for answering questions about it. He loves the Florida swing because the courses demand so many different shots, and Innisbrook might require the most.

The U.S. Open champion was struggling in the first round until he finished birdie-birdie to salvage a 71. He carried that momentum into the second round, and despite a bogey on No. 6 from being out of position off the tee, and a soft bogey on the par-3 eighth, he felt much better ending with a birdie.

Perez was the first player to reach 5 under for the tournament until he missed two drives well to the left. One was in the trees at No. 6, the other went out of bounds on No. 7. Both led to double bogeys, though Perez didn’t get down on himself.

“Just move on and keep going,” he said.