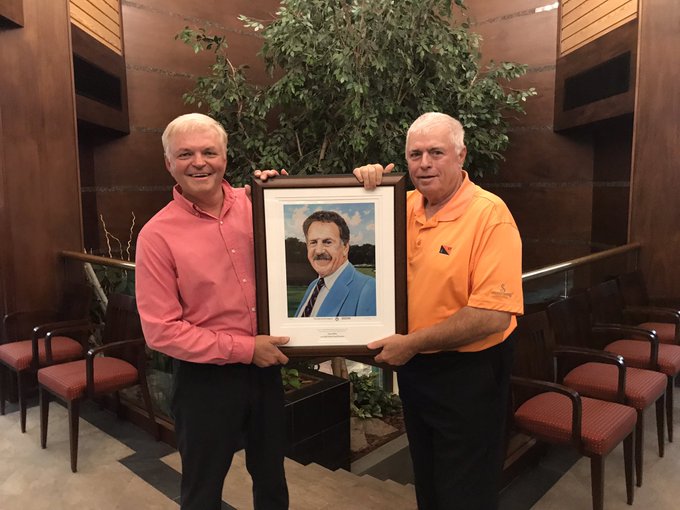 CALEDON, ONT. – The Golf Journalists Association of Canada (GJAC) have announced Garry McKay as recipient of its Dick Grimm Award for 2021.

The announcement was made Monday, October 4th as part of GJAC’s Annual General Meeting and Golf Day, which was held at The Pulpit Club in Caledon, Ont.

A committee of past GJAC presidents selected McKay, a Hamilton native, in recognition of his contributions to the Canadian golf-media landscape during a remarkable career spanning four decades.

“Garry personifies the Dick Grimm Award with the contribution he’s made to Canadian golf for more than 40 years,” said GJAC president, Rick Young. “His career as a journalist, one that still continues today, is steeped in professionalism and his dedication to volunteering is a model for leaving the game better than you found it. Dick would be thrilled knowing Garry has joined the GJAC’s elite list of Dick Grimm Award recipients.”

“I was quite surprised and deeply honoured to be named this year’s Dick Grimm Award winner by the Golf Journalists Association of Canada,” said McKay. “I have always said that you meet the nicest people in golf, either playing it, covering it or volunteering in it. Any success I’ve had is because of the people I’ve met along the journey.”

Decorated for his journalistic efforts, Mckay began his career in radio before transitioning to write for SCOREGolf, Golf Canada, Pro Shop Magazine, Ontario Golf, the Hamilton Spectator and various publications in the United States and Germany.

A multi-sport journalist, he would also receive the James H. Ellery Memorial Award from the American Hockey League, three media awards for provincial gymnastics, a SCOREGolf award in 1981 and was honoured by the Ontario Golf Hall of Fame with the Lorne Rubenstien Award in 2015.

Additionally, he has also contributed to Golf Canada’s Heritage Committee, acted as director of the Stanley Thompson Society and became one of the founding directors of the Hamilton Halton Junior Golf Tour, where he’s continued his involvement since 1984 and has elected to make the donation the award comes with out to.

Garry Mckay continues to be a pillar of the Golf Journalists association where he is one of the seven founding directors. He has served the organization in previous capacities as president, secretary/treasurer and long-time board member. He currently holds office as advisor to the board while continuing his 43-year career as a sports journalist.