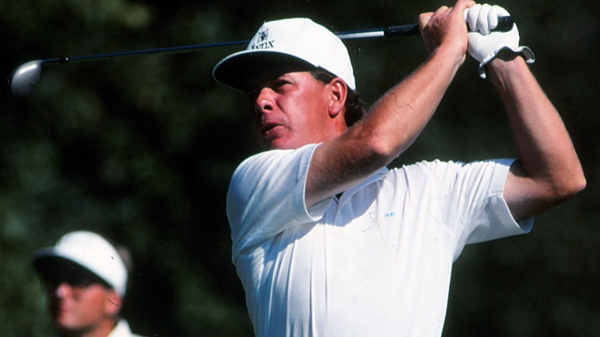 It was an accomplishment that probably should be heralded as one of the greatest in the history of Canadian golf. Instead it is barely remembered.

It was 30 years ago, September 2 to be exact, that Jerry Anderson a Montreal native and Cambridge, Ont. resident became the first, and some would argue the only Canadian to win an event on the European Tour.

And he did it in spectacular style. Against a field that included Americans Payne Stewart and Hubert Green and every top player in Europe except Seve Ballesteros, Anderson won the 1984 Ebel European Masters Swiss Open the second biggest event on the European Tour behind only The Open Championship.

He fired rounds of 63-66-66-66 on the Golf-Club Crans-sur-Sierre at Crans-Montana in Valais Switzerland, where the event is still held, to beat Howard Clark by five strokes.

His 27-under-par was a European Tour record that stood for 19 years until Ernie Els finally beat it.

“Personally, that was one of my most remarkable achievements, not only winning the event but against the best Europe had to offer with the exception of Seve,” says Anderson who turns 59 later this month.

“I played with Hubie Green and Sandy Lyle on Saturday and with Jose Maria Canizares on Sunday in the last group.”

Anderson had a remarkable career that included multiple wins on the Canadian Tour (the forerunner to PGA Tour Canada). He captured the Quebec and Saskatchewan Opens twice, the Ontario Open, the Manitoba Open, the Canadian Professional Golfers Association Championship (now PGA of Canada Championship), the Windsor Charity Classic and the Canadian Tour Championship. He won on the Hogan Tour (now The Web.Com Tour) and came close to winning in Asia and Africa.

“The players I looked up to were guys like Graham Marsh and Gary Player, the international players that were able to take their game throughout Europe and Australia and Asia,” said Anderson. “That concept of golfer appealed to me more than the one-tour type.

“And I’m a little surprised that the emphasis for young golfers is still so pointed toward the U.S. I had a chance to see the planet and play golf everywhere and enjoy the experience of what the planet has to offer. There’s opportunities out there.”

For much of the 1980s Anderson played in Europe.

Obviously his win in the European Masters was the highlight of his career but for a four-week period in August and early September 1984 Anderson may well have been the hottest golfer on the planet.

“Four weeks before the win I had finished ninth in the Irish Open at Royal Dublin despite a double bogey on the last hole,” said Anderson. “I think the double bogey left me eight strokes behind Bernard Langer.

“The following week in York, England (Benson & Hedges International Open) I birdied the last hole to finish sixth. At that point I was something like 27-under for those two events.”

Those two tournaments set the stage for the (Lufthansa) German Open in Frankfurt.

“I played with Bernard Langer in the third last group and shot 63 on the Sunday,” says Anderson. “I was with Renton Laidlaw and some of the other European Tour reporters and they were getting ready to crack open a bottle of champagne for my first win when Wayne Grady finished birdie-birdie-eagle-par to beat me by one.

“I ended up shooting 17-under at that event and finished second.”

After closing with a 63 in Germany, Anderson opened with a 63 the following week in Switzerland and he thinks that might still be a European Tour record.

This time he would get to uncork the bubbly. Tied with Clark after the first round he led by three after two and four after three.

“I putted the lights out during that streak,” Anderson recalls. “I holed out a couple of times from the fairway and my driving was so good that I was just never in any trouble.”

Until that magic month Anderson said the season had not been going well.

“Whatever I earned in Ireland double the money I had won to that point,” he said. “I basically kept doubling my money every week over a four-week time frame.”

For winning in Switzerland he took home $25,000 pounds which at the time converted to about $48,000 Canadian dollars.

Anderson had success on virtually every tour but the PGA Tour. He played two seasons on golf’s biggest stage, 1990 and 1992 but couldn’t recreate the success he’d had on other circuits.

“It wasn’t for lack of trying,” he says.

The end of Anderson’s competitive career came in the fall of 1994.

Seeing the world and playing golf in remote locations that he had loved so much early in his career suddenly became a grind. His wife Barbara, who had travelled with him during his European Tour days, was home in Cambridge with their young children Chrysse and Luke.

“I had been in South America for 25 days,” he recalls. “I shot 77 in the first round of the Ecuador Open. I went to the tournament organizers and withdrew and caught the next flight home.”

He’s played hardly any competitive golf since, other than the odd one-day pro-am.

Anderson’s time these days is taken up at Credit Valley Golf and Country Club where’s been the teaching professional for the last three years.

Anderson says he’s always believed he didn’t get as much recognition here in Canada for his win in Switzerland because the European Tour itself didn’t get much publicity on this side of the pond back then.

“Don’t forget that was before Europe started dominating the Ryder Cup,” he says.

“But I still get a kick out of watching a European Tour event on the Golf Channel and hearing the commentators mention my name and the record and wondering what I’m doing these days.”