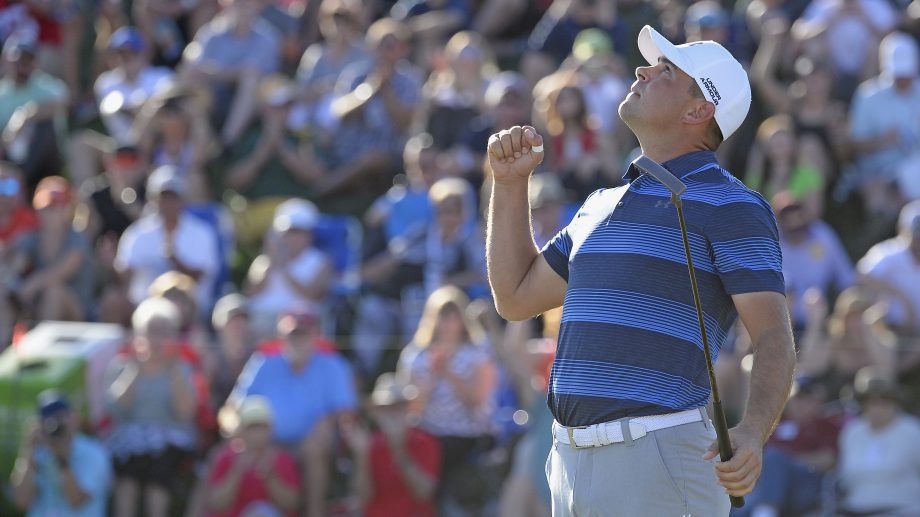 “My wife kind of surprised me with him,” Woodland said. “I didn’t think he was going to be there. I thought it would just be her. For her to bring him out, that was special and something I’ll never forget.”

Jaxson was born prematurely in June after a twin girl was lost in a miscarriage. On Sunday at TPC Scottsdale, he was in his father’s arms at the trophy celebration after a playoff victory.

“For him to be here, it’s obviously a miracle,” Woodland said. “I’m just so excited to share this with him and my family. Hopefully, it’s the start of something special.”

Woodland beat Chez Reavie with a par on the first extra hole.

Playing three groups ahead of Reavie, Woodland birdied three of the last four holes for a 7-under 64 – the best round of the day – to finish at 18-under 266. He opened with rounds of 67, 68 and 67 after getting some advice from instructor Butch Harmon.

Reavie, who got his lone victory at the 2008 RBC Canadian Open, made a 20-foot birdie putt on the par-4 18th to force the PGA Tour’s fourth straight playoff and the event’s third overtime finish in a row.

“It’s right up there with the putt I made to win in Canada,” the 36-year-old former Arizona State player said. “It was a lot of fun. Fortunately, I walked up and I really got a good read off it right away.”

In the playoff on 18, Woodland hit short of the green from the left fairway bunker and chipped to 2 feet to set up his third PGA Tour victory and first since 2013.

“It’s been coming. We knew it the last month,” Woodland said. “And sure enough today it all clicked and I made some putts early, gave me some confidence and really hit the ball well coming down the stretch.”

Reavie missed the green left in the playoff and couldn’t get an 11-footer to fall.

“I carried the sign board here growing up when I was in high school and junior high and to have a chance to win the tournament this week was a lot of fun,” Reavie said.

“They were great,” Reavie said. “Being a hometown guy, everyone’s rooting me on.”

“I was in the zone,” Woodland said. “I really had it going.”

Woodland also won in 2011 at Innisbrook and in 2013 in Nevada. He played college basketball at Washburn in Topeka, Kansas, as a freshman before transferring to Kansas to play golf.

Phil Mickelson had the fans roaring with three straight birdies, the second a 30-footer on 16. But, needing an eagle on 18 to tie Woodland, he drove left into the church pew bunker that Woodland hit into in the playoff and made double bogey. The 47-year-old Hall of Famer tied for fifth at 14 under after a 69.

“I just didn’t get it going early,” Mickelson said. “It was fun to be in contention. I had a great time coming down the stretch. I didn’t like, obviously, the last hole. … I hate finishing like that.”

Third-round leader Rickie Fowler (73) and second-ranked Jon Rahm (72) were six strokes back at 12 under. They played in the final group with Reavie.

“Just couldn’t buy a putt,” Fowler said. “That’s one of the best clubs in my bag. I felt like I hit a lot of good putts, so it was a little disappointing to not see really anything go in on the back nine.”