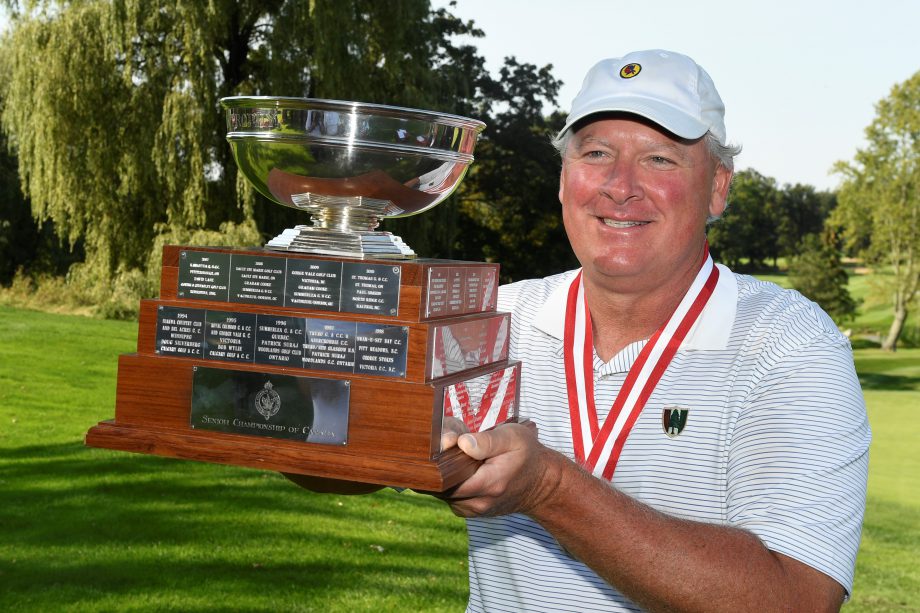 KAHNAWAKE, Que. – American Gene Elliott carded an even-par 70 during the final round to claim the 2017 Canadian Men’s Senior Championship at Kanawaki Golf Club and hoist the John Rankin Memorial Trophy.

The native of West Des Moines, IA, finished at 3-over (283) for the championship, which was good enough for a 2-shot win over third-round leader Doug Hanzel of Savannah, GA.

“I am so thrilled – this is tough competition,” said Elliott, who recently competed in the U.S. Senior Amateur Championship where he fell in the round of 32. “Senior golf is tough; these guys are good. You win very little in golf at all and when you do it’s very special. To win in Canada, I couldn’t be more thrilled.”

Elliott may be new to the senior circuit having just turned 55 in February, but he’s enjoyed a stellar competitive golf career throughout the years. Among his many accomplishments, he’s amassed more than 20 titles in his home state of Iowa and also won the prestigious Porter Cup in 1998.

The veteran had high praises for the host club of Kanawaki.

“I hit the ball well today. I hit a lot of greens this week. I didn’t have many 3-putts,” he added. “But this Kanawaki, it’s a tough little bugger. It looks like you can get after it, but it gets after you. It’s a wonderful place to host a championship.”

With the win, Eliott earns an exemption into the 2018 U.S. Senior Amateur Championship at Eugene Country Club in Eugene, Ore., from August 25th to 30th.

He’s also committed to returning to Canada to defend his title at next year’s Canadian Men’s Senior Championship, which will take place September 4-7 at Gowan Brae Golf & Country Club in Bathurst, N.B.

“I can’t wait to get to New Brunswick,” he laughed. “I have no idea where it is or how to get there, but I’ll be there.”

Hanzel, who finished runner-up, never could get things on the right track during Thursday. His 5-over round of 75 included four bogeys, a double bogey and just a single birdie.

A trio of Americans tied for third. Allen Barber of Yorktown, VA, Paul Simson of Raleigh, NC and Jack Hall of Savannah, GA, all finished at 7-over (287).

Doug Roxburgh, an honored member of the Canadian Golf Hall of Fame, was the top Canadian finisher. The Vancouver native finished tied for 6th at 8-over (288). Roxburgh won the Canadian Junior Boy’s Championship in 1970 and Canadian Amateur titles in 1972, 1974, 1982 and 1988. He also claimed the Canadian Men’s Senior Championship in 2014.

Additional information, including complete scoring info for the 2017 Canadian Men’s Senior Championship can be found here.