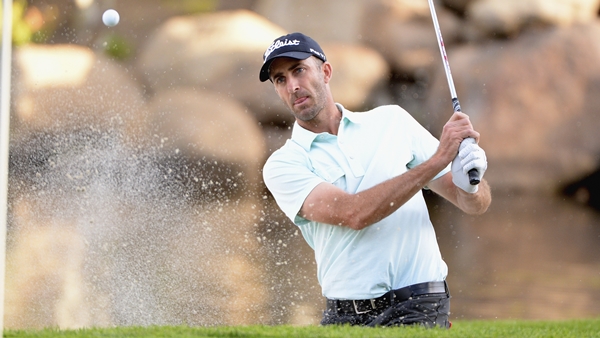 RENO, Nev. – Geoff Ogilvy got up-and-down for birdie from a greenside bunker on the par-5 closing hole to take a three-stroke lead Saturday in the Barracuda Championship.

In the modified Stableford event, players receive eight points for double eagle, five for eagle, two for birdie, zero for par, minus-one for bogey and minus-three for double bogey or worse.

Ogilvy, the Australian who won the 2006 U.S. Open, had seven birdies and two bogeys in a 12-point round in hot, windy conditions at Montreux to push his total to 35.

“I played quite well,” Ogilvy said. “Birdied the par 5s I needed to birdie, which is ante in this format, because birdies are so much better than bogeys are bad. So it’s definitely a format that rewards the guy that makes a lot of birdies. … So I put some points on the board, which you have to, because there were some low ones this morning, it looked like, or some high ones, however you want to put it.”

He’s making his first appearance in the event since 2002 after failing to qualify for the World Golf Championship-Bridgestone Invitational.

“Someone can have 20 points,” Ogilvy said. “So that means I still have to score a bunch of points just to stay in front of the guys who are close. So I just go out and play as well as I can. Hopefully, it goes well.”

Nick Watney, the leader after each of the first two rounds, was tied for second with Jason Allred. Watney scored six points, and Allred had 14.

“A little bit disappointed, to be honest,” Watney said. “Missed my share of putts. But I’ve got a chance tomorrow. So I would have taken that at the beginning of the week.”

He had four birdies and two bogeys.

“It was tricky and the greens were getting a little baked out,” Watney said. “So, probably the most difficult that I’ve seen it this week so far. But at the same time Geoff played really well and there were some out there.”

Brandon Steele was fourth with 30 points after a 10-point round.

Mallinger, playing on a sponsor exemption, had a hole-in-one on No. 11 in a 19-point day – the most in the history of the event.

“I just started off a little bit slow,” Mallinger said. “Only had a couple of birdies on the front and then made the turn and made a 1, kind of kick-started my day.”

Janzen scored 13 points, and Lingmerth had 12.

Ogilvy won the last of his seven PGA Tour titles in 2010. He has only two top-25 finishes this season and is 151st in the FedEx Cup standings, with the top 125 getting into the first playoff event.

“I don’t really think about it, to be honest with you,” Ogilvy said about the FedEx Cup. “I thought I was thinking about it a bit earlier in the year because I was struggling. I was way back on the list. Thinking about it doesn’t really help you play very well, usually. I’m glad I’ve got a chance.”

Watney is making his first appearance in the event since 2008. He’s 124th in the FedEx Cup race as players fight for spots in The Barclays, the playoff opener he won in 2012 for the last of his five PGA Tour titles.

“I’m hitting the ball great,” Watney said. “If I can putt, I got a real chance.”

Because of expected afternoon thunderstorms Sunday, the tee times have been pushed up and the players will start on both Nos. 1 and 10 in threesomes.