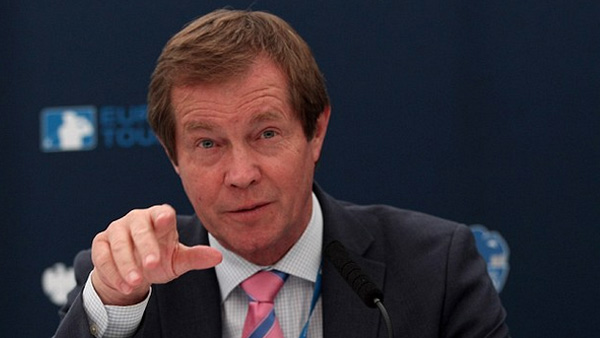 SHANGHAI — European Tour chief executive George O’Grady is stepping down after 10 years, saying it was a good time to leave after another overwhelming Ryder Cup success and enough “green shoots of recovery” across the tour.

O’Grady asked the board to start looking for a successor, the tour said Wednesday in a statement.

It was not clear when he would officially step down. O’Grady has agreed to stay on until the European Tour board finds a replacement, and then sufficient time for his successor to make a smooth transition.

O’Grady, who has been with the tour in some capacity for more than 40 years, will become president of international relations, in which he will represent the European Tour when golf returns to the Olympics in 2016.

“The European Tour and its players are admired throughout the world of golf, and George has played a key part in building global relationships and developing the tour,” said David Williams, chairman of the tour.

O’Grady became only the third chief executive of the tour in January 2005, following 30 years of Ken Schofield and John Jacobs, who oversaw the tour’s formative years from 1971-74.

“In the aftermath of what I believe to have been the best presented Ryder Cup since my first involvement in the contest at Royal Lytham in 1977, I felt this was the right time to ask the board to begin the search for my successor,” O’Grady said.

“It is my firm belief that, coming toward the end of what has been another incredibly successful season, we are now seeing the green shoots of recovery across Europe, and I am pleased that this coincides with all our building blocks, in terms of key television and sponsorship contracts, being in place.”

It has not always been smooth sailing.

A year after O’Grady was on the job, PGA Tour commissioner Tim Finchem announced The Players Championship would move from March to May, right about the time European events returned to the continent. The U.S. tour also launched the FedEx Cup, a $35 million bonus pool in August and September which became even more attractive to European-born players.

With more players heading for America, the European Tour bumped up the required number of events for its members from 11 to 13 to beef up support.

A critical point was in 2006 at La Costa for the Match Play Championship, where O’Grady assembled two dozen European players in the field for a meeting to allow them to share ideas on keeping the European circuit strong. He said the central message that night was that the “European Tour is worth fighting for.”

A few years later, O’Grady oversaw the new Race to Dubai that provided a year-end bonus to European players.

And with the economy struggling in Europe, the tour adjusted its schedule to become the most global tour in golf. It was the first to tap heavily into the Asia markets – particularly China – and holds events in the Middle East, along with South Africa.

“He’s had a good reign,” Justin Rose said. “There’s no doubt there has been challenges. The European Tour and the economy and the markets in which the European Tour has been going is difficult.”