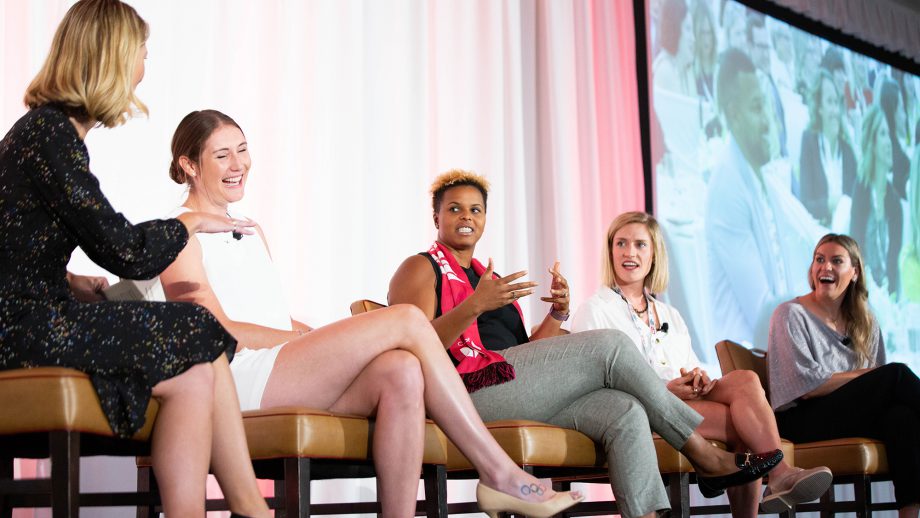 The Summit’s mission is geared towards empowering women in the workplace, providing a platform for networking, and giving back to the community, a task of which title sponsor CP is going above and beyond with this year.

Hosted by Sportsnet Anchor Evanka Osmak, the day has been a mixture of networking and speeches from successful women figures in business and sports, including RBC CAO Jennifer Tory, and Assistant VP of Investor Relations for tournament sponsor Canada Pacific, Maeghan Albiston. On the sports side, Team Canada Olympians Karina Leblanc (soccer), and Natalie Spooner (hockey) both spoke to their journeys, and what has made them successful both in sports and in life.

The afternoon capped off with a keynote address from Roberta Bowman, the Chief Brand and Communications Officer for the LPGA TOUR, and creator of their #DriveOn campaign. The LPGA product is a fantastic one, the fan experience, the player engagement, and the quality of golf and golf courses is second to none, but it is Bowmans’s job to engage that product with fans, and grow that fanbase while at the same time, inspiring young female golfers to play and compete. The overall goal of this “Series of Summits” is to inspire women to succeed in their chosen field; sport, business and beyond.

“84% of people are interested in women’s sports worldwide,” opens Bowman, “but only 5% of corporate global investment in sports worldwide goes to women’s leagues and teams, something doesn’t make sense there.”

The LPGA’s mission is to change this paradigm for the benefit of all women and women sports, and they hold summits like this one at more than half of LPGA event sites to generate that change. “Sports are an incubator for character and leadership,” says Bowman, “96% of women CEO’s played competitive sports. Where better than in sports than to watch women lead?”

This mission inspired Bowman to the task of rebranding the entire LPGA marketing strategy, which she did with an all-female creative team. The #DriveOn campaign that emerged is truly bigger than golf. “It’s for all the drivers out there, drivers of change, progress, opportunities and optimism. At the LPGA we drive on with passion, courage, and we do it in our very own way.”

“The centrepiece of the campaign,” says Bowman, “is our 45-second video I’m sure you’ve all seen by now.” (But here’s the link if you haven’t.

After showing the current video, Bowman also leaked the rough edit of a new DriveOn spot, release date coming soon, featuring Stanford four-time All-American and LPGA TOUR Junior,  Mariah Stackhouse, who joined Bowman on stage to close out the conversation answering questions about her childhood, her start in golf, and her famous NCAA Championship clinching match.“We look to ourselves for inspiration,” says Stackhouse, “as I look around this room and see all of you, I am inspired. We can find inspiration amongst us.”

The LPGA and women’s golf in Canada has found inspiration in CP.  Bowman calls CP’s sponsorship of the tournament “visionary,” and “a value statement for what we are.”

Bringing it home, Bowman concludes with a call to action for all of Canada to answer, “Canadian golf fans are amongst the best fans in the world. To Golf Canada, you have an amazing organization, and to Brooke Henderson, Canada has a sports champion for the ages. Enjoy the CP Women’s Open, go out there this week and see the best in the world competing for your National Championship, and competing for every girl.”