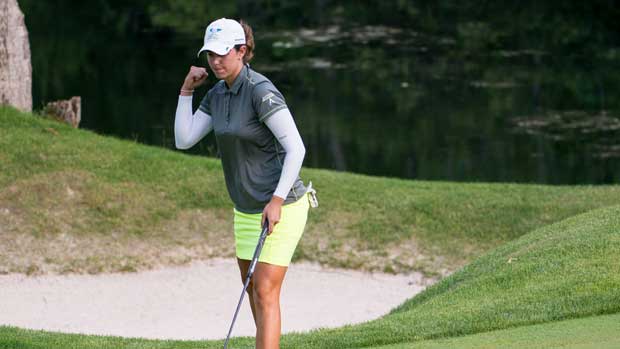 Giulia Molinara during the second round of the Tullymore Classic. (Andrew Knapik/ Symetra Tour)

CANADIAN LAKES, Mich. – Giulia Molinaro (Treviso, Italy) and Chie Arimura (Kumamoto, Japan) will share the lead at 11-under par heading into the final round of the Tullymore Classic.

“I played very well,” Molinaro said. “The back nine especially I started really hitting at pins and really getting it close and making some good putts, especially on the last hole I made a really long one. Generally the game this week has been very good especially today on the back nine.”

Molinaro, the Volvik Race for the Card No. 1, made the turn in two under and then had a colorful back nine with six birdies and two bogeys to post a 6-under, 66. Ariamura was able to bounce back from three bogeys in her first six holes to shoot a 68.

“I had a very tough start but I made seven birdies after that so I’m very statisfied with it,” Arimura said of her round today.

The duo will be joined in the final group tomorrow by Haruka Morita-WanyaoLu (Takamatsu, Japan) who captured the Symetra Classic earlier this season. Carleigh Silvers (Greeley, Colo.), Daniela Iacobelli (Melbourne, Fla.) and Sara-Maude Juneau (Quebec, Canada) will make up the penultimate pariing.

“I’d like to say that you learn how to be on the lead and try to play to win but I don’t think that I’m yet to the point to say that I’m relaxed or I’m comfortable,” Molinaro explained. “Obviously, I’ll go out there and try to do my best, and everyone else is in the same position as me so everyone has to go and try to play their best golf, but it’s never an easy situation and whoever is the strongest mentally tomorrow will make it.”

“I’m not nervous,” Molinaro continued. “Those are the nerves that every golfer or athlete wants to have because that means that you are right up there so it’s good. I’m welcoming the nerves. I’m welcoming the stress, whatever you can call it. I’m excited. I’m obviously happy to give myself a chance and if I play the way I play today I probably have a pretty good chance to win the tournament so it’s just go shot-by-shot and try to stay mentally strong and never be happy with the score that you’re at. Always try to do better.”

Final round play will begin off the first at 7:30 a.m. on Sunday.

14-year old caddie helping Sara-Maude Juneau: When Canadian Sara-Maude Juneau went to meet her caddie prior to Friday’s first round she didn’t know what to expect as she had signed up through the volunteer caddie system. Who she was paired with was 14-year-old Pierce.

“He’s been great honestly,” Juneau said. “He’s really fun. He’s really chill. He reminds me of my little brother a bit back when he was that age.”

The duo have made quite the team this week as Juneau currently sits in a tie for sixth at 9-under par, two strokes back of the leaders.

“It’s great,” Juneau said. “He’s done exactly what I’ve asked him to do and he’s really enjoying himself and is very positive. It’s impressive because I’ve had older caddies who weren’t nearly as good as him.”