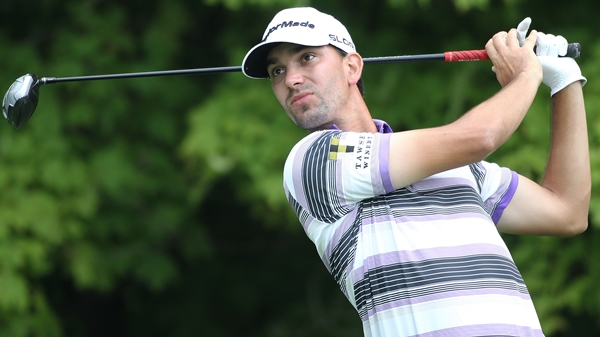 BEON EOIN, NS – Burlington, Ont.’s Michael Gligic and Syracuse, New York’s Daniel McCarthy will take a share of the lead heading into the final round of the 2014 Cape Breton Celtic Classic presented by PC Financial, both reaching 14-under par through 54 holes at The Lakes Golf Club.

Gligic, who owns top five finishes in each of his last two starts on PGA Tour Canada, carded a 6-under 66 on Saturday to match the lowest round of a very windy day in Nova Scotia, while McCarthy birdied three of his last six holes to shoot 69 and join him in a tie at the top.

“I feel good. I’ve just got to keep going and keep the pedal to the metal and try to make some more birdies tomorrow,” said Gligic, who is now 51-under par in his last three Tournaments dating back to the start of The Great Waterway Classic.

“I really was hitting it pretty good all day. I just missed a couple of putts that could have gone in, but that always happens, so I just tried to keep hitting good shots on the way in, which I ended up doing, and made a couple of birdies,” said the 29-year old McCarthy.

Gligic began the day three shots behind McCarthy, but caught up with a 4-under 32 on the front nine. After three more birdies and two bogeys on the back, the 24-year old struck a brilliant approach from the fairway bunker to three feet on the par-5 18th, but missed the short eagle putt and settled for a birdie and 14-under total through three rounds.

McCarthy, who started the day with a one shot advantage over Moscow, Idaho’s Chris Williams, converted a two-putt birdie of his own at the final hole to tie Gligic. The two will play in the final group on Sunday, a pairing McCarthy said would be comfortable for both players.

“I’ve known Mike for a long time,” said McCarthy. He and I were both rookies at the same time when this was the Canadian Tour back in 2009, so we should have a good time. We know each other pretty well.”

For Gligic, the final round presents another opportunity to capitalize on a stretch of great golf. Before his 4th place finish at The Great Waterway Classic and playoff loss at The Wildfire Invitational presented by PC Financial, he ranked 65th on the Order of Merit, but has jumped all the way to 11th with two events to go, currently the top Canadian on the season-long money ranking.

“The last couple of weeks have been great,” said Gligic, who owns one PGA Tour Canada win at the 2012 ATB Financial Classic. “I fell short a couple of times the last two weeks, but tomorrow’s a new day and hopefully I can get the job done. Hopefully I can overcome a few butterflies and just focus on my game and make a few putts.”

McCarthy, whose best finish on PGA Tour Canada is a solo 12th at this year’s Bayview Place Island Savings Open presented by Times Colonist, said the key to success on Sunday would be blocking out the rewards of a potential win and focusing on the round in front of him.

“You just have to try to calm yourself down, because you’re going to be on edge all day long,” McCarthy said. “There is quite a bit on the line, and we all know that, but it’s just golf. You have to try to turn it into a round with your buddies.”

Two shots back of Gligic and McCarthy was Order of Merit No. 4 Matt Harmon, who birdied the 18th for a 12-under total and solo third through three rounds, while West Vancouver, BC native Seann Harlingten carded a 67 to sit solo fourth at 11-under. Williams was one shot further back in fifth at 10-under following a third round 72.

While his fellow members of The Five have struggled this week – Order of Merit leader Joel Dahmen and No. 3 Brock Mackenzie missed the cut, while No. 2 Tim Madigan and No. 5 Josh Persons are T55 and T62, respectively – current No. 4 Matt Harmon has shone so far this week in Cape Breton, sitting in solo third through three rounds.

A strong performance on Sunday could have major implications for The Five.

Harmon, the winner earlier this year at the SIGA Dakota Dunes Open presented by SaskTel, could move as high as No. 2 with a win or No. 3 with a solo second on Sunday, while solidifying his lead over the players below him looking to chase him down in the race for Web.com Tour status.

“That was the best I’ve played all week,” said Harmon after a 3-under 69 in the windy conditions. “I hit the ball right in the middle of the clubface, which is key in the wind.”