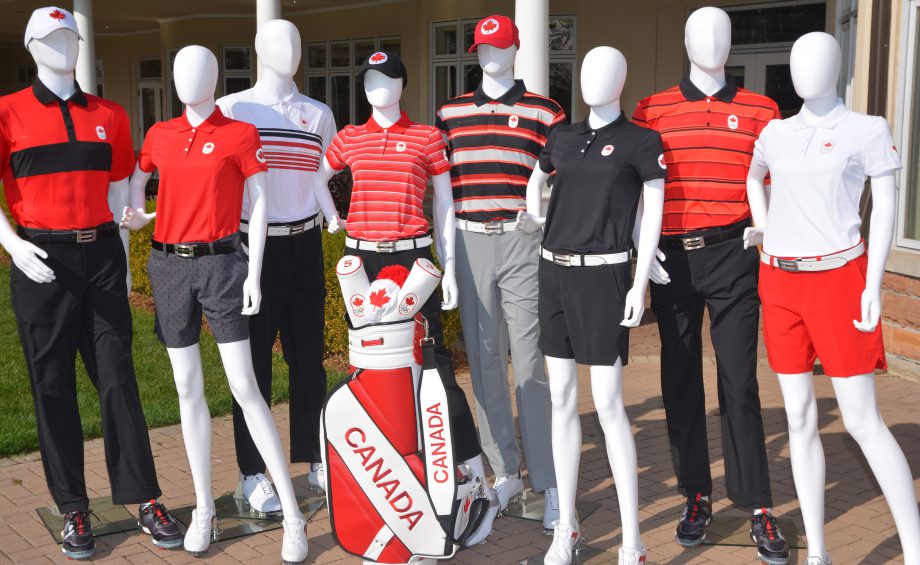 Unmistakably Canadian with an inspiration that balances tradition, style and strength, the scripting will feature the Canadian Olympic Team mark along with the iconic red Maple Leaf that Canadian athletes have proudly donned in international competition.

“We are excited to partner with Hudson’s Bay in outfitting our Team Canada golfers this summer in Rio de Janeiro,” said Scott Simmons, CEO of Golf Canada. “Golf’s return to the Olympic Games represents an exciting time for our sport both domestically in Canada and globally. With less than 100 days until the start of the golf competition, the momentum is building and there will be an incredible sense of pride to see our Team Canada golfers don the maple leaf during the 2016 Olympic Games.”

The release of the clothing that will adorn Canada’s four athletes—two men and two women—in Rio is specifically logoed to comply with regulations set out by the International Olympic Committee and International Golf Federation.

Canada is proud to enter the Olympic Games in Rio de Janeiro as the ‘defending golf champion’ when the sport makes its long-awaited return to the Olympic stage following a 112-year hiatus. Canadian George S. Lyon of Toronto, an honoured member of the Canadian Golf Hall of Fame—made history at the 1904 Olympic Games in St. Louis, Missouri when at the age of 46 he captured Olympic gold—the last time the sport was featured in Olympic competition.

“We are thrilled to be the official outfitter for Golf Canada’s National Team and excited to dress our athletes on the field of play during a competition for the first time”, said Liz Rodbell, President, Hudson’s Bay.  “Hudson’s Bay is dedicated to supporting Canada’s up and coming golfers competing on the international stage and has committed to 10% of sales proceeds from the Golf Canada collection to support the national team program.”

Golf fans looking to cheer on Team Canada can purchase a collection of polos, T’s, jackets, pants, shorts and more at Hudson’s Bay stores across Canada and online at thebay.com. Prices range from $29.99 – $99.99.

A field of 120 golfers—60 men and 60 women—will be selected for the Olympic golf competition based on the World Golf Rankings as of July 11, 2016.