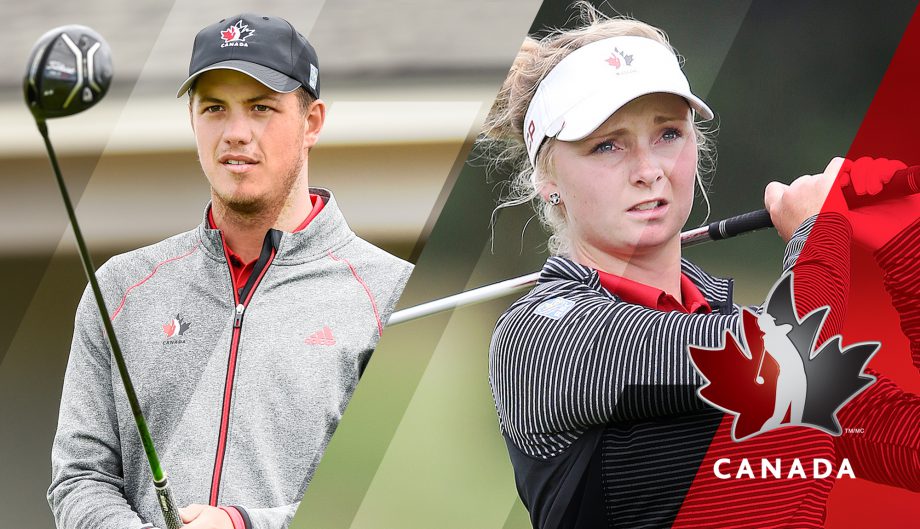 Golf Canada is pleased to announce the 18 athletes who have been chosen to represent Team Canada as part of the 2018 National Amateur Squad and Development Squad.

In all, eight athletes comprise Team Canada’s National Amateur Squad including four players on the men’s team and four on the women’s. The 10-member Development Squad will include five women and five men.

“Based on their outstanding performances this year, we are pleased to announce the young men and women chosen to represent Canada as part of the national team program,” said Jeff Thompson, Golf Canada’s chief sport officer. These talented athletes are a product of a circle of support that includes personal coaches, parents and provincial high-performance programs and will proudly represent Canada on the global golf stage.”

The following athletes have been selected to Team Canada’s 2018 Amateur Squad:

The following athletes have been selected to Team Canada’s 2018 Development Squad:

New in 2018, the National Development Squad program will feature a centralized component, which will be based out of Bear Mountain Resort in Victoria, B.C.—Team Canada’s official training centre since 2015.

The program will send Development Squad athletes to Bear Mountain from February through to early June to be immersed in a focused centre of excellence, surrounded by world-class technical coaching staff and experts in the areas of mental performance, physiotherapy, biomechanics and nutrition.

The change in program structure and commitment to a centralized training environment over four and a half months of the year are designed to better support emerging talents as part of Golf Canada’s next generation strategy.

The number of days that Development Squad athletes will spend in a world-class training environment will increase from approximately 30 (in the current structure) to 120 in the new program.

“We felt that this change was necessary to deliver a significant impact to targeted athletes aged 18 and under in this crucial stage of their development,” said Thompson. “An increased number of contact days with our expert high-performance coaches and sport science staff will provide our next generation athletes with a true world-class training environment.”

In addition to the world-class facilities available at Bear Mountain, athletes will have access to one of the best training centres in the country just 10 minutes away – the Pacific Institute for Sport Excellence.

For accommodation, Development Squad members will be paired with billet families in the region to provide safe, supportive home environments for training and study throughout the program. All potential billet candidates will undergo a screening process with Golf Canada.

Athletes will be enrolled at Belmont Secondary School in Langford, B.C., where they will attend classes in the morning, followed by training in the afternoon. Team members will also be assigned a teacher from West Shore Distributed Learning Centre, where they will take online courses and receive advanced credits for their sports training. Academic commitment will remain a cornerstone of the Team Canada program with Golf Canada coaches and support team working closely with the teaching staff to ensure success in and out of the classroom.

Golf Canada is pleased to announce the 2018 Team Canada coaching staff that will support both the National Amateur and Development Squads.

On the women’s side, Tristan Mullally of Waterdown, Ont returns as Women’s Amateur Squad Head Coach. Matt Wilson, from Newmarket, Ont., will oversee the Women’s Development Squad. Wilson, who also works as Golf Canada’s director of next generation performance, takes over for long-serving Women’s Development Squad coach Ann Carroll who will be taking a new step in her coaching career.

“Derek and Tristan have had tremendous success with Team Canada athletes and the evolution of our national team program will see Robert and Matt play a more significant role through the centralized training environment at Bear Mountain,” added Thompson. “We also want to express our sincere thanks to Ann Carroll on her tremendous contributions to our Women’s Development Squad over the past six years.”

Mullally, Ingram, Ratcliffe and Wilson are all class “A” professionals with the PGA of Canada.

“Not only am I excited to see these young athletes represent Team Canada in 2018, but I’m also thrilled for their PGA of Canada coaches as well,” PGA of Canada President Steve Wood. “The commitment Golf Canada has shown in collaborating with the PGA of Canada in our world class teaching and coaching certification programs is exemplary.”

The 2018 Young Pro Squad team selection is expected in December.