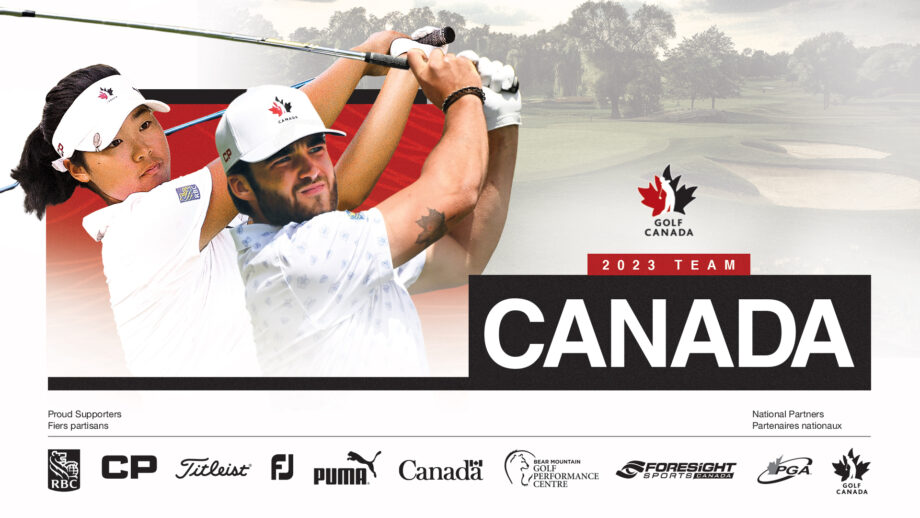 DECEMBER 21, 2022 – Golf Canada is pleased to announce the names of the 57 athletes and eight coaches named to Team Canada as major enhancements to Golf Canada’s national team program continue to take effect.

The updated program tiers for 2023 including a record-breaking number of athletes and coaches reflect the enhancements to the high-performance program announced last year to accelerate Canada’s position in the global professional golf landscape with a goal to increase the number of Canadians on the LPGA and PGA Tours to 30 by 2032.

“Thanks to the Golf Canada Foundation as well as our generous donors and partners, the enhanced Team Canada program structure is well positioned to support more of this country’s top athletes towards our goal of getting 30 Canadians to the major tours over the next decade,” said Golf Canada Chief Sport Officer Kevin Blue. “We have continued to evaluate and analyze the current player development system, have made refinements to competition and training environments, and are working collaboratively with athletes, parents and PGA of Canada coaches toward a shared goal of enhanced Canadian excellence on the global golf stage. Canada has made significant progress in the development of world-class golfers and is poised to take another step forward.”

The enhancements to Golf Canada’s high-performance program, which were outlined in a detailed update authored by Blue in 2022, were made possible through major gift funding support from the Golf Canada Foundation’s network of Trustee donors.

The 2023 Team Canada roster is comprised of 35 players who are competing at the highest levels of amateur golf and refining their games on developmental professional tours. The program provides individualized training and competition support by collaborating with players’ support teams, including personal and college coaches, and adding value where gaps are identified. Members of Team Canada have access to The Legacy Golf Club in Phoenix, Ariz. where players can live and train in the winter months.

The 22-player Team Canada – NextGen roster will include both top junior golfers and U21 amateurs in a program to support their transition from junior competition to high-level amateur golf.

The NextGen coaching staff will be led by Head Coach Robert Ratcliffe with support from Assistant Coaches Jennifer Ha and Jeff MacDonald.  The coaches will be joined by an integrated support team that includes Dr. Emily Wiggin (Strength & Conditioning) and Dr. Adam Kingsbury (Mental Performance & Psychologist).

A key activity within the talent identification system will be the engagement of the National Talent ID Network, a group of more than 80 coaches across Canada working towards collaborative player development initiatives. Additionally, 2023 will see a broader introduction of talent ID camps across the country led by network members to deliver educational and skill-building opportunities to players, parents, and coaches.

The strategic enhancements for Golf Canada’s player development program were shaped by in-depth feedback from numerous stakeholders in Canadian high-performance golf and a global comparative analysis of other countries’ efficiency success in producing world top-200 players. The analysis considered factors such as participation base, culture, and financial investment into high-performance golf, with a particular focus on countries such as Denmark, Sweden, Australia, and England that are geopolitically and culturally similar to Canada.