Golf Canada Board of Director recognized for commitment to athletics 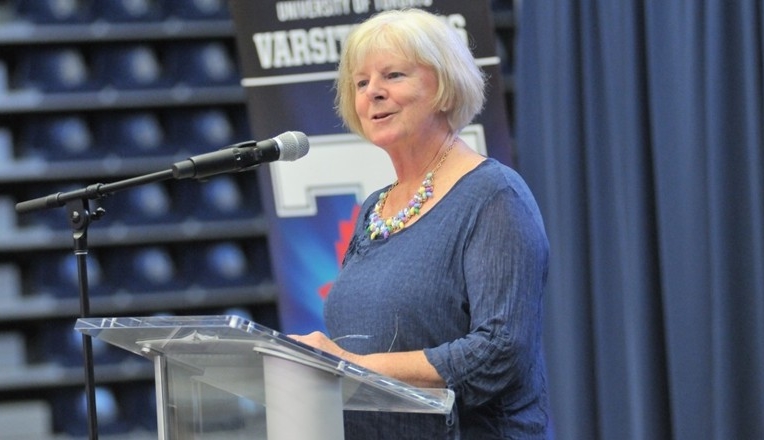 TORONTO – Former University of Toronto Varsity Blues athletic director and current member of Golf Canada’s Board of Directors, Liz Hoffman, received the Thomas R. Loudon award as part of the 2015 U of T Sports Hall of Fame ceremony on Thursday night (May 28) at the new Goldring Centre for High Performance Sport.

Hoffman has been a driving force behind the growth of intercollegiate competition in Canada. She has paved the way in many areas of university sport – as an athlete, as a coach, an instructor and as an administrator. As the director of athletics, she served on the board of directors of Canadian Interuniversity Sport (CIS) during three different decades (1982-86, 1993-97, 2003-07), including being its president (1995-97), and has been a U of T delegate to Ontario University Athletics (OUA) and its predecessors since 1977, including terms as president (1980-84) and past president (2003-07).  She built a tremendous coaching team at U of T, where under her leadership the Varsity Blues claimed 17 national titles and 126 provincial team championships.

The award was presented to Hoffman by U of T’s dean of Kinesiology and Physical Education at the University of Toronto.  Jacobs saluted Hoffman’s decades of service and the lasting impact her initiatives made on sport at U of T.

“Under Liz’s watch, University of Toronto developed gender and sport equity policies that were firsts in interuniversity sport in Canada,” Jacobs told the crowd. “Her initiatives shaped the co-curricular athletics and recreation experiences of countless—literally thousands of—U of T students on all three campuses.”

Hoffman received a standing ovation from the crowd as she came to the mic. For Hoffman, the honour was very much a family affair—literally, with her husband Rick and sons Mark and Matt at her side—and metaphorically, returning “home” to her Blues stomping groups.