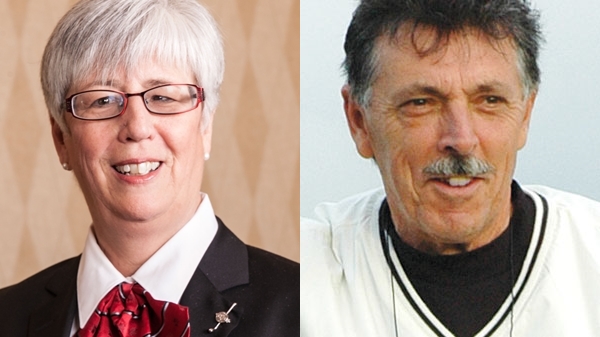 Oakville, Ont. – Longtime golf volunteer Barbara Allan of Kingston, Ont. as well as the late Norm Woods of Kitchener, Ont. – founder of both GolfScene magazine and the former GolfScene Junior Tour – will be honoured for their contributions to the game of golf as the 2014 co-recipients of Golf Canada’s Distinguished Service Award.

Golf Canada’s Distinguished Service Awards will be presented to Allan as well as Woods’ son Steve, Saturday, February 8th as part of the National Sport Organization’s Annual General Meeting to be held at the London Hilton Hotel in London, Ont.

“Golf Canada is proud to acknowledge Barbara Allan and Norm Woods and celebrate their outstanding contributions to the game of golf as our 2014 Distinguished Service Award recipients,” said Golf Canada CEO Scott Simmons. “In their own unique way, Barbara and Norm have made a significant impact on the game within their communities and across Canada. Their commitment and passion for our sport makes each of them a truly deserving recipient.”

Created in 1993, Golf Canada’s Distinguished Service Award has been awarded annually to recognize individuals who have made outstanding contributions to the game of golf in Canada.

Recipients of Golf Canada’s Distinguished Service Award are traditionally selected from within the province of the organization’s incoming president. On Saturday, February 8th, Doug Alexander of London, Ont. will be sworn in as Golf Canada’s 111th President.

As President-elect, Alexander will succeed 2013 President Mike Carroll of Vancouver.

Barbara Allan has devoted over 20 years of her adult life to the game of golf in Ontario and across the country. Allan’s passion for golf began in the 1980’s when her husband encouraged her to get into the sport.

In addition to serving as a past Chair of the Women’s Fund, Allan’s volunteer efforts with Golf Canada will continue in 2014 as a member of Governors’ Council as well as Chair of both the Amateur Championships and Heritage Committees.

As well, she currently volunteers at the club, provincial and district level and is also a past Ladies Captain of Garrison Golf Club in Kingston where she serves as the Chair of Handicap and Rules.

Highlights from her time volunteering include becoming Level 4 Rules certified with Golf Canada in 2012; serving as the non-playing captain at the Five Nations Cup in South Africa in 2007; acting as a Tournament Chair at numerous Golf Canada championships and also being a member of the duty roster of officials at each of Canada’s National Open Championships – the RBC Canadian Open and Canadian Pacific Women’s Open.

Norm Woods is remembered as a passionate sport enthusiast who strived to give individuals the opportunity to experience the game of golf. He was devoted to the benefits of health and fitness, receiving a Physical Education degree from the University of Waterloo in 1967 as well as a Masters degree in Physical Education from the University of Oregon in 1971.

He spent considerable time affiliated with the YMCA, first working as the Physical Education Director of the Kitchener-Waterloo YMCA before later becoming a program coordinator with the Regina Saskatchewan YMCA where he spearheaded programs such as KinderSwim and KinderGym. In 1975, he was one of eight Canadians selected by Concordia University to travel to Russia to experience how Russian athletes trained and would later be named Director of Preventative Health for the Saskatchewan Government.

He returned to Ontario in 1976 and while working as Vice-President of the Institute of Canadian Advertisers, was involved in the launch of the national PARTICIPACTION program as well as the building of PARTICIPARKs.

He would also become an advocate for providing scholarships to student athletes and in 1991 he purchased the regional franchise for College Prospects of America, opening the door for many student athletes across the country. His College Prospects franchise provided upwards of $5 million in scholarships for Canadian athletes including numerous competitive golfers and many others who would go on to work in the golf industry.

In 1999, he was instrumental in bringing some of the top U.S. golf coaches to Angus Glen Golf Club to showcase 144 of Ontario’s top golfers and coaches. His showcase provided many players with scholarships to U.S. universities including David Hearn as well as Sean Foley, who later went on the write his first series of instruction articles in GolfScene – a regional golf publication Woods launched in 2000 serving southwestern Ontario.

The GolfScene publication originated as a tabloid that was hand-delivered throughout the golf community. In 2008, the publication evolved into a magazine and continues to be delivered to over 340 courses and facilities.

Woods’ passion for junior golf lead to the development of the GolfScene Junior Tour, a recreational tour dedicated to providing fun golf competitions for juniors that instilled values such as integrity and fair play. The junior tour – which also encouraged parents and grandparents to play – saw Woods become a mentor, father figure and friend to countless golfers including the 2014 LPGA Tour rookie Jennifer Kirby, Team Canada members such as Corey Conners and Garrett Rank, Web.com TOUR rookie Cam Burke and PGA TOUR Canada players such as Michael Gligic.

Before his passing in 2011 at the age of 67, Woods – a past member of the Golf Journalists Association of Canada – was a social golfer who most enjoyed health benefits of walking the golf course, along with the camaraderie of friends. A mentor to many and lifelong proponent of health and wellness, Woods taught by example and provided opportunity to many enthusiasts who may have never been introduced to the game of golf.