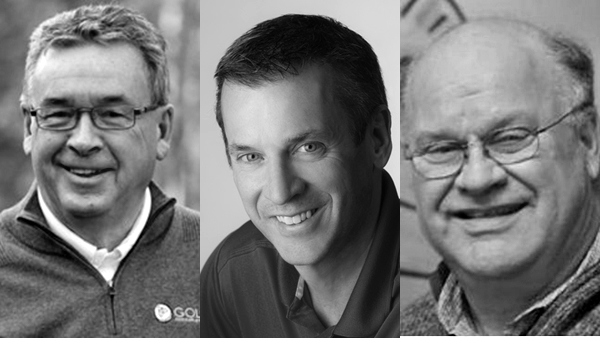 Oakville, Ont. (Golf Canada) – Former Golf Association of Ontario (GAO) Executive Director Dave Mills along with SCOREGolf Editorial Director and television personality Bob Weeks, and the late (Arthur) Gordon Stollery of Markham, Ont. will be honoured for their contributions to the game of golf as the 2015 co-recipients of Golf Canada’s Distinguished Service Award.

Golf Canada’s Distinguished Service Awards will be presented on Saturday, February 14th as part of the National Sport Organization’s Annual General Meeting to be held at the Delta Meadowvale Hotel and Conference Centre in Mississauga, Ont.

“Golf Canada is proud to acknowledge Dave Mills, Bob Weeks and Gordon Stollery and celebrate their outstanding contributions to the game of golf as our 2015 Distinguished Service Award recipients,” said Golf Canada Chief Executive Officer Scott Simmons. “They’ve all made a significant impact on the game within their communities and across Canada. Their commitment and passion for our sport makes each of them a truly deserving recipient.”

Created in 1993, Golf Canada’s Distinguished Service Award has been awarded annually to recognize individuals who have made outstanding contributions to the game of golf in Canada.

Recipients of Golf Canada’s Distinguished Service Award are traditionally selected from within the province or region of the organization’s incoming President. On Saturday, February 14th, Paul McLean of King, Ont. will be sworn in as Golf Canada’s 112th President.

Bob Weeks has been with SCOREGolf since 1987 and is currently the Editorial Director, overseeing all content at the media company. He was recently listed as the sixth most influential person and the No. 1 media person in the Canadian golf industry by the National Post.

Weeks is the host of SCOREGolf TV and the golf analyst for TSN, where he has covered more than 50 major championships as well as hundreds of top Canadian and international tournaments. For 20 years he has been the host of the SCOREGolf Show, a daily 90-second golf radio program heard in more than 70 markets across the country. An award-winning writer, Weeks also authors a highly popular blog on SCOREGolf.com, Canada’s leading golf web site, and has written for GOLF Magazine, Golf Digest, Golfweek, the Globe and Mail, Maclean’s as well as countless other publications throughout the world. Weeks, who began playing golf at the age of 11 in Prince Edward Island, has been a proud member of Weston Golf and Country Club in Toronto for more than 40 years. He is a member of the Ontario Golf Hall of Fame and winner of the Dick Grimm Award presented by the Golf Journalists Association of Canada.

Until his untimely accidental death, Gordon Stollery was a passionate golfer and dedicated supporter of the game in Canada. As a member of Rosedale Golf Club in Toronto, he won their club championship four times and was runner-up at the 1965 Canadian Junior Golf Championship. An all-round athlete, Stollery attended Princeton University and then the University of Toronto before moving to Alberta in 1979 to become involved in the oil and gas business. In 1994, when his father Arthur passed away, he returned home and became involved in Angus Glen Golf Club in Markham, Ont., which his father had built. The club, which opened in 1995, saw the hosting of multiple championship events including the 2002 and 2007 RBC Canadian Opens. In 1996, following the opening of the golf club, he took the vision of his father one step further by building a community surrounding the Angus Glen Golf Club. In 2007, Goodwood Golf Club was completed—a course he enjoyed as his private sanctuary.