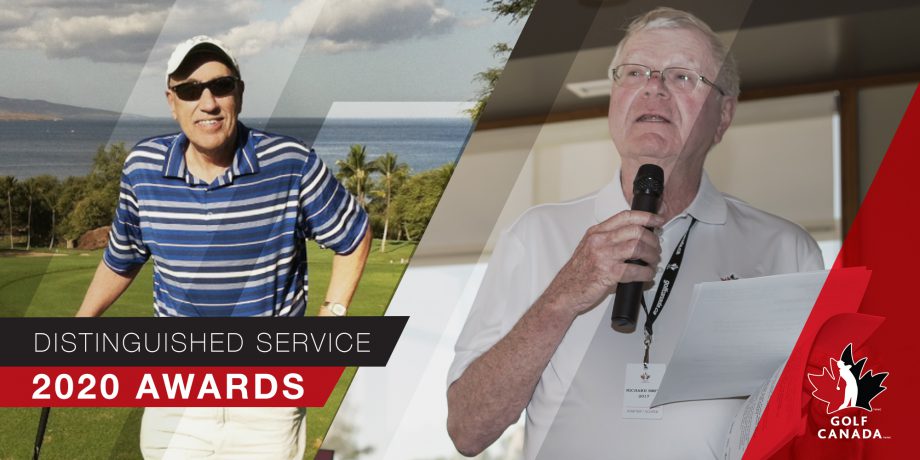 Oakville, Ont. (Golf Canada) –A pair of long-time contributors to the sport of golf – volunteer Richard Smith of Regina, Sask. and golf journalist Ian Hutchinson of Newmarket, Ont. – will be acknowledged for their tremendous contributions to the sport as the 2020 recipients of Golf Canada’s Distinguished Service Award.

The presentation of the 2020 Distinguished Service Awards to Smith and Hutchinson will take place during a dinner on Friday, February 28 as part of Golf Canada’s Annual Meeting (February 28-29) at the Hilton Toronto Airport Hotel in Mississauga, Ont.

A former president of Golf Saskatchewan, Smith has spent more than two decades volunteering provincially and at the national level with Golf Canada serving in a number of areas including championships, membership, course rating and golf programming. As a member and past Chair of Golf Canada’s Handicap and Course Rating Committee, he played an instrumental role in Canada’s preparation and education around the roll-out of the new World Handicap System which took effect in 2020.

Hutchinson is a respected sports journalist who has covered the sport of golf for more than 40 years. He is a former golf reporter and columnist for Sun Media and has contributed to a multitude of publications and outlets during his tenure including Golf Scene, Pro Shop, World of Women’s Golf, Ontario Golf Magazine, ScoreGolf and Golf Canada Magazine. In 2008, he launched Golf News Now, a digital platform devoted to coverage of the Canadian golf industry.

“Golf Canada is proud to recognize volunteer Richard Smith along with journalist Ian Hutchinson as the recipients of our 2020 Distinguished Service Award,” said Golf Canada CEO Laurence Applebaum. “Each of their respective contributions to the sport of golf has left a meaningful impact on the Canadian golf landscape. It is with great respect and admiration that we honour these individuals for their passion and commitment to our sport.”

In addition to the presentation of the Distinguished Service Awards, Golf Canada will also recognize Bill MacMillan of East Passage, N.S. as the 2019 Bruce Mitchell Volunteer of the Year.

On Saturday, February 29 during Golf Canada’s Annual General Meeting, Charlie Beaulieu of Lorraine, Qué., will be sworn in to serve a second term as President of Golf Canada.

Richard Smith of Regina, Sask. has been volunteering with Golf Saskatchewan for nearly 20 years and almost a decade with Golf Canada. Since 2003, the Katepwa Beach Golf Club member has been a key contributor to Golf Saskatchewan through his involvement with course rating, golf programming and member services. He has served on the executive committee and led Golf Saskatchewan as president in 2014-15. As a volunteer with Golf Canada, Smith has served on numerous committees and has volunteered at numerous regional and national golf championships as a starter and scorer. He has also served on Golf Canada Governor’s Council and as past chair of the Provincial Council served as a member of Golf Canada’s Board of Directors.

Among his many contributions, it was during his time as Chair of Golf Canada’s Handicap and Course Rating Committee (2015-18) and a member of the Handicap and Course Rating Committee that he was most impactful, supporting the National Sport Federation in the research, development, education and roll-out of the new World Handicap System which launched in 2020.

His leadership and commitment to Handicap and Course Rating have also been felt across the country with Smith having led numerous education seminars in Saskatchewan, Manitoba, Alberta, British Columbia and Nova Scotia. In 2018, Smith was named the Sask Sport Inc. Volunteer of the Year and was also a recipient of the Golf Saskatchewan Long-term and Exemplary Volunteer Service Award. In 2019 he was a finalist for the Bruce Mitchell Volunteer of the Year honour.

Long-time journalist Ian Hutchinson of Newmarket, Ont. has had a meaningful impact over four decades chronicling the game of golf for a variety of outlets and trade publications during his distinguished career as a reporter and columnist. His career began in 1978, covering a multitude of sports including golf for community newspapers including the Newmarket Era, Mississauga Times and Mississauga News before moving on to become an associate editor at MVP, Canada’s national sports magazine at the time.

‘Hutch’ also covered the NHL, CFL, NFL and MLB, before transitioning into full-time golf as an editor with ScoreGolf Magazine. He would go to become managing editor of World of Women’s Golf Magazine before beginning a 14-year run as golf columnist for the Toronto Sun and other Sun Media newspapers. He has contributed to various Canadian and US golf publications as an editor or writer including Pro Shop Magazine, Ontario Golf Magazine, Golf Scene Magazine and Golf Canada Magazine in addition to writing for Golf Channel’s website.

In 2008, he reinvented himself in the digital space when he founded Golf News Now, a Canadian website and daily newsletter devoted to covering the golf industry. With GNN, he has become a trusted voice in the Canadian golf industry with daily insights and reporting on all facets of the game. He continues to make frequent radio and television guest appearances and in 2017, was honoured by the Ontario Golf Hall of Fame with the Lorne Rubenstein Media Award.