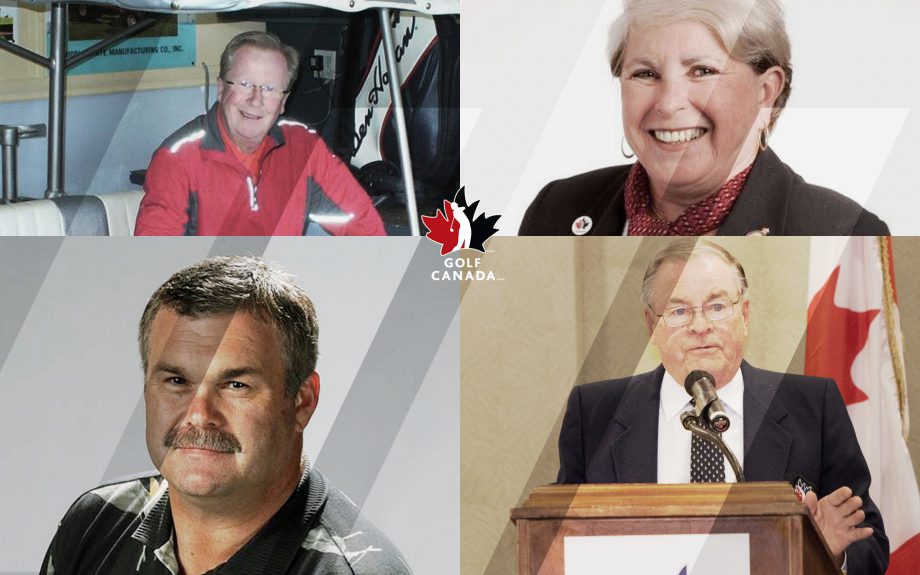 Former Alberta Golf President Fran Marsden and long-time volunteer Florin “Fuzzy” Bergh of Edmonton, along with golf historian Ron Lyons and acclaimed golf columnist Cam Cole will be acknowledged for their tremendous contributions to the game of golf as 2018 recipients of Golf Canada’s Distinguished Service Award.

The National Sport Federation’s Distinguished Service Award has been presented annually since 1993 to recognize individuals who have had an outstanding impact on Canadian golf either nationally or within their community.

Marsden has spent the past 30 years as a contributing golf volunteer in Alberta and was instrumental in the 2000 amalgamation of the former men’s and women’s provincial golf associations into what is now Alberta Golf.

Bergh is a life-long contributor to the game of golf in his community who has supported Alberta Golf and the Alberta Golf Foundation in a variety of volunteer and fundraising roles over the past three decades.

Lyons, the co-owner of the Legends Golf and Country Club in Edmonton, is regarded as one of the foremost golf historians and golf memorabilia collectors in the province of Alberta.

The presentation of the 2018 Distinguished Service Awards to Marsden, Bergh and Lyons will take place on Saturday, January 27th as part of Golf Canada’s Annual Meeting (January 25-27) at the Grey Eagle Casino and Resort in Calgary.

Cole, who covered golf over the course of a distinguished 40-year career in sport journalism, will be honoured as part of Golf Canada’s National Team Media Day which will be conducted on Monday, June 4th at Bear Mountain Resort in Victoria.

“Golf Canada is proud to recognize Fran Marsden, Florin Bergh, Ron Lyons and Cam Cole as the recipients of our 2018 Distinguished Service Award,” said Golf Canada CEO Laurence Applebaum. “Each of their respective contributions across various touchpoints in the game has left a meaningful impression on the Canadian golf landscape. It is with great respect and admiration that we honour these individuals for their passion and commitment to our sport.”

Recipients of Golf Canada’s Distinguished Service Award are often selected from within the province or region of the organization’s incoming President. On Saturday, January 27th Leslie Dunning of Calgary will be sworn in as Golf Canada’s 114th president. As president-elect, Dunning will succeed Roland Deveau of Bedford, N.S. who has served consecutive terms as President in 2016 and 2017.

In addition to the presentation of the Distinguished Service Awards, Golf Canada will also recognize Tom Zariski of Drumheller, Alta. as the 2017 Volunteer of the Year. Zariski, a Level 4 Rules of Golf official who currently serves as President of Golf Alberta, will be honoured on Saturday, January 27th during the closing dinner of Golf Canada’s Annual Meeting.

Fran Marsden has been a strong contributor to the game of golf in Alberta for more than 30 years. A long-time member of the Glendale Golf and Country Club in her hometown of Edmonton, Marsden’s volunteer efforts began in 1987 as club representative with the former Alberta Ladies Golf Association (ALGA). Her commitment to advance the game elevated her to more wide ranging involvement with the ALGA, culminating with her election as President in 1998. She would play a major role in the amalgamation of the ALGA with the Alberta Men’s Golf Association and was selected by her peers to serve as the first president of Alberta Golf in 2000, the first fully amalgamated provincial golf association in Canada. Marsden also took on the role of Executive Director of the World Masters Games Golf Event in in 2005 which attracted more than 800 golfers competing on multiple courses around Edmonton. She has contributed to provincial and national golf championships and served on numerous volunteer committees with both Alberta Golf and Golf Canada during a career which earned her the Alberta Golf Hall of Fame Distinguished Service Award in 2007.

Ron Lyons’ contributions to golf are rooted in preserving the storied history of the game. Lyons is a proud golf historian who preserves one of the world’s largest collections of vintage golf cars, tees, golf clubs, books and paraphernalia. As a historian, he has made strong contributions to Alberta Golf, the PGA of Alberta and the Golf Historical Society and has donated antique golf items to various causes over the years. He has shared his collection through antique displays at various events and golf shows and has assisted a number of golf clubs in celebrating their 50th, 75th and 100th anniversaries. Lyons also holds a stake in the game as co-owner of the Legends Golf and Country Club, a 27-hole facility in Edmonton which hosts an annual golf tournament dedicated to honouring individuals for their impact on the game. He is the founder of the Canadian Open Hickory Championship, a North American hickory club event. His collection of hickory clubs was donated for use by players and pro-am participants at the 2006 Telus Skins Game at Banff Springs Golf Course which featured Jack Nicklaus, Greg Norman, John Daly, Stephen Ames and Sergio Garcia. He owns 84 vintage golf cars and some early turf equipment which he displays in a 6800 sq ft building on the grounds of the Legends Golf and Country Club. Lyons recently completed a 320-page book on the history of the golf car.

One of Canada’s finest story tellers, Cam Cole’s distinguished career as a sports writer and columnist spans more than 40 years with the Edmonton Journal, National Post, Vancouver Sun and Post Media. As a golf columnist, he brought readers inside the ropes at golf’s biggest events including 66 major golf championships, seven Ryder Cups, six Presidents Cups and nine (RBC) Canadian Opens as well as the (CP) Canadian Women’s Open on several occasions. A native of Vegreville, Alta., Cole is a past member of the Richmond Country Club in Richmond, B.C. and a current member at the Harvest Golf Club in Kelowna, B.C. Among the nearly 400 golf courses he’s played, Cole won the Masters Tournament press lottery to play Augusta National on three separate occasions. Aside from golf, Cole covered the world’s foremost sporting events including 16 Olympics, 33 Grey Cups, 30 Stanley Cup Finals, seven World Series, 18 Super Bowls and 17 World Figure Skating Championships before retiring in December 2016. Among his many professional accolades, Cole is a two-time recipient of the Sport Media Canada Award for Outstanding Sports Writing (2004 & 2011) and was honoured by the Hockey Hall of Fame in 2017 with the Elmer Ferguson Award for excellence in hockey journalism.

Fuzzy Bergh is considered an institution as a supporter and contributor to golf in his home province of Alberta. For more than 80 years, the Edmonton, Alta. native has been a passionate golf enthusiast and champion for the health, social, business and charitable benefit that golf brings to his community. He has been an instrumental volunteer with Alberta Golf since 1990 and has led course rating activities in the province for many years. A member and former club President at Highland Golf and Country Club in Edmonton, he is a respected contributor to the game at his home club. Bergh is also a long-time fundraiser and past chair of the Alberta Golf Foundation and has been instrumental in driving the Foundation’s scholarship program. In 2015, he was recognized by the Alberta Golf Hall of Fame for his distinguished service to the game.