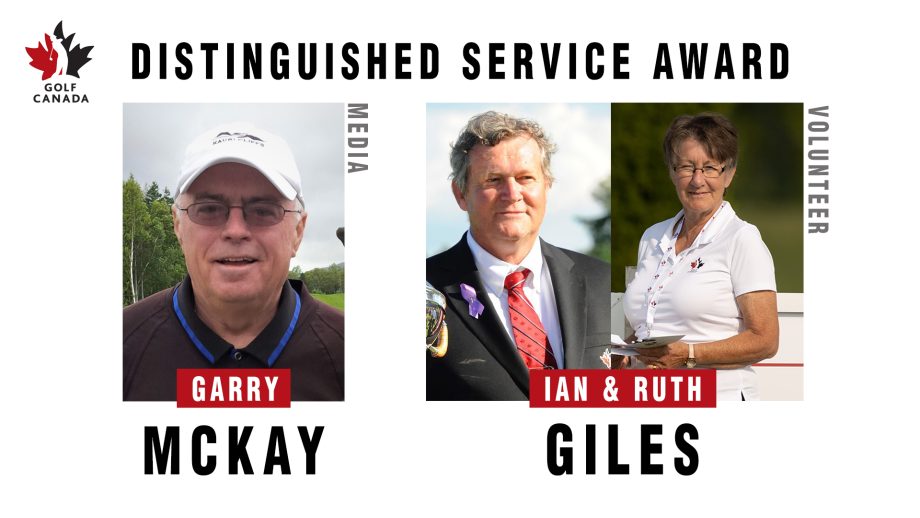 Three accomplished golf contributors from Hamilton, Ont. – tireless volunteers Ruth and Ian Giles along with esteemed golf journalist Garry McKay – will be acknowledged for their tremendous contributions to the sport as the 2022 recipients of Golf Canada’s Distinguished Service Award.

The announcement of the 2022 Distinguished Service Award honourees will be made during Golf Canada’s Annual General Meeting which will be conducted virtually on Thursday, March 3.

“Each of their collective efforts has left a meaningful mark on the Canadian golf landscape and it is with great respect and admiration that we honour each of them for their passion and commitment to our sport.”

The presentation of the Distinguished Service Award to this year’s honourees will be celebrated in person during the week of the 108th playing of the Canadian Women’s Amateur Championship, July 19-22 at Westmount Golf and Country Club in Kitchener, Ont.

The Giles’ pairing are long tenured golf volunteers who have shared their time and passion for the game with both Golf Ontario and Golf Canada, serving on numerous committees at the operational and executive level. Over the past four decades, the Hamilton residents have supported hundreds of local, provincial, national, international, and professional championships as duty roster volunteers in a rules or starting and scoring capacity.

Ian served as the President of the Ontario Golf Association (OGA) in 2001 and in 2002 helped lead the association’s amalgamation with the Ontario Ladies Golf Association – today Golf Ontario. Before becoming President, he spent six years as a Golf Ontario Director chairing numerous committees including the Ontario Golf Hall of Fame committee in 2007 and 2008. A Level 3 rules official and past governor with Golf Canada (2003-2012), Ian has given his time to numerous Golf Canada volunteer committees including the Governors Council and has also served on a number Golf Ontario Volunteer committees. In 2014, Golf Ontario named Ian the recipient of the Dick Grimm Distinguished Service Award.

The Giles’ have been long-time contributors to the Hamilton Halton Junior Golf Tour—Ruth has served since 1999 in a variety of roles including past President (2002-03), secretary and a board member. Ian served as President from 1996-98 and has also contributed over the years as a board member and rules official. The selection of Ruth and Ian Giles marks the first time that a family duo has been selected for Golf Canada’s Distinguished Service Award.

A past President and founding director of the Golf Journalists Association of Canada (GJAC), McKay is a respected sports journalist who has covered golf for more than 43 years. He first reported on the RBC Canadian Open in 1968 for CKOC radio and is highly respected as the longtime golf reporter for the Hamilton Spectator where he has covered all aspects of the sport from local golf to the professional game. McKay has also contributed to a multitude of Canadian and international publications during his tenure including Pro Shop, SCOREGolf, Ontario Golf and Golf Canada Magazine.

McKay was recognized by Golf Ontario with the 2015 Lorne Rubenstein Media Award and in 2021 was honoured by his GJAC peers with the Dick Grimm Award.

In addition to the 2022 Distinguished Service Award, Golf Canada will also celebrate Ken Casey of St. John’s, N.L. and David Atkinson, formerly Vancouver, B.C. and now Goderich, Ont. as co-recipients of the 2021 Bruce Mitchell Volunteer of the Year.

Another pair of distinguished Golf Canada volunteers – Barbara Allan of Kingston, Ont. and Jim Clark of Aurora, Ont.– will be named Honorary Life Governors for their long serving contributions to the organization.

Golf Canada’s Annual General Meeting will culminate with Liz Hoffman of Wasaga Beach, Ont., a member of both Mad River Golf Club and The Thornhill Club sworn in to serve a second term as President of Golf Canada.