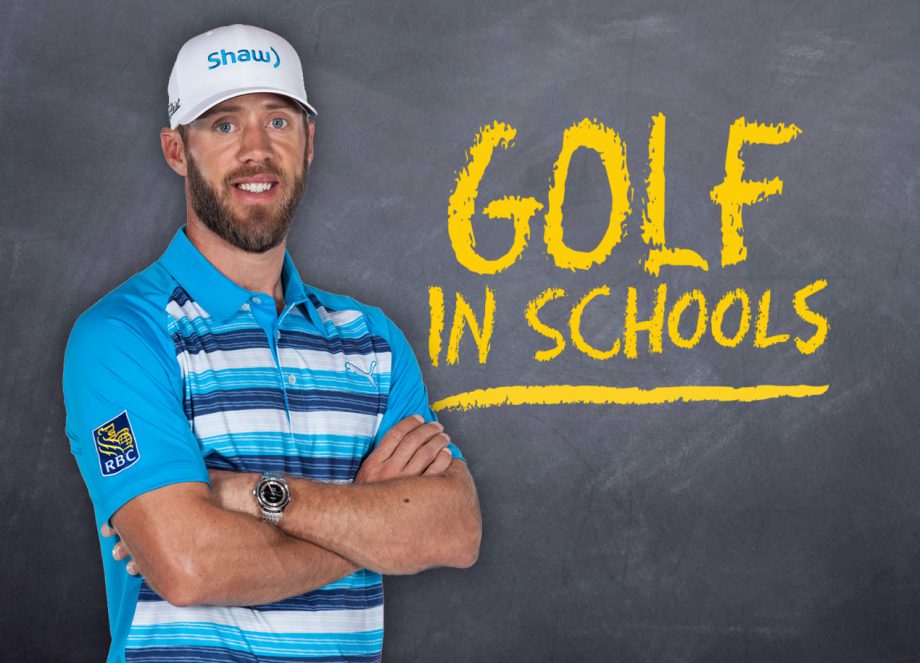 Listen in to our announcement…

Golf Canada is pleased to announce that Canadian PGA TOUR star Graham DeLaet has been named as an ambassador for the Golf in Schools program.

DeLaet, currently the top-ranked Canadian on the Official World Golf Ranking (#86), will appear in Golf in Schools promotional materials—including learning resources and videos in addition to hosting a Golf in Schools junior clinic during the fall to raise excitement in the sport as students head back to school. As part of his relationship with Golf in Schools, DeLaet will also raise money through his Foundation, the Graham and Ruby DeLaet Foundation, to adopt schools into the program in communities across Canada.

“When Ruby and I started our Foundation, we wanted to ensure that it supported golf at the grassroots level – and the Golf in Schools program is making a big contribution in bridging the gap. We believe that it is important to introduce golf to schools so that kids can start learning the sport early, seeing more kids with clubs in their hands, and ultimately growing the game of golf,” said DeLaet, a graduate of Golf Canada’s National Team program.

Currently offered in more than 2,400 elementary and close to 300 high schools across Canada, Golf in Schools provides children with a basic introduction to golf through the Canadian school physical education curriculum. The program features three curriculum levels – Grades 2– 5 and high school level along with the newly launched intermediate level for students in Grade 6–8.

Launched in 2009, the Golf in Schools program—which is endorsed by Physical Health and Education Canada (PHE Canada)—is conducted by Golf Canada in partnership with the PGA of Canada and the provincial golf associations. The Golf in Schools program consists of safety-approved golf equipment, along with a relevant teaching resource for teachers to deliver lesson plans to students.

New in 2015, Golf Canada partnered with the University of Ottawa to include a Life Skills component throughout all three levels of the program. The Life Skills element incorporates fundamental skills and values such as respect, perseverance, and honesty—all of which are fully integrated into the teacher-friendly learning resources.

“We are extremely proud to welcome Graham DeLaet as our Golf in Schools Ambassador,” said Jeff Thompson, Golf Canada’s Chief Sport Officer.  “Having Canada’s No. 1 ranked professional golfer extend his support and generosity to junior golf through his Foundation is outstanding. Graham is an incredibly talented golfer with a passion to give back to a game that’s given him so much.”

DeLaet’s support of the Golf in Schools program dates to back to September 2014, when along with his wife Ruby, donated $1 per twitter follower (@Fore_Kids) to Golf in Schools upon launching the Graham and Ruby DeLaet Foundation.

Golf in Schools – by the numbers:

More information about the Golf in Schools program including the school adoption program is available at www.nationalgolfinschools.com.