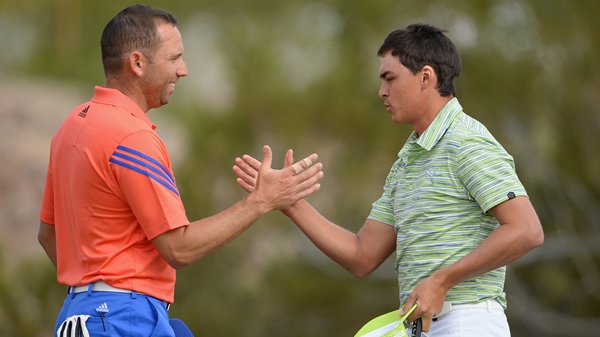 As the Chair of Golf Canada’s Rules of Golf Committee, I have the privilege of representing Golf Canada at several international tournaments each year.  This past week I was part of the Rules Committee at the PGA Tour’s Accenture Match Play Championship, held in Tucson, Arizona.

Except for the first round, when there are 32 matches, all other matches are accompanied by a walking referee.  We are assigned to a particular match and accompany the players throughout the round to assist them in interpreting and applying the golf’s rules.  While walking with a match is, in my opinion, the best way to see the highest of level of golf be played, it is frequently without incident.  The players often will play an entire match without needing the assistance of a referee.

Such was not the case during the third day of the championship when I was assigned to be the referee accompanying Sergio Garcia and Rickie Fowler.

The round started easily enough, Sergio and Fowler were clearly comfortable playing with one another and I was able to witness some first rate golf.  It all changed at the par three sixth hole when Garcia’s tee shot ended up very near a sprinkler head close to the green.  Because of the desert conditions found in the Tucson area, moisture is scarce and animals and insects are always eager to find a ready supply of water.  And so it was that, because this sprinkler head had a very small leak, a large number of bees, perhaps upwards of a hundred, had gathered to take advantage of their version of an oasis in the desert.

Sergio went to his ball, saw a number of bees buzzing about and called me over.  He explained he had had a very bad experience with bees in the past and wanted to know if he had to play his next shot with the bees flying around him.  Fortunately, the rules are not without heart and players are entitled to free relief when confronted with a “dangerous situation”.   In fact, Decision 1-4/10 deals with bees specifically and I was able to help Mr. Garcia determine the nearest point that the bees were not an issue and he dropped his ball within 1 club length of that spot, no nearer the hole.

However, probably because Sergio, his caddie and I had been waking in the area, the bees had become more active and had expanded the area they were occupying.  Sergio addressed his ball two or three times and then backed off, not confident the bee issue was resolved.  I felt the dangerous situation had now expanded to include the area where the first drop occurred and stepped in to indicate Sergio could take another drop, this time farther from the sprinkler head.  We determined a new nearest point of relief, Sergio dropped the ball within one club length of that spot and played his shot free the bee situation.

I was able to watch a replay of the incident later that night and enjoyed the light hearted banter the TV announcers had as all this was transpiring on the screen.

At the time of the ruling, I was not too worried about the bees, they appeared to be normal honey bees and, although probably capable of stinging, they did not seem aggressive.  Imagine my surprise when, in talking about the ruling with one of the tournament volunteers the next day, I was told that in all likelihood my innocent honey bees were a hybrid of a type of African bee that could be very aggressive and dangerous and, in fact, Sergio was most definitively faced with a dangerous situation.  In this case, the rules worked to the player’s advantage and helped him out of a sticky situation!

The match then moved onto the seventh hole.  Both players ended up fairly near the hole, with par putts, Sergio having a 6 foot putt and Rickie having about 17 feet.  Rickie had begun his pre-shot routine, and was crouched behind his ball when he and Sergio began talking.  The conversation seemed quite light hearted and the gallery chuckled at the enjoyment the players seemed to be taking in the situation.  I thought it quite odd that such a conversation was taking place after Rickie had begun his pre-shot routine.  The next thing the gallery and I saw, was both players picking up their ball markers and walking off the green.

One of the duties of a walking referee is to announce the results of the hole just completed and the status of the match.  In such cases I might announce, “Mr. Garcia makes 4, Mr. Fowler makes 4 and the match remains All Square.”  Such was my surprise at the seventh hole that I was unclear what had just transpired and the announcement was never made, I just walked behind the players over to the 8th tee, still working out what had happened and the status of the match.

It quickly became clear that both Sergio and Rickie had made use of Rule 2-4, which sets, in part, “A player may concede his opponent’s next stroke at any time, provided the opponent’s ball is at rest.”  In language most golfers are used to, they had agreed their putts were “good for good”.  It was a very unusual move by Sergio to concede Rickie’s lengthy putt but he stated afterword he felt the bee incident on the previous hole had not been fair to Rickie who had a makeable birdie putt that he missed.  The concessions by both players was sportsmanship of the highest level and it was consistent with how they conducted themselves throughout the match.  They were complementary of each other’s shots, seemed to enjoy each other’s company but played a hard fought and well played  match.

It was a pleasure to play a very small part in the match and to witness great play by great players.