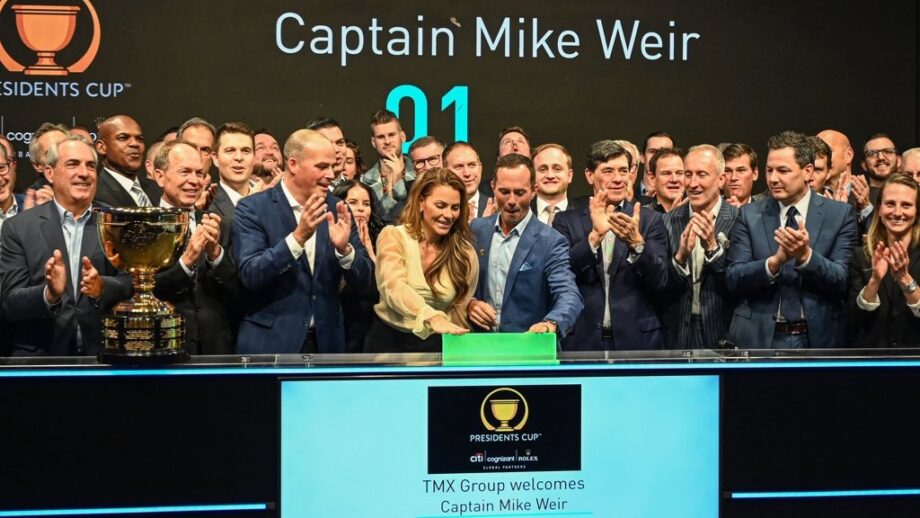 Gold confetti rained down as Weir pressed the button that formally stops trading for the day at the Toronto Stock Exchange.

“I swear, I thought it was still the bell not the button, I guess I’m getting old,” Weir said with a laugh. “It was really fun to do that. Get out to a new network of people, bring golf to the business side of Canada, get those people engaged, not just the golfers.”

The 52-year-old from from Brights Grove, Ont., is the winningest men’s golfer in Canadian history with eight victories on the PGA Tour, including earning the green jacket at the 2003 Masters.

Weir was formally introduced as the captain of the international team for the 2024 Presidents Cup on Wednesday at the Bell Centre in Montreal.

Although Royal Montreal Golf Club will host the next Presidents Cup, Weir said it was “very important” to include all of Canada in the event and give the international event a true home-course experience.

“We have a huge country land-wise to try to bring everybody together as best we can and make sure that they feel like this is part of our golf legacy,” said Weir. “We want people coming from Vancouver, Calgary, Edmonton, from the East Coast, Halifax.

“I’m hoping they want to come and see the best players in the world compete.”

Weir was the first Canadian to ever play in the star-studded event that sees the best golfers from around the world, minus Europe, play the top players from the United States.

Corey Conners of Listowel, Ont., and Taylor Pendrith of Richmond Hill, Ont., both played for the international team at the 2022 edition, making it the first time two Canadians played in the tournament.

Weir was an assistant captain for the third time this past September when the Americans won 17 1/2 to 12 1/2 at the Quail Hollow Club outside Charlotte, N.C.

He said that as soon as he was officially named the captain his phone started blowing up with messages from Canadian golfers hoping to make the team in two years’ time.

“We’ve had a WhatsApp chat going for a long time and yeah, I got a bunch of nice texts in there from the guys,” said Weir.