Golfers barred from throwing items to fans at Phoenix Open 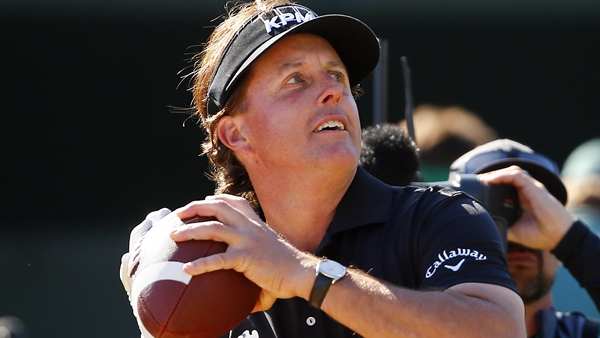 HONOLULU – The PGA Tour already has banned the caddie races on the infamous par-3 16th hole at the Phoenix Open. Next on the taboo list: tossing items to fans in the grandstands at golf’s rowdiest hole.

A notice was posted in the locker room Tuesday at Waialae that said, “At this year’s Waste Management Phoenix open, for fan safety reasons, players and caddies are prohibited from throwing, kicking or otherwise propelling items into the crowd on the 16th hole.”

Someone wrote on the top of the notice, “ARE YOU KIDDING ME?”

Players won’t be able to claim ignorance. Andy Pazder, the tour’s chief of operations, said the notice would be posted at the TPC Scottsdale, in the tent on the tee boxes before a player starts his round and even on the electronic scoreboard on the 16 hole.

How it gets enforced is another matter. Pazder made a small clarification by using the word “indiscriminately” throwing objects. In recent years, Rickie Fowler has tossed hats into the grandstand and Bubba Watson is becoming famous for the swag he throws into the bleachers. What first got the tour’s attention was Padraig Harrington kicking a football into the stands. That’s now forbidden.

“If a player is going by handing them out or flipping them to someone in the first row, that’s fine,” he said. “But not going by throwing things like a Frisbee.”

At issue was safety, much like how the NFL bans players from heaving a football into the stands after a touchdown.

“A fan in public seating in a mad scramble to get a hat is going to hurt himself, or land on top of another person,” he said. “I would say to the players, `Think about the liability.'”

Pazder said he has talked to Watson, among other players, and didn’t receive too much pushback. But as the handwritten addition to the notice indicated, he’s aware the tour will get criticized as the “No Fun Police.”

As if the Phoenix Open isn’t rowdy enough, Tiger Woods is playing the tournament Jan. 29-Feb. 1 for the first time since 2001.