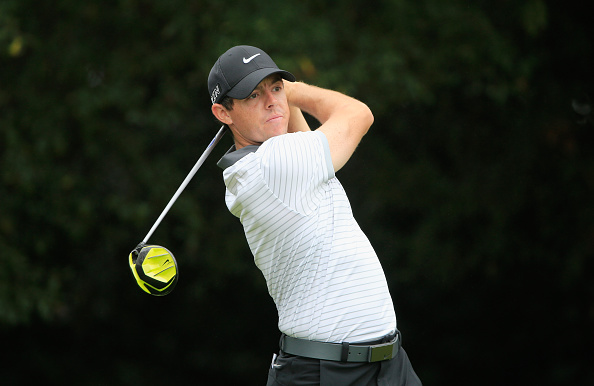 ATLANTA – As Tiger Woods recovers from another operation on his increasingly creaky body, the Tour Championships goes on without him at soggy East Lake.

Tiger’s era is over.

It’s time for everyone – fans, media, sponsors – to fully embrace the new vanguards of the game.

Golf’s in very capable hands, even more so when you throw Rickie Fowler into the mix.

“It’s been fun to be a part of this whole group,” Day said. “Golf is in such a good spot now with where we are with the youth of the game, how we’re growing the game.’

There have been only a handful of periods during golf’s modern era (since the PGA Championship became a stroke-play event in 1958) when at least three players under the age of 28 have held major titles.

This new Big Three already have seven among them, and it’s only a matter of time before Fowler joins them in that exclusive club.

None of these guys is likely to surpass Woods’ legacy, which stands at 14 major titles – more than anyone except Jack Nicklaus.

Woods was a transformational figure, a once-in-a-generation athlete whose drawing power extended beyond the golf course. Many of the folks who cheered him on didn’t know or really care about the game itself. They were simply enamored, rightly so, with someone who played it better than anyone ever had. Being an African-American in a predominantly white sport only heightened Woods’ influence. When he was in the field, the crowds ballooned, the TV ratings skyrocketed.

McIlroy, Spieth and Day won’t have that sort of impact.

But golf should consider itself very fortunate.

The game couldn’t have hoped for much better when it came to filling the post-Tiger void, producing three players who cover all of golf’s major power bases: Europe, the United States and Australia.

McIlroy, from Northern Ireland, won the final two majors of 2014. Spieth, from Texas, took the first two this year. Day, from Australia, won the most recent. The only one to escape that trio’s grasp during that span was the British Open at St. Andrews, where Spieth and Day both finished one shot out of a three-man playoff won by Zach Johnson.

“The back and forth is fantastic,” Day said.

Only 22, Spieth has put together one of the greatest years in the history of the sport. His victories at the Masters and the U.S. Open – not to mention his close call at the British Open and runner-up finish to Day in the PGA Championship – should be enough to give him the PGA Tour’s player of the year award.

The 26-year-old McIlroy was sidetracked by a fluke injury while playing soccer with his mates, forcing him to sit out St. Andrews. But he’s already got four major titles and merely needs the Masters to wrap up his career Grand Slam.

Then there’s Day, whose career was marked by several close calls in the majors until his dominating romp at Whistling Straits last month. The 27-year-old has won two more times since then in the FedEx Cup playoff, surging to No. 1 in the world rankings ahead of McIlroy and Spieth, who went back and forth with the top spot over the previous month.

Get used to that sort of flip-flopping.

“We’re fearless,” said Spieth, whose 66 Friday left him just three shots behind leader Henrik Stenson. “You obviously need a bit of luck, but luck comes from believing luck will come. Luck comes from a self-belief that you have, the ability to close the deal out.”

Already, there are comparisons to another Big Three, maybe the greatest of them all: Nicklaus, Arnold Palmer and Gary Player, who dominated the game in the early 1960s and wound up with a total of 34 major championships.

Let’s not get too far ahead of ourselves.

“It’s a nice conversation to be a part of,” said McIlroy, six strokes off the pace going to the weekend, while Day was three more shots behind. “Jordan’s sort of like the Jack, methodical and sort of does everything that way. … I would be Gary, because I’m the smallest. And then I guess that would leave Jason as Arnie.”

While McIlroy was only kidding, he wasn’t totally off base.

Personality-wise, this trio is certainly more in line with Nicklaus, Player and Palmer than they are with the usually distant Woods.

Day joked to reporters that if he won the $10 million prize that’s up for grabs this week, “I might buy a few more V-necks from Target.” Spieth photobombed a couple of female fans posing for a picture during a practice round, playfully sticking out his tongue and giving a thumbs-up as he walked into their frame. McIlroy talking openly about a year that didn’t go quite as he had hoped, conceding that “I maybe put a little too much pressure on myself.”

They’re not Tiger, but that’s OK.

Golf is doing just fine without him.