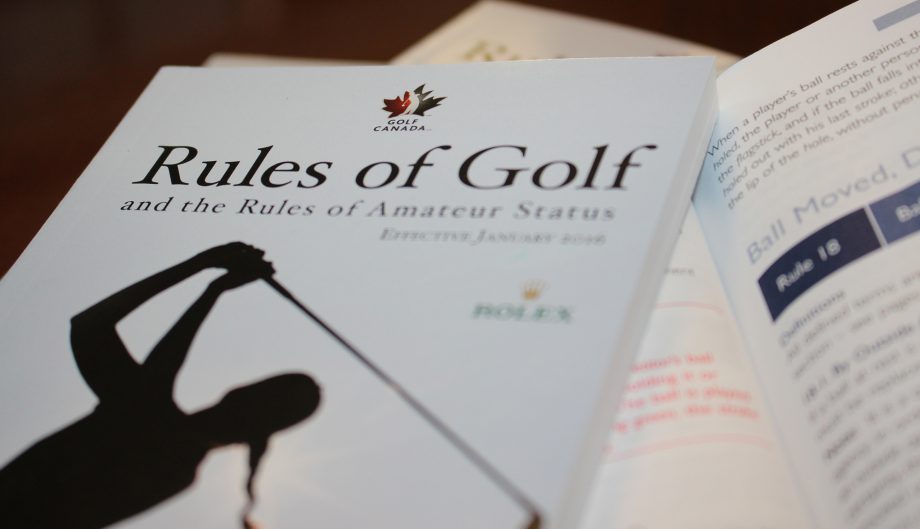 As the National Sport Federation and governing body of golf in Canada, Golf Canada, in conjunction with the R&A and the United States Golf Association (USGA), has unveiled a preview of the proposed new Rules of Golf. This joint initiative was designed to modernize the Rules and make them easier to understand and apply.

The online release of this preview by the R&A and USGA begins a six-month feedback and evaluation period during which all golfers worldwide can learn about the proposed changes and provide input before they are finalized in 2018 and take effect on 1 January 2019.

The announcement follows a comprehensive review process that began in 2012 with a working group of key R&A and USGA Rules administrators, a Golf Canada representative, professional tour officials and other Rules experts. While the Rules are revised every four years, this is the first fundamental review since 1984, and was established to ensure the Rules fit the needs of today’s game and the way it is played around the world.

David Rickman, Executive Director – Governance at The R&A, said, “Our aim is to make the Rules easier to understand and to apply for all golfers. We have looked at every Rule to try to find ways to make them more intuitive and straightforward, and we believe we have identified many significant improvements. It is important that the Rules continue to evolve and remain in tune with the way the modern game is played, but we have been careful not to change the game’s longstanding principles and character.”

“We are excited and encouraged by the potential this work brings, both through the proposed new Rules and the opportunities to use technology to deliver them,” said Thomas Pagel, Senior Director of Rules & Amateur Status for the USGA. “We look forward to an ongoing conversation with golfers during the feedback period in the months ahead.”

“There was considerable effort, exploration and dialogue around how these proposed changes would both modernize the Rules and make them easier for all golfers to understand and apply,” said Adam Helmer, Director of Rules, Competitions and Amateur Status with Golf Canada. “We encourage Canadian golf enthusiasts to review the proposed Rules changes and participate in the feedback process of the next six months.”

The proposed 24 new Rules, reduced from the current 34, have been written in a user-friendly style with shorter sentences, commonly used phrases, bulleted lists and explanatory headings. The initiative also focuses on assessing the overall consistency, simplicity and fairness of the Rules for play.

The Rules are currently delivered in more than 30 languages, and the proposed wording will support easier translation worldwide. When adopted, the Rules will be supported by technology that allows the use of images, videos and graphics.

Highlights of the proposed Rule changes include:

– Elimination or reduction of “ball moved” penalties: There will be no penalty for accidentally moving a ball on the putting green or in searching for a ball; and a player is not responsible for causing a ball to move unless it is “virtually certain” that he or she did so.

– Relaxed rules for “penalty areas” (currently called “water hazards”): Red and yellow-marked penalty areas may cover areas of desert, jungle, lava rock, etc., in addition to areas of water; expanded use of red penalty areas where lateral relief is allowed; and there will be no penalty for moving loose impediments or touching the ground or water in a penalty area.

– Relaxed bunker rules: There will be no penalty for moving loose impediments in a bunker or for generally touching the sand with a hand or club. A limited set of restrictions (such as not grounding the club right next to the ball) is kept to preserve the challenge of playing from the sand; however, an extra relief option is added for an unplayable ball in a bunker, allowing the ball to be played from outside the bunker with a two-stroke penalty.

– Relying on player integrity: A player’s “reasonable judgment” when estimating or measuring a spot, point, line, area or distance will be upheld, even if video evidence later shows it to be wrong; and elimination of announcement procedures when lifting a ball to identify it or to see if it is damaged.

– Pace-of-play support: Reduced time for searching for a lost ball (from five minutes to three); affirmative encouragement of “ready golf” in stroke play; recommending that players take no more than 40 seconds to play a stroke and other changes intended to help with pace of play.

A series of materials have also been prepared to explain the proposed Rule changes and provide background on the initiative. Found on randa.org and usga.org/rules, they include:

– Overview of the Rules Modernization Initiative: goals, proposed changes and process for implementation in 2019

– Draft New Rules of Golf for 2019: the full text of proposed Rules 1-24 and Definitions

– Draft Player’s Edition of the New Rules of Golf for 2019: Written from the perspective of “you” the golfer, this shorter version covers the most commonly used Rules and is meant to be the rule book golfers will use when finalized and adopted in 2019

– Explanation for Each Major Proposed Change in the New Rules of Golf for 2019: Short summaries of each major proposed change

– Videos and Infographics: Visual explanations of the proposed Rules.

Golfers are encouraged to review the proposed changes and submit feedback online via worldwide survey technology that can be accessed at randa.org or usga.org/rules from now until 31 August 2017.

The feedback will be reviewed by golf’s governing bodies in establishing the approved final version of golf’s new Rules. These are due to be released in mid-2018 ahead of a 1 January 2019 implementation. Social media users can also follow the discussion using #GolfRules2019.

Players are reminded that the current 2016 Edition of the Rules of Golf remain in force when playing, posting scores or competing, until the new Rules are officially adopted by The R&A and the USGA as well as Golf Canada in 2019. The Rules of Amateur Status and the Rules of Equipment Standards were not part of this review process.