Golf’s next big thing has some kid in him 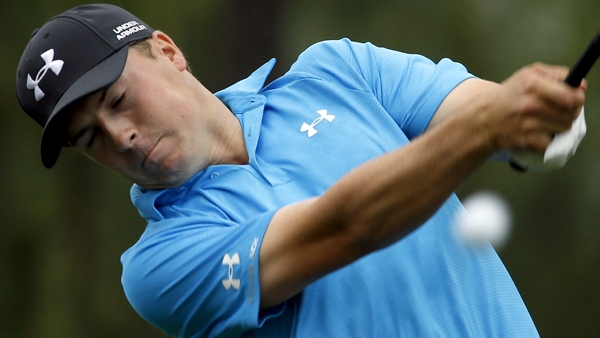 AUGUSTA, Ga. – The kid talks to himself on the course. And not just a little.

Jordan Spieth has already been tabbed as golf’s next big thing, and he did nothing to diminish that prospect Saturday with a second straight 70 at the Masters. When he goes off as co-leader with Bubba Watson in the final group of the final round, he’ll be the first Masters rookie to do so since Brian Henninger nearly 20 years ago.

Yet every so often, Spieth does something that reminds you that he’s still only 20. After a bad tee shot at No. 13, he twirled his driver over his left shoulder before losing interest and letting it drop like a bored majorette. A hole earlier, Spieth watched his short iron shot buffeted by the swirling winds at Amen Corner, dropped to the ground and began praying a gust would hold it up just enough to find the green.

“When it landed, I started laughing and looked back at Michael (Greller, his caddie) and said, `Don’t give me any crap for that, because I wanted that one really bad,'” Spieth said.

Not a problem. Greller has been with Spieth long enough to know when to hold his tongue.

“Lot of monologue. Lot of dialogue,” is how the caddie described their tour across Augusta National. “He can be pretty hard on himself.”

“Doesn’t it bother you?” someone asked.

“No,” Greller laughed. “I was a sixth-grade teacher for 10 years. I know how to be patient.”

Spieth’s rise has been anything but patient. He skipped steps including his final three years at the University of Texas and golf’s minor circuits. Within a year, he had won a tournament and made the U.S. Presidents Cup team. His team says the success is a byproduct of plenty of careful preparation.

After leading the Longhorns to an NCAA championship, Spieth and his father drew up a spreadsheet, plotting the quickest route to the PGA Tour. A win at the John Deere last July rendered that plan obsolete.

Spieth shot 62 playing alongside Phil Mickelson at the Deutsche Bank tournament last September. Before Mickelson even left the course, the five-time major winner texted Presidents Cup captain Fred Couples and told him to put the youngster on the team.

In January, playing with Tiger Woods for the first time, Spieth beat Woods 71-72 in the first round and then drummed him 63-71 the next day.

Spieth downloads knowledge from everyone and anyone and then generously hands back the credit. Not long after his first tour win punched his ticket to the Masters, he began lining up mentors.

“I told Michael I was going to buy a T-shirt for him that says, `Carl says’ because he keeps saying that to me out there,” Spieth said.

“Mr. Crenshaw was very helpful,” he added. “I had a little talk with Mr. Nicklaus, and he helped me out, too – this was Wednesday evening at a dinner here. So those guys, which I think are pretty good guys to learn something about the golf course from, you know, have really helped.”

The one thing none of them could prepare Spieth for was speed of the greens, especially after three days of sunshine and soft breezes sucked most of the moisture out of them.

“There are front pins that you really couldn’t stay below, so you’re going to be putting downhill, downgrain, and it’s almost like you’re putting on rolling gravel.

“It was crazy, crazy fast out there,” Spieth said, nodding his head for emphasis. “I’ve never putted on greens like this before.”

If Spieth is as quick a study as his brief career suggests, he’ll find a way to navigate them one more time and offset Watson’s edge in experience. A win would make him the first rookie champion since Fuzzy Zoeller in 1979.

Spieth already treads the line between confident and cocky with a poise that belies his years. After hearing him repeatedly refer to “Mr. Crenshaw” and “Mr. Nicklaus,” someone asked, “What’s your age cutoff for calling anybody mister?”

“Anybody older than me,” he replied.

“Yeah, Mr. Watson, for sure,” Spieth said with a mischievous smile. “Just because it’ll mess with him.”