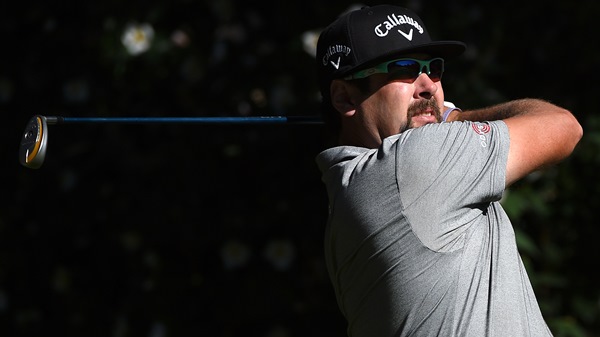 NAPA, Calif. – The new PGA Tour season felt like an old one to a trio of Ryder Cup players Thursday at the Frys.com Open.

Hunter Mahan, Matt Kuchar and Jimmy Walker met on the 10th tee at Silverado. With a morning chill in the air and beautiful scenery of Napa Valley, it was vaguely similar to the rolling hills of Gleneagles just two weeks ago at the Ryder Cup.

Except that no one was singing. There was hardly anyone in the grandstand, or on the golf course.

“It’s a little strange off the tee when no one is really here at 7:45,” Mahan said after opening with a 2-under 70, leaving him four shots out of the lead. “And out there at 7, everyone is singing along and the party is already started.”

It was back to normal for those three Americans, along with Lee Westwood of England, who made two late birdies to salvage a 73.

And it was another chance for Andres Gonzalez, who made it back to the PGA Tour for the third time. He has yet to keep his card, and while this was only the first round of the new wraparound season, he was plenty happy with no bogeys on his card and a 6-under 66.

Sang-Moon Bae made seven birdies in the afternoon and joined Gonzalez at 66. They were a shot ahead of Martin Laird. Brooks Koepka was in a large group at 68.

The star attraction at the Frys.com Open was the Ryder Cup trio, and there were about 500 people tagging along by the end of their round. The par-5 ninth summed up the round for each of them.

Mahan lagged perfectly from 75 feet for a two-putt birdie. Kuchar showed off a sharp short game, and his pitch from short of the green struck the pin and settled about a foot away. He shot 71. Walker thought his full wedge was perfect until it took a hard hop and landed in a gnarly spot in the rough, leading to a bogey and a 75.

Most of them would have preferred at least another week off.

Walker is defending a title for the first time in his career. Mahan and Kuchar are at the Frys.com Open as part of a deal with the PGA Tour for letting them play an exhibition in Turkey two years ago. Tiger Woods and Rory McIlroy also were supposed to play this year until they deferred, McIlroy because he was wiped out from a busy summer of winning back-to-back majors, Woods while he tries to regain his explosiveness from back surgery earlier in the year.

The tour is in its second year of a wraparound season that starts in October and ends with the Tour Championship in September, and it’s still hard to digest that everyone is starting over at Silverado.

Adam Hadwin of Abbotsford, B.C. and Ottawa’s Brad Fritsch lead the Canadians after opening with matching 2-under 70s. They duo has a share of 25th spot.

Graham DeLaet of Weyburn, Sask. was a shot back, carding a 71, while Brantford, Ont. native David Hearn is at even-par thanks to a 72.

Thursday’s round marked Hadwin and Taylor’s first as full-time members of the PGA Tour.