Good ribs, bad stomach, and McIlroy 1 off lead in return 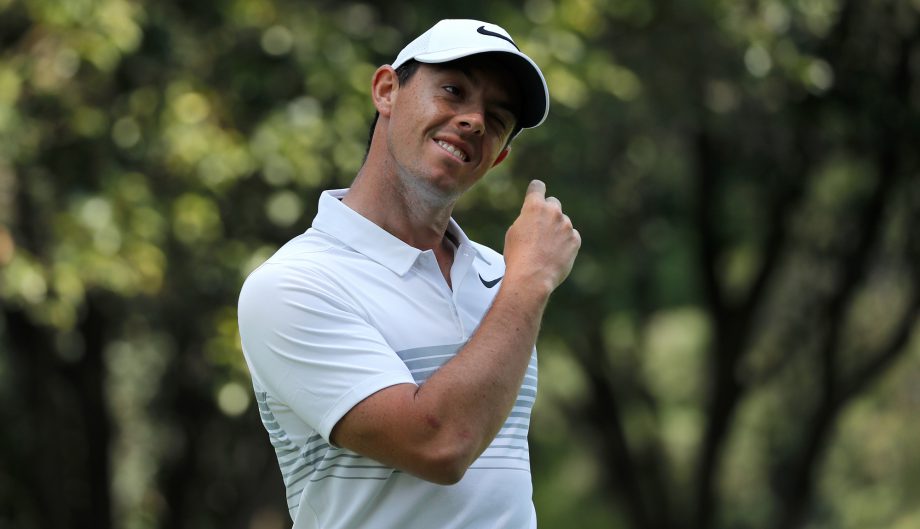 MEXICO CITY – Rory McIlroy leaned over and rested his hand on the top of his driver. At the turn, waiting for the green to clear, he twirled half of a bagel in his finger and then ducked inside a tent to sit on a table. In his return to golf after seven weeks, he didn’t look to be in the best of shape Thursday at the Mexico Championship.

Only it was his stomach, not his ribs.

As for his golf? That looked to be as good as ever.

McIlroy, playing for the first time since Jan. 15 because of a hairline rib fracture, was rarely out of position, blasted a 4-iron out of the rough from 256 yards to set up an eagle and wound up with a 3-under 68. He finished the opening round at Chapultepec Golf Club one shot out of a six-way tie for the lead.

Phil Mickelson and Lee Westwood, two of the four players who were in the field for the first edition of this World Golf Championships event in 1999, each shot 67 and were joined at the top by PGA champion Jimmy Walker, Ross Fisher, Jon Rahm of Spain and Ryan Moore.

Westwood and Walker each made it to 6 under until two bogeys over their final few holes.

It was an impressive return for McIlroy, and equally impressive was the debut of Chapultepec, hosting this WGC event after it spent nine years at Trump Doral.

“I’ve waited long enough to play,” McIlroy said. “I wanted to get out here and be competitive and try to shoot a good score. I don’t feel anywhere near as bad as I did in China last year when I had the same thing. So hopefully, it’s just a day thing and it will pass.”

British Open champion Henrik Stenson wasn’t so fortunate. He withdrew after 11 holes with a stomach virus.

The biggest surprise was Chapultepec, hosting the best players in the world at nearly 7,800 feet. Roberto Castro hit a tee shot 407 yards. Mickelson hit one 379 yards, his longest in recent years without hitting a cart path. Dustin Johnson, in his debut at No. 1 in the world, hit 3-wood on the 316-yard first hole that bounded over the green, into the hedges and out-of-bounds.

For all that length, no one could do better than 67. Only 27 players in the 77-man field broke par.

“Even though the golf course doesn’t play long because of the altitude, it is challenging in many other respects with the precision of the irons, the small targets that the greens present and the speed and undulation of the greens,” Mickelson said.

Westwood certainly didn’t expect to make eight birdies, and he wasn’t all that disappointed with his two bogeys at the end.

“It’s a great golf course,” Westwood said. “You’ve got to be really patient. It’s a pleasure to play a golf course where your caddie doesn’t hand you the driver walking off the previous green. You’ve got to put in a bit of thought on this golf course.”

Westwood, Mickelson, Sergio Garcia (68) and Jim Furyk (77) were all at Valderrama in 1999 for what was then the American Express Championship. It was the one WGC originally designed to travel, and when the PGA Tour couldn’t secure at sponsor at Trump Doral outside Miami, it moved to Mexico City.

The crowd was loud and energized, no cheer louder than when Justin Thomas holed a punch-and-run from 103 yards on No. 4.

That was about the time Walker reached 6 under with a birdie on the par-5 sixth hole. But he was a victim of the thin air on the par-3 seventh when his 7-iron on the 235-yard seventh hole bounced hard and went all the way to the back of the green, leading to a three-putt bogey. He went long again on No. 8, leaving him a chip that didn’t even reach the green. If it had, it might have run some 70 feet back into the fairway because of the slope.

“Good to post a 4 under, especially on a course … no one has seen it,” Walker said.

No one was more flummoxed than Johnson, who played as well as anyone and got nothing out of it on the poa greens. He won on the poa at Riviera two weeks ago by five shots. This time, he didn’t get the right bounces and turns. Johnson missed six putts from 6 feet or closer and still managed a 70.

“That’s how it goes,” he said. “The greens are a little tricky. I felt like I hit the ball really well, though. I scored poorly. I missed five putts inside 4, 5 feet. That’s the difference between playing a really good round and just playing an OK round.”

Jordan Spieth had an OK round. He had two early bogeys and had to rally to get back to 71.