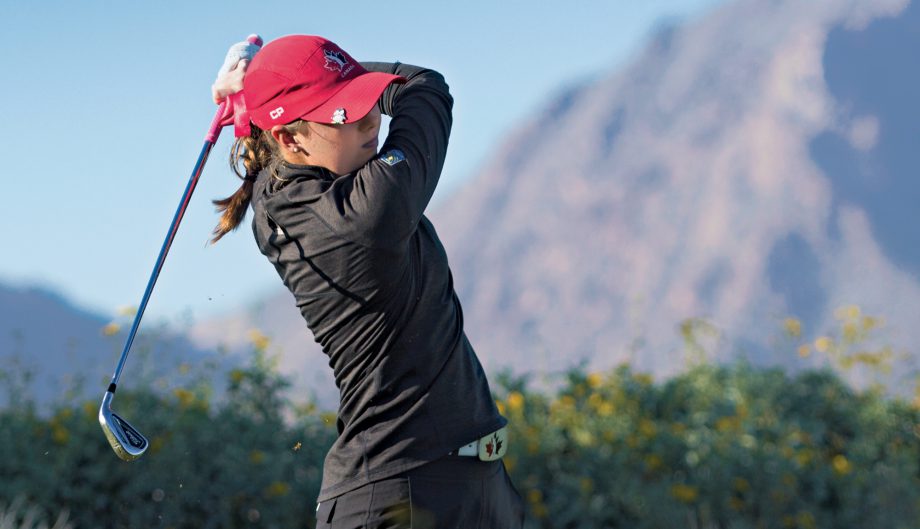 The sun has nearly disappeared at LPGA International in Daytona Beach, Fla., and there is a smattering of collegiate golfers wrapping up practice for the day. A mix of kids in pink, white and dark blue shirts mingle and then depart the large putting green, heading back to their rooms or maybe, because it’s Monday and the chicken wings are on special, to Houligan’s, a multi-level sports bar adjacent to the Daytona International Speedway.

But not Grace St-Germain.

She’s still on that practice green, knocking in a couple more putts before swatting away some mosquitoes — out for blood once the sun goes down — and flashing a big smile at a lingering reporter.

One of those mosquitoes catches her left arm, revealing for the first time a tattoo, visible only as she tries to flick away the pesky bug under the lights of the nearby parking lot where her teammates are waiting.

Written in script, it says, ‘I believe in good things coming.’

St-Germain, who spent two years on Golf Canada’s Development Squad and one year with Team Ontario, was named a member of the National Amateur Squad for 2017. She’s in her first of two years at Daytona State, a junior college, but has already committed to the University of Arkansas for the fall of 2018 thanks to some impressive accomplishments on the international stage.

At 16, she got those motivational words permanently etched on her arm. But since she was a minor, she had to get parental consent first.

“Grace is an old soul and I know that whatever she wants to do she has thought it out very well,” says her mom, Kathy. “I loved how it had a meaning for her life, but also for golf. We had an agreement that she had to write the quote on her arm and if after a month she still loved it, then we would go get it. The quote sums up Grace’s personality and I have to say, I love it on her.”

To this day, Kathy St-Germain is unaware of how Grace’s golf skill came to be. She says she doesn’t golf, and her husband is a casual, once-a-summer player.

St-Germain’s grandparents, however, ran the junior program at Hylands Golf Club — the host of the Mackenzie Tour-PGA Tour Canada’s National Capital Open to Support our Troops — and encouraged all their grandchildren to play.

“One of the members told us that Grace should start playing tournaments, and we were like, ‘Oh, why?’” relates Kathy with a laugh. “People said she had a nice swing, but we figured it was just something she could do for fun and it’s a sport you could play until you were 70 or 80 years old. We just had no clue.”

St-Germain says she was the only one of the grandchildren to stick with the junior golf program after she started playing at seven.

“You couldn’t play on the golf course until you were eight, so I would play around on the putting green and the driving range,” Grace recalls. “I wanted to keep getting better and better until I got to play on the big course. That got me into (golf) and motivated to play.”

St-Germain, an only child, grew up as a figure skater. She says the individualistic aspect of skating helps her now on the golf course.

“I have to put the effort in. I don’t have a team to support me. I have to do all the work on my own, and performing in front of crowds, (figure skating) helped too,” she explains. “I started figure skating when I was four, so I was used to crowds.”

Despite watching Grace grow up with sports, Kathy admits her and her husband still can’t grasp how she does what she does on the golf course.

“Even now, we’re in shock,” states Kathy. “We go out and we love watching her play so much. As long as she’s happy, there’s never been a where-will-this-take-her moment. When she won (the 2016 Ontario Women’s Amateur) we knew she could do it. Even then, we were standing around saying, ‘Oh my God, what just happened?’”

Kathy says Grace’s involvement in Golf Canada’s program has been the “best thing that’s ever happened to her” and St-Germain points to the support of Ann Carroll on the Development Squad as being important in her own growth as a golfer, calling her a “mother figure” and a “best friend.”

She’s excited, though, to move on and work with Tristan Mullally.

“The thing about Grace is that I see a lot of potential for growth,” says Mullally, head coach of Team Canada’s women’s squad. “Strategy is always a strong element of how she plays her game. There are some technical improvements that could be made but it’s awesome that she has been able to play as well and score as well, even though she can improve. She can get a lot stronger, there are a lot of positive elements that can grow.”

Being from Ottawa, St-Germain admits seeing local hero Brooke Henderson have the success she’s had so far has been motivating as well.

“I want to get there,” she says. “Seeing someone have such great success and being from (my) area is great.”

“With Brooke and all the other Canadians doing well, that opens up the gates,” adds Mullally. “It brings a familiarity of the level of play you need to be successful. It’s someone from your home country you can reach out to and look up to.”

Although St-Germain has not yet played in a professional event, she says if she was invited to or qualified for one, it would be great experience.

Through early 2017, she already has a win under her belt, as Team Canada — along with Maddie Szeryk — captured the team title at the 2017 Mexican Amateur (she finished third in the individual portion).

So while the sun sets on another day of practice for Grace St-Germain, jumping in her teammates’ car and home in time for some homework and dinner, it will rise again tomorrow as she continues to chase her dream.

Another day to believe in good things coming.