Goosen hangs on to take one-shot lead at Riviera 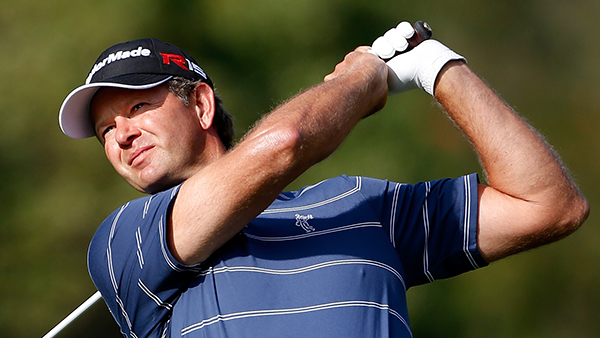 LOS ANGELES – Retief Goosen handled the tough conditions at Riviera so well on Friday that it brought back some fond memories.

Sure, he’s a two-time U.S. Open champion, and the Northern Trust Open drew some comparisons to golf’s toughest test with its firm, fast conditions. For now, Goosen was just thrilled to be in the lead going into the weekend at any tournament.

Goosen rolled in a 30-foot birdie putt on his final hole for a 1-under 70 and his first 36-hole lead in more than four years.

“It’s been such a long time since I’ve last been in contention,” Goosen said. “Who knows how my game is going to hold up? But I’m feeling good. My back is feeling great. So if the nerves can hold, just continue to make good golf swings and make a few good putts, who knows?”

He was one shot ahead of Ryan Moore (68), Graham DeLaet (67) and Justin Thomas, the 21-year-old rookie who already has been in the weekend hunt twice this year. Thomas made three crucial par saves on his final nine holes for a 69.

It’s easy to mention U.S. Open when the scores are high, especially on a course that once hosted one. But there was nothing easy about Riviera. Goosen was at 6-under 136, the highest 36-hole score to lead on the PGA Tour since the Quicken Loans National at Congressional, another U.S. Open venue.

“It’s playing similar to a major championship,” said Jordan Spieth, who had a 70 and was three shots behind. “And the rough … there’s really no rough. That’s what is great about this place. It only takes a couple days for them to make it like a major, and they don’t even have to do much.”

Goosen, who turned 46 earlier this month and hasn’t won in six years, has plenty of work ahead of him.

Two-time major champion Angel Cabrera made two bogeys over his last three holes for a 68 and was two shots behind. Defending champion Bubba Watson (69), Spieth and J.B. Holmes (69) were in the group three shots behind.

Nick Watney became the first player all week to reach 7 under early in the second round, and he was leading when he made the turn and made birdie on the par-5 first hole. He followed with four straight bogeys and shot 74, though he was still in range. Watney was in the large group at 2-under 140 that included Sergio Garcia (69), Vijay Singh (74) and Carlos Ortiz (73).

“If it continues to be like this, it’s only going to get tougher,” Goosen said. “There’s going to be some tougher pins out there, and par will be a good score on a lot of these holes. … The rough is thick in places. The greens are definitely becoming U.S. Open greens.”

The rough isn’t severe, but it doesn’t have to be. The greens are so firm that it’s difficult to get it close. Goosen had a sand wedge into the seventh green and it rolled out some 35 feet.

“It’s just tough to have birdie chances that are reasonable on this golf course right now,” Moore said. “The greens are so firm and so bouncy. I hit a handful of what I would say are as good of shots as I could possibly hit the last couple days and ended up with 45-footers.”

Watson was moving closer to the lead with a 40-foot eagle on No. 1 (he started at No. 10) and a 25-foot birdie on the next hole. But he hit a wayward tee on the third that led to bogey, and finished with six straight pars.

“I haven’t been able to get the ball as close as I want to,” Watson said. “I made two long putts, which me look like I played really good today.”

DeLaet and Thomas each saved their rounds with pars.

DeLaet, who rolled in a 40-foot birdie putt from the fringe on No. 4, had par putts of 10, 7, 6 and 5 feet the rest of the front nine for a solid round with just one bogey. Thomas saved par from the bunker in the middle of the green on the par-3 sixth hole and made an 8-foot par save on the next hole. He also made a 10-foot par putt on the long par-3 fourth hole.

“I felt like they were (worth) more than the birdie putts,” Thomas said. “To leave it in the spots I did and get up-and-down for par was huge.”

Goosen won his U.S. Opens at Southern Hills in a playoff and at Shinnecock Hills with his short game, particularly the putter. This only reminded him of a U.S. Open the way he had to fight for every score.

Adam Hadwin of Moose Jaw, Sask. was even on the day and sits T48 at 2-over. Winnipeg’s Nick Taylor and David Hearn of Brantford, Ont. did not make the cut.

DIVOTS: Mike Weir withdrew on his front nine with soreness in his right elbow. He said he would see a doctor and likely not be ready for the Honda Classic. … Lucas Glover made a hole-in-one on the par-3 sixth hole, a tap-in birdie on the par-3 16th and 10-foot birdie on the par-3 fourth, the second-hardest hole at Riviera on Friday. He also had five bogeys, however, and missed the cut by one. … The cut was at 3-over 145. Fred Couples missed a 6-foot par putt on the 18th hole and missed it by one shot.