Goosen keeps the lead at Riviera 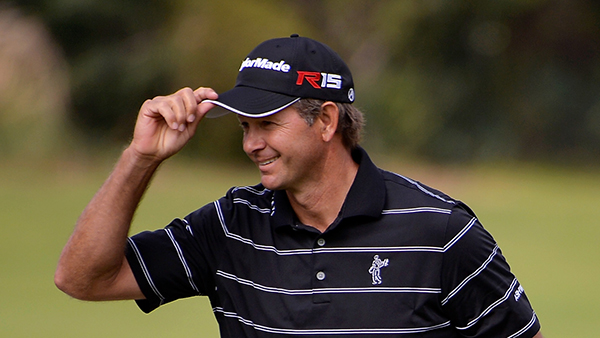 LOS ANGELES – Retief Goosen had gone so long without being in contention on the weekend that he wondered how his nerves would hold up. They were tested Saturday at Riviera, and the two-time U.S. Open champion earned a passing grade.

Even though he made only two pars on the back nine, and twice faced tough putts just to save bogey, Goosen never lost the lead. He finished with a chip-in for birdie, reached the par-5 17th in two for another birdie and had a 2-under 69 to build a two-shot lead in the Northern Trust Open.

“It wasn’t easy out there for me,” Goosen said. “Mentally, I had to work hard to try and stay positive and focused. But I’m still in the lead, so that’s a good place to be. Just try and play solid tomorrow and keep the putter warm and see what happens.”

Sunday is the final exam.

The South African is 46 and coming up on the six-year anniversary of his last win. He was two shots ahead of Graham DeLaet of Canada, who had a 70, with a host of contenders within four shots – Sergio Garcia, Dustin Johnson, Jim Furyk, Jordan Spieth, Angel Cabrera, defending champion Bubba Watson, and even Vijay Singh, who turns 52 on Sunday.

Gooden had disk replacement surgery in 2012 when protein injections didn’t work, and feared his career might be over. Now he has a second chance.

“This would be an awesome win,” Goosen said. “It’s been awhile since I had a chance to win. Yeah, this would … feel like a U.S. Open, a third U.S. Open, for me winning this week. I’m going to give it my all tomorrow and fight hard and we’ll see what happens.”

DeLaet caught Goosen with an eagle on the opening hole, fell back with consecutive bogeys and did his best to stay close. He will be in the final group with Goosen and Bae Sang-Moon, who matched the best score of the week with a 66 and was three shots behind. DeLaet, going for his first win, thinks that might help being with Goosen.

“He’s a great guy to play with, especially under pressure circumstances, because you can just kind of look at him and see how cool and collected he is with that silky-smooth bomb that he hits off the tee,” DeLaet said. “I’m a little bit more of an emotional player than that, but I’ve learned over the years to not get too amped up or too down low. I think playing with him is a good way to just keep the calm and just go about business.”

Bae was in a large group at 5-under 208 that include Garcia, whose remarkable par on the 13th hole was set up by a 3-iron from a bunker behind the 10th green.

Ryan Moore, whose tee shot on the 286-yard 10th hole rolled over the cup and off the green, was preparing for a long putt up the slope when Garcia’s tee shot on No. 13 landed with a thud behind him and went into a bunker.

“I didn’t know anybody was on the 10th hole,” Garcia said. “I mean, I didn’t even know where my ball was going.”

The trick was figuring out where to go next. The TV towers on the 10th hole blocked his view to the green, but because he was in a bunker, his only relief was against the back lip. Garcia grabbed a 3-iron and drilled it through a tiny gap in the eucalyptus trees, just short of the green. His chip came up 25 feet short, and he made it for par.

Garcia birdied only the 17th on the back nine and shot 68, putting him in contention in his first U.S. tournament of the year.

Carlos Ortiz of Mexico also had a 68 and will play with Garcia, one of his mentors on tour. J.B. Holmes shot a 69 and joined them at 208.

Also in that group was Moore, who started the round one shot behind and shot a 72.

Moore’s drive on the 10th was close to perfect and ran over the back of the cup. It was an inch away from hitting the flag and possibly dropping for a hole-in-one, but the cup didn’t slow it enough to keep from running off the back of the green. He wound up with a par.

Then, Moore’s tee shot on the par-3 16th hit the flag and caromed off the green. He made that one from the fringe for a birdie. Even so, he was among 13 players within four shots of the lead.

It’s up for grabs, and it starts with Goosen, who says the back surgery gave him a “second life” on tour. Now it’s about what’s between the ears.

“My back is feeling great. I have zero back pain,” he said. “I wish I was 10 years younger, but I feel like I can swing the club again. I just need to control my nerves a little bit.”

Canadian Adam Hadwin is tied for 39th place at 2-over.

DIVOTS: Justin Thomas, one shot out of the lead going into the third round, hit his opening tee shot out-of-bounds for a bogey, and then hit a tee shot on No. 6 that bounced off a tree, off a concession tent and into knee-high grass. He chose to go back to the tee to take triple bogey out of the picture, but then landed on the wrong side of the bunker in the middle of the green and took triple bogey. He shot 75 and was seven shots behind. … The scores on the 286-yard 10th hole ranged from an eagle (Brendan Steele) to a triple bogey (Brandt Snedeker). It was the first time the hole played under par all week with the front left pin.