Gord Percy named 49th President of the PGA of Canada 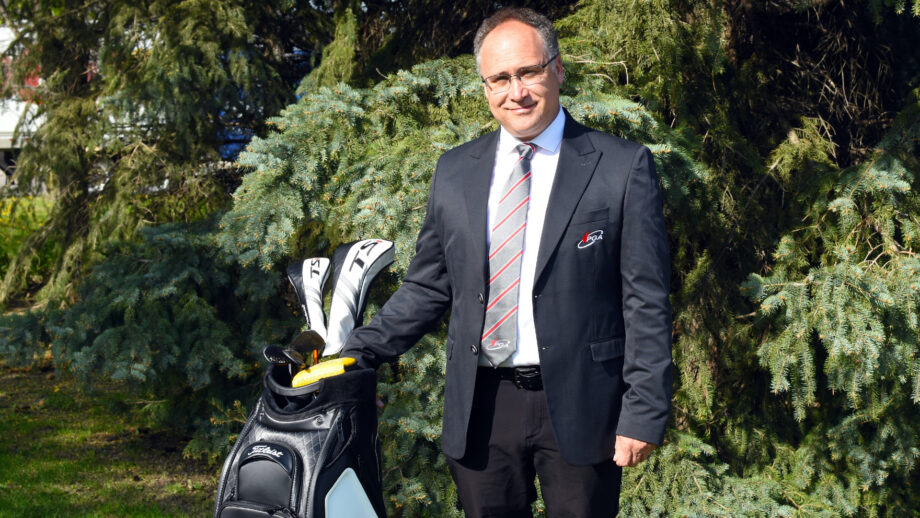 An introduction from his daughter, Paige Percy

Today, Gord Percy was named the 49th president of the PGA of Canada at the association’s Annual General Meeting. The PGA of Canada, first established in 1911 is the second oldest and third largest professional golf association in the world.

Percy is an esteemed community member, golf professional, and golf industry leader. I would also say he is the best father in the world. He once said in an article about his career that his primary motivation is his children, so it feels only fitting that his daughter is the one to introduce him as the new President of the PGA of Canada.

I was lucky enough to work for my dad for many years at Carleton Golf and Yacht Club as a back shop and pro shop employee (since then, my dad has moved to become the Head Professional and General Manager at Smiths Falls Golf Club).

One of my favourite parts of working for him was our drives to and from work. Sometimes during those drives, we would listen to the news or music, but more often than not we would talk about golf – not just about how he was playing, but about growing the game, changes in the industry, and memories over his lifetime. These conversations brought up industry challenges, dreams of what golf could be in the future, and a lot of nostalgia.

My favourite stories my dad tells are often about his adventures and experiences as a young golfer in his hometown of Verona, Ontario. He was first introduced to golf, not at a course, but at home, by his babysitter while his parents were at work. He transitioned from playing golf around the house to Rivendell Golf Course (although he certainly still plays a lot of golf around the house, even today).

He still holds the course record of an 11-under par, 60 at Rivendell!

Growing up, I often heard stories about him giving golf lessons to senior members, setting course records, and making shots he sometimes still considers his best.

Although an injury changed his career trajectory, he still aspired to work in the golf industry and ended up getting a Bachelor of Arts and a Bachelor of Physical and Health Education from Queens University and a Professional Golf Management Graduate Certificate from Humber College.

His ability to change direction, persevere and still follow his passions are the same qualities he has instilled in my brother and me. He has always emphasized the importance of pursuing education, whether formal or informal, which the PGA of Canada has further supported through their Ian Webb scholarship program for members’ spouses, children, and grandchildren.

At home and at work, supporting education and professional development is a top priority for my dad.

“I think the big things for me are finding ways to get pros into jobs where they can have successful careers and can stay with it,” he says. “You used to hear stories about pros working a ton, not making a lot of money, and not having that work-life balance. I think we’re moving in the right direction but there is still some work to do. The education, continuing being innovative with it, and getting more people interested and using that platform – that is all very important to me.”

It’s clear that growing the game of golf has always been a passion for my dad. This is particularly evident when he runs junior golf camps or gives junior lessons. During these camps I got to watch so many young people become passionate about golf through his teaching. His ability to inspire and teach is a talent he’s had since the beginning of his career.

I’m so proud that to him growing the game isn’t just about getting more people to play. Rather, it is about making sure that as the game of golf grows in an inclusive way. Whether it is attending events for military veterans golfing, working with organizations to provide youth memberships, or prioritizing growing the game for women, he works to make sure golf grows inclusively.

He was instrumental in having Brooke and Brittney Henderson both join the PGA of Canada and is proud he was part of naming our Female Player of the Year award after Brooke.  Having known the family since his early days of being a professional he is proud to have fit Brittney for her first set of Ping Clubs that would later become Brooke’s.  Brooke went on to use an old 46 inch extra stiff driver with his name imprinted on it that she had much amateur success with.  He jokes its his fault she chokes up on her clubs.

The PGA of Canada has also taken this up through their Diversity, Equity, and Inclusion Task Force, which he was involved with and personally invested in. This extends his commitment to making sure that golf takes care of its professionals. He says priority for him going into his presidency is ensuring golf professionals across Canada have access to support, such as through the Members Assistance Program, the mentorship program, and the Benevolent Fund.

“Another thing that really is important to me; I’d like to find a way to help our members more – in sync with the Benevolent Fund – whether it is getting them more benefits from being a golf professional, or more value added so that we can help everybody out,” he says.

Over the last several years, it’s been so exciting to watch my dad take on his board leadership roles, first with the PGA of Ottawa, and most recently with the PGA of Canada. I’ve seen him work with people across the country and globally, making sure the golf industry is not only innovative, but fun. I most recently witnessed this during the 2021 RBC PGA Scramble, which brought professional and amateur golfers from across Canada together in Cape Breton. The event highlighted how golf experiences can change people’s lives and bring people together, something my dad truly appreciates and emphasizes in his work.

The 2021 season marked his 25th season as a PGA professional. During his career he has won numerous tournaments and has received accolades such as Ottawa Zone Teacher of the Year, Assistant of the Year, and Golf Professional of the Year. Although he has amassed many trophies and awards over the years, he always says he’s most proud of being a father. Likewise, as he becomes President of the PGA of Canada, I am still most proud along with my brother Ethan that he is our father.

The full list of Directors of the Association includes: