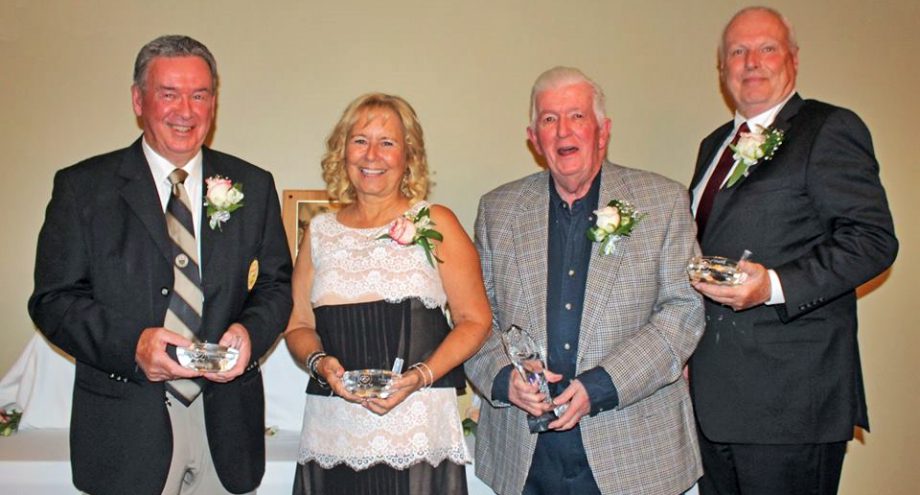 UXBRIDGE — It was a night to honour the best in Ontario golf as Golf Ontario, along with Wooden Sticks Golf Course, hosted the 16th annual Ontario Golf Hall of Fame ceremony on May 4.

The event began with emcee Mark Zecchino, from TSN, welcoming all guests who packed the reception room at Wooden Sticks in Uxbridge.

Golf Ontario President Chris Osborne took to the stage next to congratulate all of the individuals being honoured. “We acknowledge all of tonight’s inductees’ contributions and accomplishments in the great game of golf, and through this induction ceremony wish to perpetuate the memory of their place in golf history.”

First up was the Lorne Rubenstein Media Award. Presenting the award was none other than Rubenstein himself who was honoured to give the award to his peer Bill ‘Skip’ Johns. Johns, a journalist for close to 60 years, brought smiles and laugher to the crowd as he did his best “athlete” acceptance speech before thanking all who made the award possible for him.

The first inductee to be honoured was John Gordon. Gordon, a golf journalist for more than 30 years, was involved in many aspects of the golf industry. In addition to his contributions in print, radio, television and online journalism, Gordon also held roles with Golf Canada, the Ontario Golf Association (now Golf Ontario), the NGCOA and Clublink. Gordon also helped to form the Professional Golf Management Program at Georgian College and is a published author of eight books.

During his speech, Gordon spoke about his passion to make the game more accessible and affordable, but emphasized to people to have faith in the game and to stop and admire it for what it currently is.

Next, Patty Howard joined the Ontario Golf Hall of Fame. Howard was a multiple-time winner as a professional and went on to become a successful teaching pro. She held numerous positions in the industry, many of which were a first for females. Her accomplishments helped to pave the way for women in golf today.

Howard talked about her passion for the game and how it continues to burn even to this day. “People don’t remember what you did but rather how you made them feel,” said Howard. It was evident from the guests, including the coach bus of supporters that accompanied Howard, that she had made an impact on many people.

Mills took the opportunity to talk about his favorite memories with the association including his numerous trips to championships with junior teams and mischief the players would find themselves in.