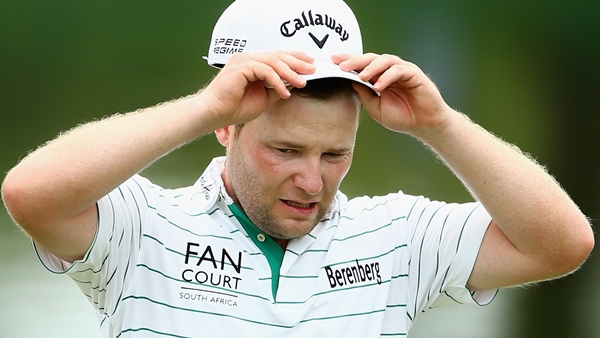 MALELANE, South Africa — Branden Grace increased his lead to five strokes after a 6-under 66 Friday in the second round of the Alfred Dunhill Championship.

The South African had three birdies on the front nine and another four after the turn at Leopard Creek Country Club to move to 16-under 128 overall.

Grace, who won all four of his European Tour titles in 2012, dropped his only shot of the competition on the par-3 fifth.

“This is a golf course that suits me and if I keep hitting everything in play the way I have been the first two days then it should be a good weekend,” Grace said. “The pins have been kind so far. I’m sure there’s going to be a couple of tricky and sticky pins out there on the weekend but I’ll just stick to the game plan and see what the next two rounds offer us.”

Francesco Molinari (65) had the low round to move into second place. The Italian had five birdies through the first 12 holes followed by an eagle at No. 13, but he missed an opportunity to cut the deficit to four strokes at No. 14 when he failed to make a three-foot putt.

“Five shots is still a very good margin, but the greens are firming up nicely so it might be slightly different over the weekend,” Molinari said. “I started 12 behind this morning and tried not to think about it. I just tried to do my best and I’m really happy with how I played.”

Tjaart van der Walt (67) is a shot behind Molinari, while Shaun Norris (67), Lucas Bjerregaard (67) and Danny Willett (69) are a further shot behind at 9 under.

Defending champion Charl Schwartzel, who is trying to become the sixth European Tour player to win the same event three years in a row, shot 70 and is 11 strokes behind Grace.