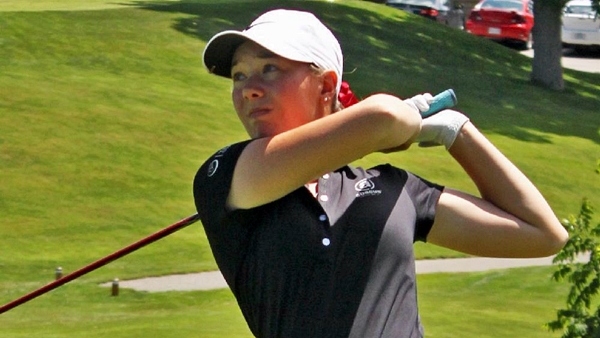 Thornhill, Ont. (Golf Canada) – Grace St-Germain fired a second consecutive 2-under 70 to grab the outright lead after the second round of the Canadian Junior Girls Championship at Thornhill Golf and Country Club. During play on Wednesday the second round was suspended due to inclement weather at 2:40 p.m. ET and resumed after a 1.5 hour delay at 4:10 p.m. ET.After the brief delay, St-Germain returned to the course and carded birdies on three of her final six holes to close with a 2-under 34 back-nine. The Ottawa native currently sits at 4-under 140 for the championship one-stroke ahead of Team Canada Development Squad member Valérie Tanguay. “I think the delay got me to calm down a bit and just regroup and I think that was good for me,” St-Germain said. “These are probably my best tournament scores in a row so far.”Tanguay of St-Hyacinthe, Que., narrowly trails St-Germain after a second-round 1-under 71, while Christina Foster of Concord, Ont. vaulted into third place after a second round 4-under 68. Foster’s second round is the lowest score of the championship and was highlighted by a back-nine 4-under 32.Nova Scotia’s Allison Chandler of Chester sits in fourth at 1-over 145 after a 1-under 71, while Michelle Kim of Surrey, B.C. sits in fifth place at 2-over 146.In the Inter-Provincial Team competition that is conducted over the first 36 holes of the championship Team Quebec and Team Ontario went to a hole-by-hole playoff after finishing the championship tied at 5-over 293. Team Quebec’s contingent of Tanguay, Ocèane Jacques of St-Gabriel de Valcartier and Annie Lacombe of Laval captured the title on the third playoff hole. The teams played the first hole continuously until a champion was decided.

In the Juvenile Division (16 and under), St-Germain continues to lead by five strokes over Chandler. Starting times, post-round results, full field list, and live scoring are available here.