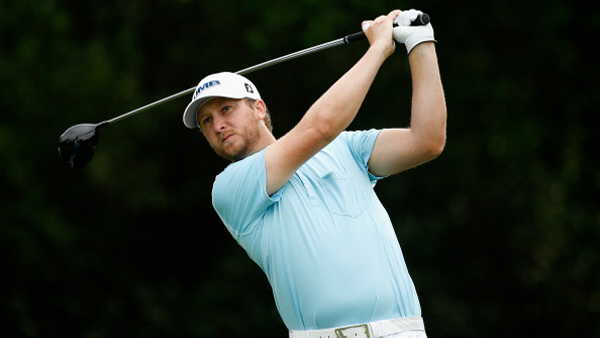 The sun continued to shine at Pheasant Glen Golf Resort in Qualicum Beach, B.C. for second round action at the CN Future Links Pacific Championship. For the second day in a row, a pair of Team Canada Development Squad members holds the lead with Grace St-Germain and Trevor Ranton alone atop their respective leaderboards.

After beginning the day in a four-way tie for third, St-Germain claimed sole possession of first on the strength of seven birdies, highlighted by a string of four straight on holes seven to 10. The Development Squad member’s second round of 1-under 71 has her at even par for the competition, two strokes clear of Euna Han, Janet Zhang and fellow Team Canada member Michelle Kim. Alisha Lau remains within striking distance, tied for fifth with Tiffany Kong at 4-over. Naomi Ko rounds out the Squad’s contingent at T17.

Ranton, who is in his first year as a member of the national Development Squad, was unable to match his first round course record of 7-under 65, but he still managed to build upon his lead. The Waterloo, Ont., native shot 3-under and now holds a six-shot advantage. A.J. Ewart, Khan Lee and Henry Lee are currently locked in a fierce battle for second place at 4-under 140, after tallying eight, seven and six second-round birdies, respectively.

Development Squad member Étienne Papineau sits just outside this group in a tie for fifth with Diego San Pedro at 2-under. The remaining national team junior boys are all positioned in the top-10; Patrick Murphy is T7, while A.J. Armstrong and Tony Gil hold shares of tenth place.

The top six competitors in the Junior Boys division will earn entry into this summer’s Canadian Junior Boys Championship. The tournament is set to be played August 3-6 at Summerlea Golf and Country Club in Vaudreuil-Dorion, Qué. Likewise, the top six Junior Girls will gain exemptions into the 2015 Canadian Junior Girls Championship, hosted at Deer Park Municipal Golf Course in Yorkton, Sask. from August 4-7.

The third and final day of competition will begin at 7:30 a.m. PT with the final group teeing off at 12:50 p.m. At the end of the day, two junior athletes will be crowned this season’s first CN Future Links champions.

For additional information and full second round results, please visit the tournament website.