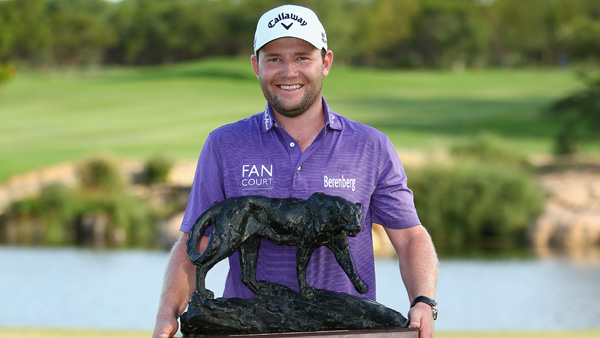 MALELANE, South Africa – Branden Grace held his nerve while others faltered Sunday, pulling away for a commanding seven-shot victory at the Alfred Dunhill Championship.

Grace started the day with a one-shot advantage over Lucas Bjerregaard, but quickly widened the gap when the Dane had a bogey on the first and Grace birdied the second.

Bjerregaard fell away badly thereafter to card a 17-over 89, while Grace finished with a 4-under 68 and a 20-under total of 268 for the event. It was the 26-year-old South African’s fifth victory on the European Tour, and he became the first person to lead after all four rounds of the Alfred Dunhill Championship.

“It’s special to win it wire-to-wire, more so because it’s in front of a local crowd,” Grace said. “It was a pretty flawless round today and the perfect way to finish off an incredible tournament – a great week in the office.”

Willett was two shots behind Grace going into the final round but only managed a 76 after finishing with a double bogey on the 16th, bogey on 17 and a triple bogey on 18. Francesco Molinari was fourth overnight but also shot a 76 to drop to a tie for sixth, 11 shots behind the winner.

Grace mixed six birdies with two bogeys and never looked threatened, finishing with a birdie on No. 18.