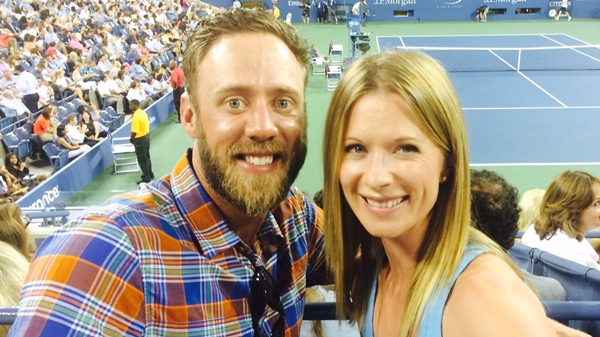 Although “love” is a term more associated with tennis than professional golf, there will be a lot of Valentine’s Day cards being exchanged this week on the PGA Tour.

While we can’t overlook wonderful long-term relationships like Jack and Barbara Nicklaus, who will celebrate their 55th wedding anniversary this year, there is a remarkable love story much closer to home for Canadians: Graham and Ruby DeLaet.

Married in 2008, the couple met when Graham, from Weyburn, Sask., was attending Boise State University in Idaho on a golf scholarship and she was working in the bank he patronized. They came face to face and it was love at first sight. Or maybe not quite?

“It was more like attraction at first sight,” recalls Ruby with a smile. “It didn’t take long, however, to know that we had something special. I think we actually told one another that we loved each other about one month in …. Graham said it first, by the way! My heart had never felt so full and that pretty much eradicated any concerns I could have had.  I know Graham was a bit concerned about his future profession and how that would affect our relationship but I reassured him it did not matter.  I would rather miss someone I loved than not love anyone at all.”

That resolve must have been tested during the early days of their marriage when Graham was paying his dues on lower-echelon circuits such as PGA Tour Canada, travelling from stop to stop alone. “I went to only three events in the three years he was out there, but when he received his PGA Tour status, it felt like a dream come true and it still does.”

Now the couple travel together and despite the occasional hiccup of lost luggage and missed flight connections, they continue to live that dream. “At the end of the day, we are together, happy and healthy, and that’s all that matters.”

And lest you think Ruby categorizes herself as a “golf widow,” be prepared to be sternly corrected. “That term is over-used and annoying!” she exclaims. “You avoid being a golf widow by simply not accepting to be one.  If a spouse really doesn’t see her husband enough that she feels like a ‘widow,’ then something needs to change.  I have my own work and hobbies, such as getting our foundation off the ground, to keep me busy.”

She is referring to the Graham and Ruby DeLaet Foundation. Founded last year, the foundation’s central focus is on improving children’s health and wellness as well as developing junior golfers in Saskatchewan, extending the couple’s commitment to “health and happiness,” not just for themselves but for others less fortunate.

“Graham and I have a lot of fun when we can work on something as a team.  Being able to provide funds and services to those in need is so rewarding.  Establishing the foundation provides a platform for us to get the word out and build recognition for charities near to our heart.  The fact that we get to do it together is icing on the cake.”

And while they haven’t been able to spend a lot of Valentine’s Days together, there is one that stands out, although not for the reason you may expect.

“The first year we started dating, Graham had been traveling for a college golf tournament and got home on Valentine’s Day.  I had made a calendar for him of pictures of us and was so excited to give it to him! He flew in really late and, by the time he got home, he was so tired he couldn’t even stay awake to look through it.”

So, despite that, if you’re looking for some romantic inspiration this Valentine’s Day, you need look no further than Graham and Ruby DeLaet, whose love for each other is not only demonstrated day in and day out, but envelopes many others through their foundation.