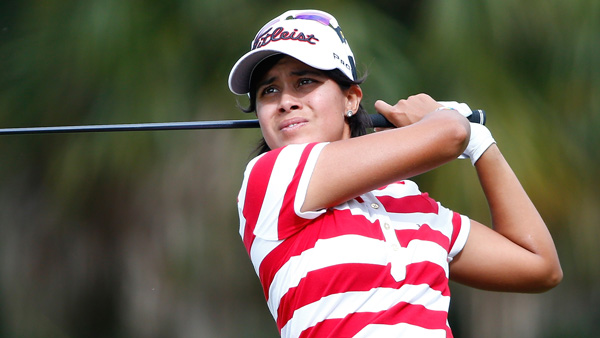 NAPLES, Fla. — Julieta Granada kept in front of a growing pack of challengers Saturday with a 2-under 70 and a one-shot lead in the CME Globe Tour Championship, only one part of what was shaping up as a tense conclusion to the LPGA Tour season.

The race for $1 million was even tighter.

Granada’s long two-putt for par on the 18th hole at Tiburon Golf Club gave her a one-shot lead over Morgan Pressel and Carlota Ciganda of Spain, who both made big putts on the final hole. Pressel hit a 7-iron to 5 feet for birdie and a 70, while Ciganda rolled in an 8-foot par putt for a 71.

Sandra Gal of Germany (70) hit into the water for bogey on the 18th and was two shots behind.

None of the top four can win the Race to CME Globe and its $1 million bonus, the biggest payoff in women’s golf.

All that commotion is right behind them.

Stacy Lewis, who effectively wrapped up LPGA player of the year and the Vare Trophy when Inbee Park faltered, made only one mistake in her round of 70. It moved her into a tie for 10th, six shots out of the lead but enough to give her a slight edge in the points race for the $1 million.

Lydia Ko (68) and So Yeon Ryu (70) were tied for fifth, three shots behind. Both are very much in the running for the bonus, especially Ko, who only has to win the tournament. Also still in the mix was Michelle Wie, who survived an up-and-down day for a 72 and was only four shots behind.

All of it will be settled over 18 holes on Sunday, and there’s even a chance for a playoff to decide who gets the winner-take-all bonus.

“I still have a chance – I’m not out of it,” Wie said. “That’s all I can ask for. I’m excited for the opportunity tomorrow, and we’ll see what happens. I’m just going to play as hard as I can and see what I can do.”

Lewis hit every fairway and missed only two greens. She was poised to move closer to the leaders until her approach on the par-5 17th failed to the right and into a hazard, leading to a bogey on the easiest of the par 5s at Tiburon.

Even so, she scored well enough to be in the top 10, not far from the other three players vying for the $1 million.

“I don’t know exactly how it all works, but there are people on the leaderboard I’m definitely cheering for over others,” Lewis said, honest as ever. “I’ve been thinking about all these awards and the Race to the Globe for three, four weeks now. Unfortunately, that’s not going to go away overnight.”

Her only goal Sunday was to hit greens and try to make putts, move up the leaderboard and hold out hope for a big rally to win the tournament.

“That’s what I did today and it really seemed to help me stay focused on the shot at hand,” she said.

Ko, the 17-year-old rookie, made the biggest move. She is No. 3 in the standings, meaning a victory Sunday would guarantee the $1 million bonus (along with $500,000 for winning the tournament). She took on more than she intended with a 6-iron that flirted with trouble left of the 18th green. Instead, it took a hop to the right and settled 3 feet away for a birdie.

“I come to the press room or get asked by the media, and that’s when I go, `Oh, there’s is $1 million on the line.’ When I’m out there, I’m trying to make as many birdies as I can,” Ko said. “I think that’s actually keeping me a little distracted.”

Wie is No. 4 and Ryu is No. 5 in the standings, meaning they need to finish strong and have Ko and Lewis lose some ground to have any chance.

But it’s all right there for any four of them on Sunday.

Granada was the first instant millionaire in LPGA history when she won a winner-take-all format at the ADT Championship eight years ago, her only LPGA victory. At stake is a chance for her to go wire-to-wire for another big prize.

Pressel has gone six years without a win, and that’s all that matters to her. The Tour Championship is all she can win, and Pressel isn’t even up to speed on anything else.

“Someone is going to win $1 million, and it’s not going to be me,” Pressel said. “But there’s other things I can win.”