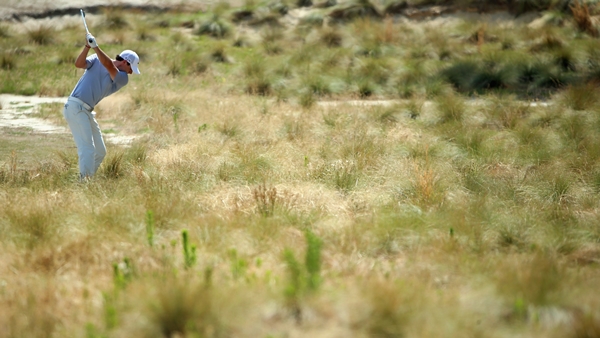 In his book, A Feel For The Game, Ben Crenshaw says, “If Dr. MacKenzie [famed course architect Alister] or Donald Ross or any of the other great architects came back now, I wonder what they would think of … what has been done to their courses. I never knew them, but I’ve studied their lives, their courses and their thoughts on the game.  I think they would take a dim view of it.”

A dim view is exactly what many TV viewers may be taking over the next two weeks as the men’s and women’s U.S. Opens are contested on Pinehurst No. 2, a course that little resembles the one we last saw in 2005. Shades of brown and yellow are interspersed among the green of the hard and (hopefully) dry fairways. Clumps of native grasses punctuate the sprawling sandy waste areas. All that remains intact from 2005 are Donald Ross’s famed and feared domed greens and the closely mown collection areas surrounding them.

Thanks to Crenshaw and design co-conspirator Bill Coore, gone are the wall-to-wall green carpets that masqueraded as fairways and the lush grass roughs that the USGA delighted in growing shin-deep to punish wayward shots. Good for them and golf. Maybe not so good for the uneducated golf fans who think every course should be pristinely green. Pity them, as they are unwitting victims of the “Augusta Syndrome.”

When MacKenzie and Bobby Jones designed Augusta National, permanent site of The Masters, their stated aim was to create an “inland links.” Over the past 80 years or so, Augusta has morphed into something diametrically opposed to that. It does not offer a player multiple options but dictates the line of play; it does not offer a chance to play the linksy “ground game” where long-iron shots can be “stung” down fairways for many more yards than usual; it is groomed and coddled to the nth degree and resembles nothing else in nature. It is contrived, not natural. But it looks great on TV and, as a result, many golfers not only expect that unrelenting green on their screens but also on the courses they play. The result of the Augusta Syndrome has been a massive increase in every sort of input to sustain that unnatural image: Fertilizer, herbicides, pesticides, water, manpower, you name it.

Over the years, Pinehurst No. 2 suffered the same unfortunate metamorphosis as Augusta. But someone saw the light and, as Pinehurst President Don Padgett II put it in announcing that Coore and Crenshaw Inc. would be renovating the course: “We are doing this because it is the right thing to do as stewards of this historic course.”

“We’re trying to uncover it, not recover it,” said Coore at the start of the project in 2010. “We’ll bring the strategy back and reinstate its character.” He and Crenshaw spent countless hours studying Ross’s original plans and notes as well as historic photos before commencing the controversial task of recreating a true inland links.

They have succeeded admirably.  The fairways are wider, skirting around those yawning  sandy waste areas, yet 26 acres of turf were removed; the area of maintained rough was reduced some 40 per cent; and single-row irrigation replaced the existing double-row system, reducing the number of sprinkler heads from 1,150 to 450. “We want the grassing lines to be defined by the limit of the irrigation system,” said Bob Farren, Pinehurst’s director of golf course management.

If you can get over the aesthetic contrast (shocking to most North American viewers used to pampered and homogenized PGA Tour venues), then you can appreciate what has been achieved by Crenshaw and Coore in “uncovering” Ross’s masterpiece. Although the green complexes are uniquely Rossian (he once said that they “make possible an infinite variety of nasty short shots that no other form of hazard can call for”), the hard, fast and eminently playable turf is definitely reminiscent of a links. The fact that the sandy areas and sinuous fairways provide shotmaking options was undeniable in the players’ news conferences leading up to the men’s U.S. Open. For example, Bubba Watson said he would lay up on many holes while Phil Mickelson said he would pull the driver out as often as possible.

If you are a golfer of a certain age, you may recall when you played a hole with a driver and 5-iron in the wet spring, 4-iron and a wedge in the dryness of summer, and something else all together in the fall. The rough was wispy and unpredictable. It was a time when creativity and imagination defined a good golf game, not the unrelenting similarity of lush fairways sustained uniformly throughout the season by wall-to-wall irrigation and chemical inputs.

Thanks to the visionary leadership at Pinehurst and the genius of Crenshaw and Coore, we will see a hint of that during the men’s and women’s U.S. Opens over the next couple of weeks. It might not be green, but it is better. Better for golf and better for the environment…so I guess it is “green” after all.