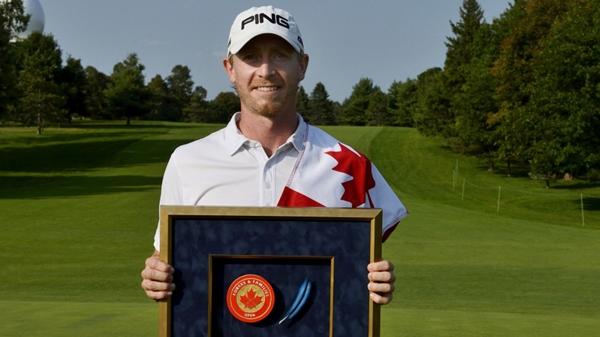 OTTAWA – With a dramatic 70-foot birdie putt and a final round 9-under 62, Summerland, B.C.’s Greg Machtaler captured the inaugural FORCES & FAMILIES OPEN on Sunday, becoming the first Canadian winner on PGA TOUR Canada in 2014.

The 30-year old made a brilliant charge up the leaderboard on Sunday, playing his final 11 holes in 9-under par, a run that included two eagles and a back nine 30. After finding the green at the 72nd hole, Machtaler rolled in a long birdie putt to post the clubhouse lead at 17-under, then watched as neither American Jeff Dennis or Baddeck, N.S.’s Peter Campbell could match him with a birdie at the last.

When 54-hole leader Greg Eason of England couldn’t hole out for eagle to force a playoff, Machtaler was officially the champion, becoming the first Canadian to win since Max Gilbert at the 2013 TOUR Championship of Canada presented by Freedom 55 Financial.

The win comes just under a year after Machtaler’s father Glenn passed away, a decision that spurred the 2007-2011 PGA TOUR Canada member to resume his chase for success on TOUR.

“It’s been hard,” added the Brigham Young University alumnus. “Emotionally, you think about him all the time. You’re sad and you go through some moments where you wish you could see him one more time. To be able to win this for him, it kinds of makes a really tough situation just a little bit easier to deal with.”

Machtaler made 13 cuts in 24 starts from 2007-2011, then turned to work at Summerland Golf Club just east of Vancouver after playing just three times in 2011. A breakout season on the PGA of Canada circuit in 2013, however, where he won four times including the prestigious Canada Cup, led him to consider re-starting his TOUR career, a decision that payed off with his first PGA TOUR Canada win on Sunday.”

“I was very hesitant still,” Machtaler said of returning to playing on PGA TOUR Canada, where he earned status at the 2014 British Columbia Qualifying Tournament. “I had a good job for a couple of years, and you have that steady paycheck coming in and you still get to play some tournaments and I had some success. To come out here against these guys, they’re all so good, and you can’t play poorly. You can play good and miss a cut out here.”

The 2014 season had been a trying one until Sunday for Machtaler, who had been dealing with a back injury that had limited his ability to swing the club effectively. After ongoing treatment, the 30-year old said he finally a return to form was in the cards this week.

“I thought I was going to have to write off the year,” said Machtaler. “My back was just so bad, I couldn’t even swing. I just have to thank all the physio teams that I’ve worked with back home and on the road with PGA TOUR Canada. They’ve really helped me. It got the point where I could finally stop thinking about it and I could finally just let my swing go again.”

Machtaler teed off 1 hour and 40 minutes before the final group of Englishmen Greg Eason and Kelvin Day, and after holing his long birdie putt at 18, had to wait and see if he would be the champion. When Eason, who led after each of the first three rounds, couldn’t hole his approach from the right rough, the champion was crowned.

“It’s huge. It’s been a really, really tough year personally with trying to get over the loss of my dad so unexpectedly,” said Machtaler. “He would have wanted me to do it for sure, and that was the deciding factor, doing it for him.”

The win moves Machtaler to 9th on the Order of Merit with four events to go. Machtaler said the win changes his outlook on the remainder of his season and career as he aims to make the next step on the path to the PGA Tour.

“Every player is just so good, so to be able to top a field of that many good players really gives me a lot of confidence and shows me that all the hard work’s been paying off,” Machtaler said. “I think I’m making the right decision to come back and play again.”

In addition to his win on Sunday, Greg Machtaler claimed Freedom 55 Financial Canadian Player of the Week honours along with a $1,500 prize.