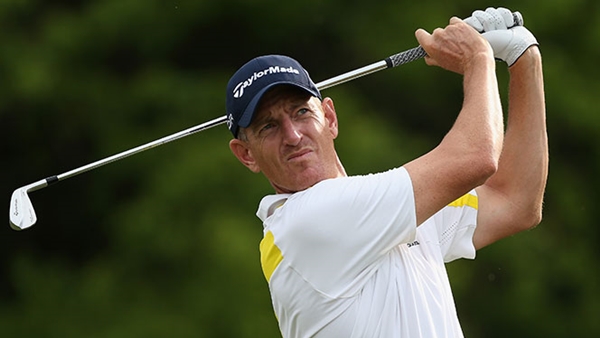 NEWBURGH, Ind. – England’s Greg Owen won the United Leasing Championship on Sunday for his first Web.com Tour title, overcoming a seven-stroke deficit with a 5-under 67 for a one-stroke victory.

“It’s just a crazy game,” Owen said. “I’m delighted. This was unexpected. … It’s been a long time. I’ve had back surgery and changed continents. You always wonder where you are and how to compete these days. The game kicks you in the teeth so many times. If I could do anything else I wouldn’t be playing this game. It’s a tough sport but only one of 156 can do this each week so it feels very special to be holding this trophy.”

Playing more than an hour ahead of the final groups, Owen opened with a triple bogey, birdied Nos. 6 and 7, and played the first eight holes on the back nine in 7 under – making five birdies and an eagle – before closing with a bogey.

“I got off to the worst start I’ve ever had on a golf course and I was thinking it was going to be a very long day at that point,” Owen. “I was pretty low and thought that if I could get back to even par for the day I’d be doing pretty good. I could have easily given up and shot 80, but that’s not me and that’s not how I was brought up. I was proud of myself for hanging in there.”

Ryan Armour and third-round leader Mark Hubbard tied for second. Armour finished with a 68, and Hubbard had a 75.