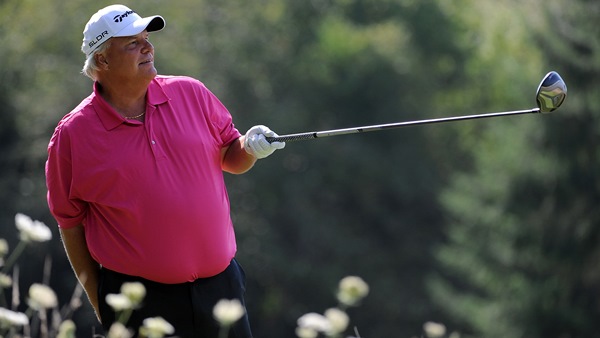 CARY, N.C. – Guy Boros birdied the final hole Friday for a 6-under 66 and a one-stroke lead over Tom Lehman and Marco Dawson after the first round of the Champions Tour’s SAS Championship.

Boros, the son of late Hall of Famer Julius Boros, turned 50 on Sept. 4 and is playing in his second event on the tour. He won the PGA Tour’s 1996 Greater Vancouver Open.

“The most important thing my dad taught me was to have a good time,” Boros said. “If you’re not enjoying something it’s tough. But he absolutely loved the game. I wish it would have rubbed off on me a little more, but I do enjoy playing. I like it very much.

“I putted good in the qualifier on Monday, and I switch putters every other week it seems like. Hopefully, I’ll keep putting well and I’ll stick with this one quite a while.”

Lehman said the course was set up well for aggressive golf.

Dawson also was optimistic after his start.

Hale Irwin, the 69-year-old star who won the 2005 tournament at Prestonwood, opened with a 68 – the seventh time he has bettered his age this year. He had six birdies and a double bogey on No. 8.

“I played OK,” Irwin said. “When you look at my score today and when you look at (playing partner) Tom (Lehman’s) score and how he’s playing and there’s got to be more than one-stroke difference – he played very well and could have scored lower than that. I’m not happy with the way it ended, but all in all I played well today.”

Defending champion Russ Cochran had a 72.

Langer has a tour-high five victories – two of them majors – and leads the money list and Charles Schwab Cup points race. Montgomerie has two major victories this year and is second in the Schwab Cup standings.

Tom Byrum had a hole-in-one on the island-green eighth in a 76.

Stephen Ames is the top Canauck thru 18 holes. He opened with a 1-over 73. Rod Spittle carded a 75 Friday, while Jim Rutledge had a 78.