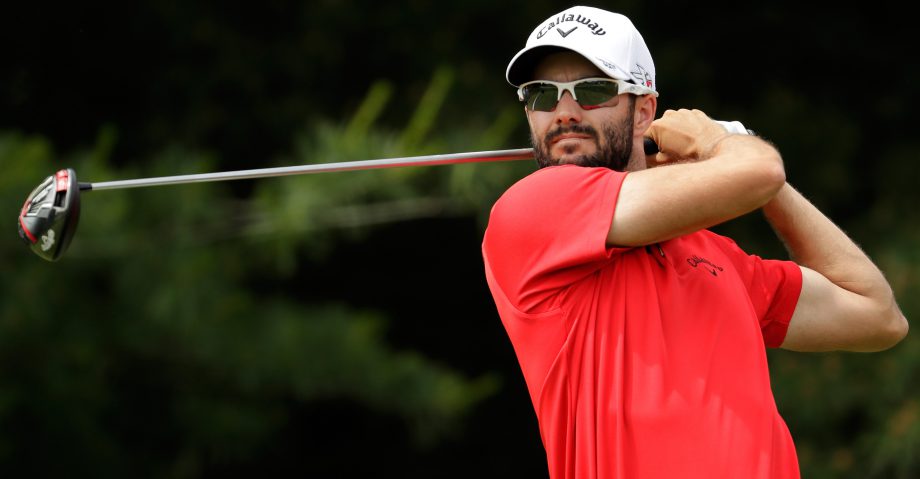 DUBLIN, Ohio – Two matches at home against Phil Mickelson made Brendan Steele feel inadequate. Two rounds at the Memorial gave him a share of the lead.

Steele put in a little more work and it paid off over two days in soft conditions at Muirfield Village. He had a 5-under 67 on Friday and was tied for the lead with past Memorial champion Matt Kuchar (66) going into a wide-open weekend.

Steele, whose only PGA Tour victory was in his rookie season five years ago, took the last two weeks off to attend a wedding, go fishing with his father and venture over to San Diego to play a few games with Mickelson at The Bridges at Rancho Santa Fe.

“He just drummed around for a couple days, so I knew that I needed to really work hard on my game when I got here,” Steele said.

The mathematical definition of getting drummed turned out to be 2 and 1 on the first day, 5 and 4 on the second day.

“But the second day, he shot 10 under, I just felt like my game was very inferior to his,” Steele said.

He made a quick fix with swing coach Rick Smith, had time for a few more tweaks, and he took that straight to the course for solid play over the last two days. And while there was nothing at stake, he has Mickelson by five shots at the moment.

Mickelson gets credit for a tip.

“I think it’s hard in an off week to find out where your game is at unless you play against some good competition,” Mickelson said. “It identified the area that he needed to work on. He called up Rick, he came out and worked on it, and now here’s the result. That was kind of the benefit.”

As for the description of Mickelson “drumming” Steele?

“I use a little more flamboyant term, but that’s fine. You can use that,” he said.

Steele and Kuchar were at 12-under 132, the same score that led a year ago.

The scoring was so good, however, that the cut was at 2-under 142, the lowest since Jack Nicklaus started this tournament in 1976.

Jordan Spieth for a brief moment looked as though he might be on the wrong side of it when he opened with two bogeys in four holes. He made six birdies over his last 12 holes for a 68 to at least stay in range, six shots behind at the halfway point.

“The more you think about the cut line, the easier it is to hang around the cut line,” Spieth said. “I looked up at the board when I was at even and I thought, ‘You know, I’m 12 back. That’s a lot. How can we do our best just to do a little dent in it and maybe make some magic happen after that?'”

Rory McIlroy was mildly disappointed with his 66, but only because he played the last seven holes in even par.

Jason Day was thrilled with a 71 because he lost his swing and figured it should have been something in the upper 70s.

All of them are still in the chase, and they have plenty of company.

Emiliano Grillo of Argentina, who won his first PGA Tour event as a member at the Frys.com Open, feasted on the fast greens for a 66 and was one shot behind with Gary Woodland, who has quietly gone about rounds of 68-65. That included a shot into 3 feet for eagle on the par-5 15th.

Dustin Johnson, who opened with a 64, never caught the morning leaders. He had a pair of bogeys on the back nine that slowed him, and he took a double bogey on the par-4 sixth hole. It led to a 71, though he was only three shots behind.

Adam Hadwin of Abbotsford, B.C., shot a 6-under 66 to climb into a three-way tie for 9th. Brantford, Ont., native David Hearn is tied for 32nd.

Kuchar also got a tip from Mickelson – a tip of the cap, anyway – when he got up-and-down with a flop shot on his final hole at No. 9 for a share of the lead. Dating to his 68 in the final round of The Players Championship, Kuchar has shot in the 60s in 10 of his last 11 rounds.

“I feel like I’ve put it all together,” Kuchar said. “The tough thing and the great thing about golf is there’s so many facets of the game, so many pieces, that need to come together for you to play well. It seems like some weeks the putter is hot but the driver’s not. If you get them all clicking, it’s great. And it feels like everything’s coming along on good form now.”