Hadwin opens with even-par round at Kapalua 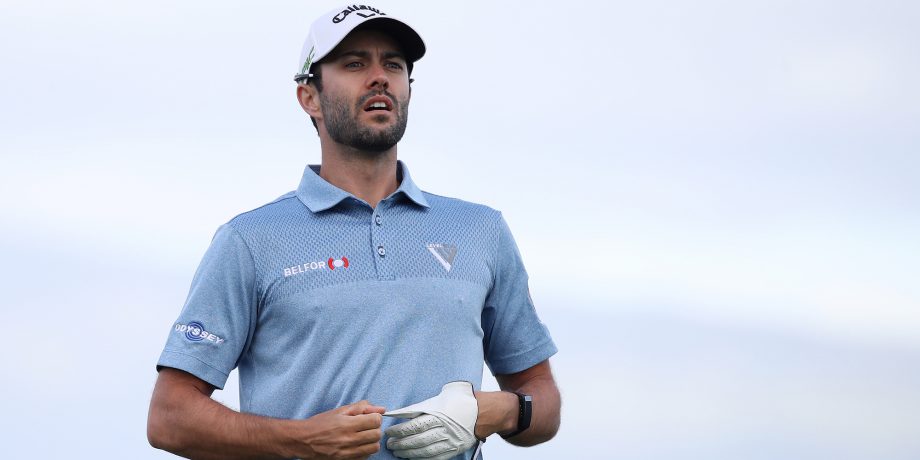 KAPALUA, Hawaii – Marc Leishman is having a much better time at Kapalua this year, on and off the golf course.

Leishman, coming off his best year with two PGA Tour victories that helped him become the highest-ranked player from Australia, made eight birdies in a strong wind Thursday on the Plantation Course for a 6-under 67 and a one-shot lead over Brian Harman and Jhonattan Vegas.

Only six players broke 70 in the opening round, a product of trade winds strong enough to cause players to back off putts.

There were a few other wild moments. Leishman thought he hit his tee shot out-of-bounds on the 14th hole, where the wind sent it sailing beyond the waist-high native grass. Just his luck, he wound up in someone’s backyard, and it wasn’t out-of-bounds. What he figured would be a double bogey off the tee became a par.

“Best break I’ve had all year,” Leishman said after the first round of 2018.

Rickie Fowler sent his approach to the 13th into the native grass, found it and took two hacks to get it onto the green, making double bogey. He bounced back with a pair of birdies and an eagle putt on the closing hole for a 69.

Dustin Johnson and Si Woo Kim also were at 69.

Adam Hadwin, the lone Canadian in the field, posted an even-par 73 to trail Leishman by six strokes heading into Friday’s second round.

Defending champion Justin Thomas hit his tee shot on No. 12 into the 13th fairway. That was the direction he took at the TPC Boston when he won a FedEx Cup playoff event last fall, but this wasn’t on purpose. He still did enough right for a 71.

Thomas played in the final group with Spieth, who wasn’t nearly as fortunate. Spieth had never shot over par in his previous 12 rounds at Kapalua. On Thursday, he had to get up-and-down from 167 yards on the downwind, downhill, par-5 18th just to salvage par for a 75.

He attributed it to adjustments he’s making with his putting stroke, trying to get it back to where it was a few years ago, and he needs more competitive rounds. That might explain his trio of three-putt bogeys.

Leishman had no such worries.

“It was nice to see some putts go in. Just gets the year off to a good start,” he said. “Hopefully, I can keep it going and see where we end up Sunday night.”

Leishman won the Arnold Palmer Invitational in March, and then ran away from the field at the BMW Championship during the FedEx Cup playoffs. It was a breakthrough for the 34-year-old Aussie, and it brought him back to Kapalua.

The last time was in 2013, when the wind was so strong that the opening round was scratched and the tournament did start until Monday, which was when it was supposed to finish. It was reduced to 54 holes. Leishman had a pair of 75s and tied for 23rd.

And that’s wasn’t even the worst of it.

“I remember I got food poisoning,” he said. “I threw up three times in the first five holes and they cancelled the whole day, so I was really happy. I remember spending a lot of time in a hotel room. Our son was almost 1 and we had the ‘Wiggles’ on repeat the whole week.”

It's all in The Takeaway. pic.twitter.com/t2mylP2g1B

That’s an Australian music group that plays children’s songs, with the subjects that Leishman couldn’t stomach.

“They’ve got a hot potato song. The have a fruit salad song,” he said. “So that was my main memory from the week. We didn’t get to spend any time at the pool. It was too dangerous, really. It was blowing the palm leaves off the trees. So we’re trying to make up for it this week, spending a lot of time at the pool and beach.”

He hasn’t neglected the golf.

The trade wind, typical for the Plantation Course but largely absent in recent years, made it play more difficult than usual. Leishman got into the mix with four straight birdies starting at the par-4 seventh with a 12-foot birdie putt. He made another medium-range birdie on the next hole, missed a 7-foot eagle putt on the par-5 ninth and then stuffed his approach on the 10th.

Johnson didn’t do anything special in his round of 69 and missed plenty of opportunities on the low side because the greens were slower than he anticipated. Thomas and Spieth, meanwhile, talked more about rust.

Thomas played the par-5s in even, thanks to a mental lapse on No. 9 when he failed to get it on the green with a flop shot. He three-putted from long range for par on the closing hole – long range at Kapalua meant about 110 feet just off the front of the green.

He played the final six holes in 2 under and was irritated he didn’t birdie them all from where he was.

“I didn’t play as bad as my score, so that’s what is a little disappointing,” Thomas said.