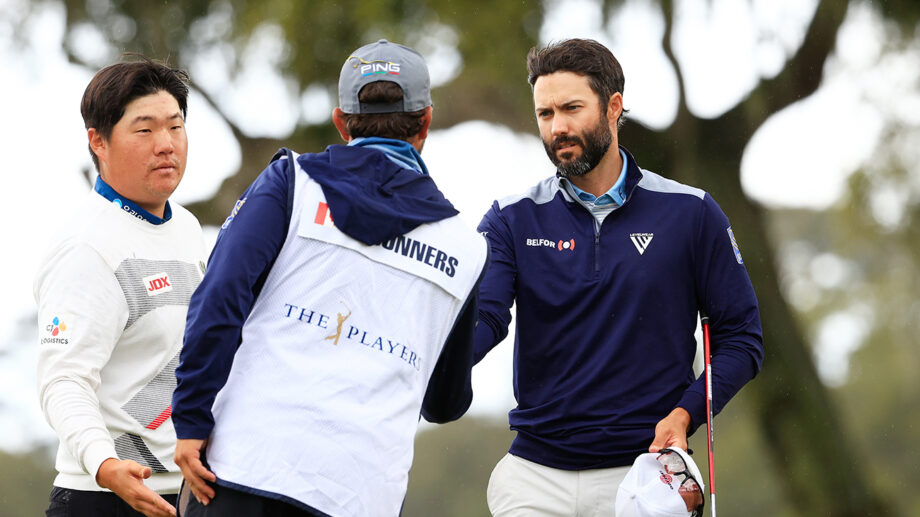 PONTE VEDRA BEACH, FLORIDA - MARCH 14: Sungjae Im of Korea and Adam Hadwin of Canada shake hands with caddie Danny Sahl, caddie to Corey Conners (not pictured) of Canada, on the ninth green during the final round of THE PLAYERS Championship on the Stadium Course at TPC Sawgrass on March 14, 2022 in Ponte Vedra Beach, Florida. (Photo by Mike Ehrmann/Getty Images)
Canadian Press

PALM HARBOR, Fla. (AP) – Sam Burns prefers to look at what’s next instead of what happened, and that was a big part in how he responded for a 7-under 64 and a share of the lead Thursday in the Valspar Championship, his first time as defending champion.

He used the phrase “flush and move on,” and that’s what he did. Twice after taking bogey, he took aim at the flag on tough par 3s and make short birdie putts. That featured an 8-iron to 2 feet on the par-3 17th and a 15-foot birdie putt on the final hole at Innisbrook.

Burns shared the lead with past champion Adam Hadwin, the well-traveled David Lipsky and Jhonattan Vegas, who had a bounce-back of his own variety.

Burns was closing in on the lead set earlier in the day by Vegas when his bunker shot from right of the 16th green came out soft and he missed the 10-foot par. He followed birdie-birdie.

“It’s OK to be frustrated,” Burns said. “I think it’s just what do you do with that frustration? Do you let it carry over to the next shot or do you address it, flush it and move on? I think that’s the most important thing.”

He felt the same way about his title defense. Burns didn’t get caught up in memories of closing with a 68 to win by three shots last year. The Copperhead course, a sturdy test even in the ideal scoring conditions, was among his favorites even before he won.

“The thing about last year is it has nothing to do with this year,” Burns said. “So many things are different. There’s not much correlation between the two. … I’ll look back forever on that event, it being my first win. Wins don’t happen out here often.”

Danny Lee was among four players at 65, Justin Thomas was another shot back and Dustin Johnson and Brooks Koepka led the large group at 67.

Hadwin, who won the Valspar Championship in 2017, finished with a birdie to cap off a day of remembering why patience is so important to the way he plays. It’s all about knowing when to attack for Hadwin, and even a little bad judgment worked in his favor.

He went for a front right pin on No. 6 with a pitching wedge when he says he should have taken a safer approach with a 9-iron and leaving a 15-foot putt. No matter he chipped in for birdie. And on his final hole at No. 9, uphill and over a bunker, he had about the same yardage.

His strategy is simple: “Keep it out of the water, hit as many greens as possible.”

Lipsky went to the same Los Angeles-area high school as Collin Morikawa. He’s 9 years older than the two-time major champion, and his road to the PGA Tour wasn’t quite so smooth.

“I just wanted to play wherever I could,” he said. That took the 33-year-old Californian to a pair of wins on the Asian Tour and the European tour, and a Korn Ferry Tour win _ the same day Morikawa won at Muirfield Village _ that eventually led to a PGA Tour card.

Lipsky played bogey-free at Innisbrook, which he described as one of “crusiest” rounds he could play. He was rarely in trouble. His birdie putts were on the short side. The few times he had to save par, the putts were never far out of range. And he signed for a 64. Cruising.

As for Vegas? He needed a round like this.

Still stinging was his finish Sunday last week at The Players Championship. Despite hitting two balls in the water on the island-green 17th at TPC Sawgrass, Vegas came the par-5 ninth hole right on the cut line and 25 yards from the hole in two shots.

He he bladed a gap wedge over the green and into a bunker, made bogey and missed the cut.

The recovery process is off to a great start.

“Absolutely great,” Vegas said. “Exactly what I needed after last week. Game was there. I took advantage of the great conditions this morning. Greens are a little softer, not much wind, absolutely a perfect day out here.”

Vegas gave his round a boost with a 4-iron to 6 feet for eagle on the par-5 first hole after he made the turn. He had a 25-foot birdie on the par-3 fourth, a tough putt from right of the hole that can get away from players if they’re not careful, and a 6-foot birdie on No. 7.