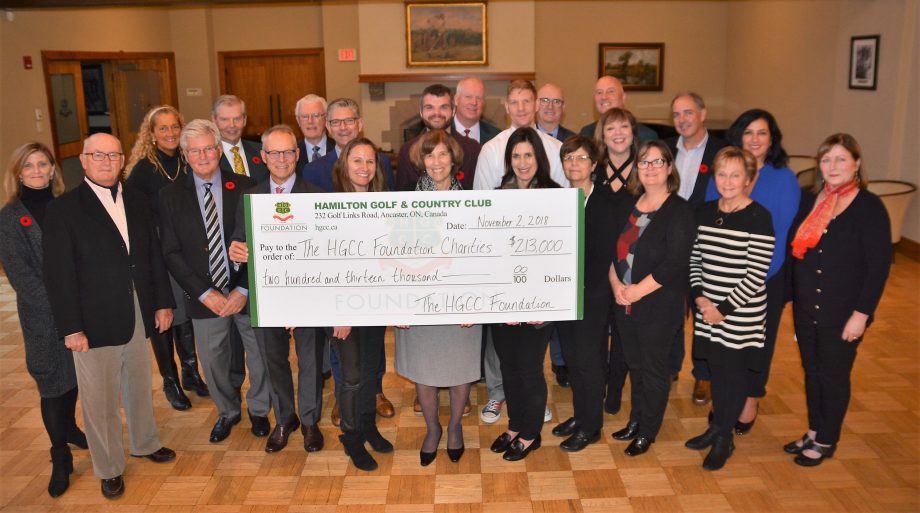 HAMILTON – The Hamilton Golf & Country Club (HGCC) Foundation lived up to its vision for a better tomorrow, donating $213,000 to six community charity partners for 2018 earlier this month.

There were beautiful smiles all-around as the six local charity partners gathered with the HGCC Foundation Board and other members to celebrate the spirit of giving and recognize the incredible work these charities perform in Hamilton and surrounding areas.

“Our heartfelt thanks too, goes out to the HGCC Foundation and the members at the club,” says Donna Marcaccio, Executive Director, Rygiel Supports for Community Living. “It is wonderful to see people working together to improve the lives of others. This is such a giving community.”

“On behalf of the McMaster Children’s Hospital Foundation and more specifically The Pediatric Palliative Care Project, I would like to thank everyone at HGCC for this incredible donation,” added Dr. David Lysecki, Pediatric Palliative Care Specialist. “We have made great strides in our first two years and I’m excited to announce that we are adding two full-time doctors to the program in 2019.”

In its first year 75 per cent of the young cancer patients died in hospital. This past year the number dropped to 40 per cent as more youngsters died at home or in their community surrounded by loved ones. Dr. Lysecki explained that the program gives families/parents/children more options to consider when a child is dying from a terminal disease.

“The program is really just getting going and HGCC is at the ground floor of starting this,” Dr. Lysecki says, noting the end goal is to develop/build a children’s hospice in Hamilton.

Funding for the Foundation comes primarily from two charity golf tournaments – The Borthwick Memorial Golf Tournament sponsored by Turkstra Lumber and the women’s Golf for a Cause Golf Tournament sponsored by ONE for Freight. Funding for these charity partners traditionally lasts for a three-year period and then different charities are chosen to take their place, although ACS receives an on-going annual donation.

“I’d like to thank the HGCC Foundation for the generous donation to Neighbour to Neighbour’s Hamilton Community Food Centre that operates in the Rolston neighbourhood of Hamilton, an area with high rates of poverty, food insecurity and new immigrant populations,” says Shane Farraway, Communications & Events Coordinator at N2N.

“The $40,000 will go towards the various preventative programs and initiatives we’re are undertaking at the centre including; teaching families how to create inexpensive, fresh and healthy meals; helping end senior isolation and assisting new families in Canada gain a sense of community in new surroundings. We are just getting started building a broader, more inclusive community in Hamilton. So once again thank you. Your support means the world to us as we reach out to others.”

“We just want to say thank-you. With this new funding we’re going to be able to launch a new and much needed program – Diverse Communities Outreach in north Hamilton. It will focus on building partnerships to under-served communities in our city, including newcomers to Canada, those of diverse communities and/or lower socio-economic groups,” says Aileen Bradshaw, Executive Director for the Alzheimer Society of Hamilton and Halton.

“In delivering the program, families living with dementia in the target communities will be better able to prepare for the dementia journey and manage the day-to-day realities this brings.  At a community level, the program will help families better connect with existing community supports which will encourage their participation in their community and reduce the social isolation that often accompanies a family living with dementia,” Bradshaw added.

At Ancaster Community Services, the $20,000 will be directed at youth support. “We have a lot of new faces. There are issues in growing communities. Youth in our community need support. There is poverty in this community,” says Melanie Barlow, Executive Director, ACS. “We’re thankful to all those people who work so hard and give through The Borthwick Tournament. I’d like to express our heart felt gratitude to HGCC members and the HGCC Foundation. We are so grateful for the support and hopefully next year we will have sunny skies for the tournament.”

HGCC member Cathy Sullivan, who volunteers at De Mazenod Door Community Outreach at King Street and Victoria Avenue in downtown, accepted the cheque on behalf of the organization. Her co-chair for Golf for a Cause, Deb Cacioppo, shared a few personal thoughts on being part of a team working for the greater good.

“I would like to begin by thanking all of the Foundation Executive lead by the capable and generous team of friends – Alan Scott and Brian Short. Gentleman, you have been precisely that – Gentlemen leading others towards the common goal of helping those in need by our club.

May history record your generosity of spirit and kindness passed along to those in tremendous need,” Deb says, noting her team was greatly assisted by Lori Serafini, Christine Heagle, Jill Winch and Marg Chapman.

Today, she reflects on the 400-plus street people who depend daily on De Mazenod Door for breakfast and lunch – knowing that many of them suffer from mental illness and have nowhere else to turn at this moment in time in their lives. 365 days of the year, De Mazenod Door is there for them.

“Every guest is treated kindly and respectfully and with dignity. Despite what the volunteers see before them or even what they hear. They feed all races, religions, they feed the young, the old, men, women, addicts, alcoholics, the handicapped and the homeless. They ask for nothing of them, but their first name so that they can say . . . “Have a nice day Mary or Barb.”